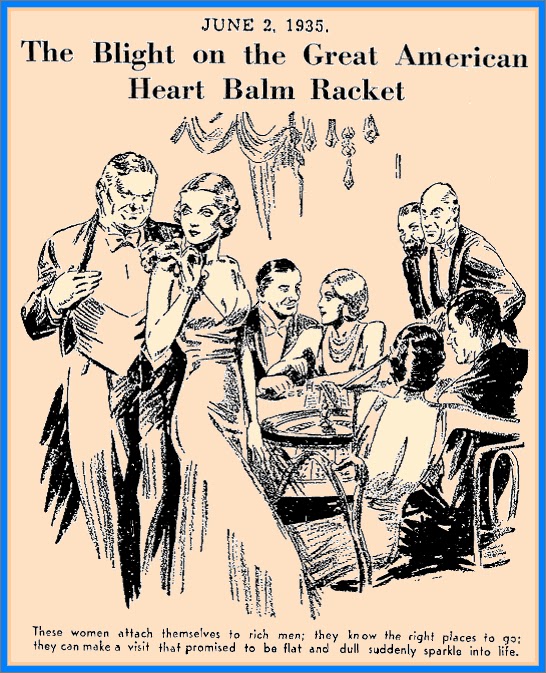 FULL TEXT: The brilliant daughter of a brilliant father did a fine thing not long ago. She proposed to the state legislature of Indiana a bill that has become state law, and that has been copied by New York and several other states. Some day in the not too distant future the law may become a federal regulation.

The woman is young and charming, with an intelligent, fine face; she is married and has a son and a daughter. A member of the state house of representatives of Indiana, Roberta West Nicholson has the further distinction of being the daughter-in-law of the late Meredith Nicholson, writer of many best sellers.

The new law prohibits all suits for alienation of affection, breach of promise and seduction. It is a death blow at the power that has been held for so long by languishing ladies, whose love, trustfully extended to kindly elderly gents encountered in night clubs and at race tracks, is subsequently found to have had a value of two hundred and thirty thousand dollars and scrupulously estimated odd cents.

Mrs. Nicholson contended that most actions for breach of promise and alienation of affection have extortion as their motive. We all know that. When we pick up our morning newspapers and see the injured woman, when we study her vapid face and her permanent wave, we know perfectly well that not a natural tear has ever fallen from those bright calculating eyes, that the thick lacquer of that soft, characterless mouth has never been jeopardized by a tremble. The mere headlines. “Claims Heart Broken –  Bitterly Regrets Impulsive Reciprocation of Elderly Midas’ Affection,” tells us just what sort of woman she is.

That the Nicholson bill became a law in Indiana, where it was drafted, and has been rapidly adopted in other states whose citizens are interested in whittling one more phase of the law into terms of modernity and honesty is a step toward sanity and dignify; and we need sanity and dignity if ever a nation did. It is humiliating to balanced women to read, day after day, of the Peaches and Rhodas and Peggys whose fantastic affairs of the heart are spread so lavishly over the front pages of the morning paper.

“She gets three thousand dollars for eighty letters,” thinks some decent little girl in an obscure country town somewhere, or some discouraged factory worker, whose honor and integrity haven't brought her more than a bare living. And into her heart comes the idea that there are easier ways to obtain big checks and heavy furs, and diamond wrist watches than working for them! Why should she work hard for fifty-two weeks a year for so little, when this other girl not any smarter or prettier than she, merely has to flatter some fatuous old man into writing her a promissory letter to be made independent for life?

The heart balm law suit has become one of our most profitable rackets. Women –
certain types of women – have become as sharp as weasels in perceiving chances to establish claims of this sort, find rich men go in terror of their lives. One famous case was that in which a generous, sympathetic wife offered her city house to a certain attractive widow with two small children. The widow was penniless, the woman was taking her children away to the mountains; she couldn’t bare to think of those babies trapped in a slum, while her cool apartment in the breezy East Fifties was empty.

During the course of the summer the husband, who was living at a club, went home three times to look up a book or an old suit or some other small possession, and at the end of the summer the widow sued him as father of her unborn child. Eventually, she was exposed as a professional blackmailer, but the tenants of the once happy apartment never will recover from the effect of the law suit and the shock.

A very rich and popular professional man, who happens to be a bachelor, told me some years ago that he never could ask a woman friend to dine with him unless he asked other friends, too. “Twice women have accused me of luring them into my house to take advantage of them,” said this cultured, gentle, simple man. “In each case the sum mentioned was half a million. Both times I compromised out of court for much less – it’s not pleasant, of course, but I can’t afford to face that sort of case.”

Another man, this one younger and extremely rich, was asked to dine at a certain San Francisco home some years ago by the daughter of the house, a restless little debutante, obviously anxious to make a good match. When he got there, expecting to find a formal dinner in prospect, he girl was alone, and in a lace negligee and slippers, and the dinner was served by a foreign born maid, who later testified to the loving relations of the pair. The girl announced to her mother that Herbert, under promise of marriage, and so on and so on and so on. This cost the boy one hundred thousand dollars.

Drifting about Europe are many beautifully groomed, clever, attractive women whose only business is blackmail. They attach themselves to rich men; they speak languages charmingly, they know the right places to go, they can make a visit that promised to be flat and dull suddenly sparkle into life. They are very much al home at the race tracks, the theaters, the smartest cafes. They introduce titled strangers, and often the titled strangers have enough that is real about them to convince the American visitor that he is making a tremendous hit in the highest circles of European society.

In the thrill and delight of such a friendship, notes are exchanged; pet names are scribbled on dinner menus and programs, and the appreciative man goes lo Cartier's or Chanel's and sends his lovely cicerone a handsome bag or a jewelled clip. These notes, these bags, these clips he sees again when her lawyer calls. His spirit dies within him as he imagines himself trying to explain to the judge just how harmless and merry and unthinking the whole thing has been!

A certain woman has recently successfully claimed a fortune for a few letters from a man whose tremendous wealth has made him a target for this sort of thing all his life. One would think that any judge would merely laugh in the face of an attorney who once more attacked him from this angle, but even without the slightest evidence against him, such a man, just for peace, often takes the easier way of compromise rather than fight. Commenting on this case another man casually expressed his opinion of the woman, whose life history is – well, unusual, to put it nicely. Now she is going to sue the second man for a second fortune, for defamation of her character.

Real affection probably never has figured in such a suit. It is impossible to imagine that a woman who cares for a man, whose heart is deeply wounded, whose affections have been betrayed, could produce in court the letters that once made her so happy, commercializing the pet names and the intimate hours, putting a price on every kiss. Not the most desperate poverty would force a woman of any fineness to such a step.

So more power to the law that will make it impossible for any woman to trap a man, young and silly, or old and sillier, into the miseries of a law suit over this sort of thing. I never saw a “love balm” case yet in which the woman was not of an age and type to know exactly what she was doing; there is very little “leading astray” in these sophisticated days. Girls will always have the privilege of breaking engagements when they feel like it, and it is ridiculous to refuse men similar rights. If the engagement hasn't overstepped its proper boundaries both the jilted girl and the jilted man are pretty sure to feel in time that the break before marriage is a better way out than the divorce afterward.