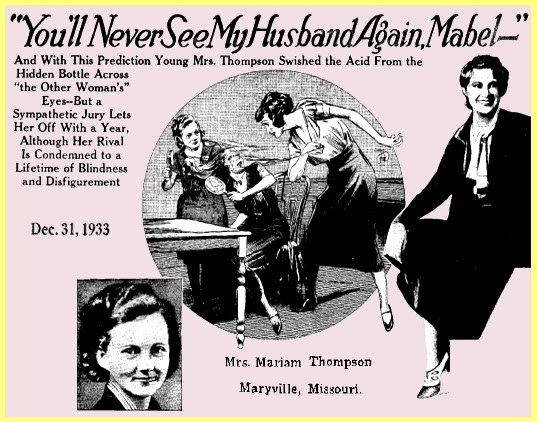 And With This Prediction Young Mrs. Thompson Swished the Acid From the Hidden Bottle Across “the Other Woman’s” Eyes – But a Sympathetic Jury Lets Her Off With a Year, Although Her Rival Is Condemned to a Lifetime of Blindness and Disfigurement

FULL TEXT: Mrs. Mabel Burris Higgins was looking with youth’s bright eyes at her own charming reflection in the mirror as her younger sister, Rosemary Burris, made playful experiments in dressing Mabel’s hair.

Little did the 22-year-old matron dream that it was to be the last time she would ever fully see her own pretty face.

The two girls giggled and chattered as their mother, Mrs. Harvey Burris, prepared dinner in the good-sized and old-fashioned kitchen of their farm outside of Maryville, Missouri.

Tragedy was approaching in a form that many women would consider worse than death. The screen door squeaked and in tragedy came, but none of the three women recognized it in the shape of Mrs. Mariam Thompson, their 26-year-old neighbor, who was always welcome to enter that way, without knocking.

The three women exchanged friendly greetings with their caller, who smilingly asked if she could have a drink of water. Mrs. Burris, busy over the range, told her that she would find a glass at the sink. Mrs. Thompson quietly went to the sink and bent over it, but instead of getting a drink she took the cork out of a bottle of carbolic acid. Then, walking past the unsuspecting Mrs. Burris, she approached the two laughing sisters, and suddenly cried:

At this three faces turned toward her in surprise. She wanted only one of the faces, that of Mrs. Mabel Higgins. Right into Mabel’s bright eyes, wide with surprise, Mrs. Thompson swished the acid as she cried: 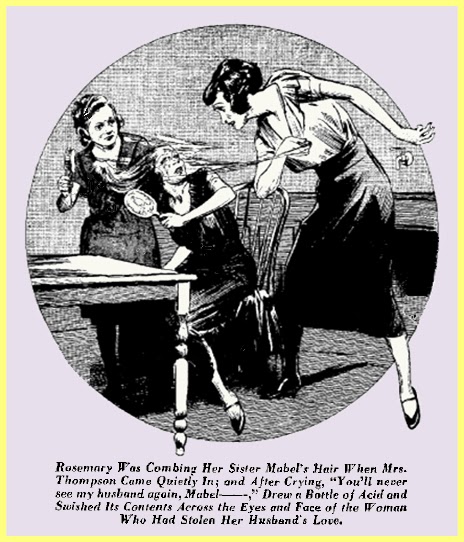 There was an instant of stunned silence, as the caller started hastily toward the door. Then came a gasp that turned into a shriek, as the acid began eating.

Rosemary dashed out the door to seize Mariam while Mrs. Burris rushed to the aid of her tortured daughter. Outside the door Mrs. Thompson whirled and threatening her pursuer with the bottle said:

“Maybe you want some of the same dose.”

Rosemary’s own burning hands upon which some of the acid had splashed, and her sister’s shrieks told her what that dose would be. She backed away. She might have defied a pistol or a knife, but what girl could face a thing that makes one blind and hideous to look at? So Rosemary backed away and Mariam ran for the street.

Mr. Burris, hearing the cries of his daughter, rushed in, was told what had happened and without a word, picked up a baseball bat. “With this he pursued the acid-thrower.

When Mabel’s father caught up with Mrs. Thompson, he hesitated. After all she was a woman, and the old instinct never to hurt one, no matter what she had done, held his angry arm long enough for a doubt to arise. Perhaps Mabel wasn’t blinded or even hurt much. As he explained afterward:

“You never can tell about women. Sometimes they keep quiet when they are dying, and then again they yell bloody murder, when they are more mad than hurt.” 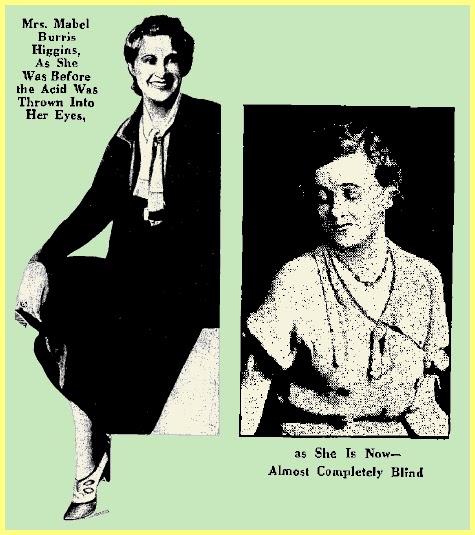 Manlike, Burris went back to make sure, and by the time he know the worst the acid-thrower had made her escape. Mrs. Higgins was rushed to St. Francis Hospital where for a lime it seemed that she would die from the pain and the shock of knowing what had happened to her. She wanted to die but they would not let her, finally saving her life and a little of her sight.

Enough so she can see dimly out of one corner of one eye. The rest of her vision is lost forever and with it the good looks which caused the tragedy. This happened last July. Mrs. Thompson was arrested and the other day came to trial at Maryville, charged with assault with intent to maim. Before a crowded courtroom the whole story came out. It had all been over the love of Mariam’s husband, John Thompson. John and Mariam had been boy and girl sweethearts in school, where he had been the most admired boy in the class and she, as its smartest pupil, the class valedictorian, at the age of eighteen.

Then the smartest girl and the most attractive youth were married; which seemed like a good match.

But John had been too attractive and women had kept on being fascinated after he was married. There were several affairs which the defense asserted had made Mrs. Thompson worried and jealous. However, she said that these had not lasted very long, and between times he had always been a good provider as well as attentive and affectionate. Also they had a son, almost four years old when she discovered the affair with Mrs. Higgins. The other transgressions had been endurable and forgivable, but this was different. She said that Mrs. Higgins had actually asked Mrs. Thompson to give up her husband to her. 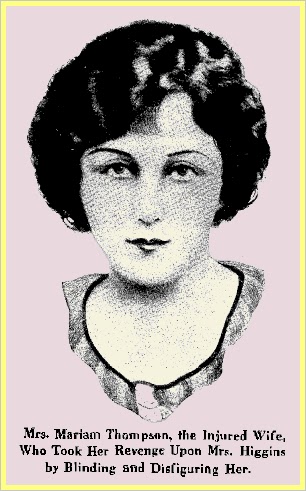 This, Mariam said, caused her to become temporarily insane.

That insanity would be the defense was guessed soon after the acid-throwing when it was rumored that Mrs. Thompson had burst into the hospital where her victim was suffering agony and had threatened to do her further injury. It was said that the hospital nuns carried her out of the building, kicking and screaming.

On the stand, the acid-thrower, facing a possible five-year term in the penitentiary, seemed not only sane but keen-witted as she related to the jury how her victim had told her of her love for John and had urged Mariam to give him up to her. After that visit she had confronted her husband with his infidelity, but he had assured her that he was “all through with that woman” and in order not to be bothered with her attentions was gelling her a job at St. Joseph, forty miles away.

Mrs. Thompson said Hint she believed this for a while, but had increasing suspicions, because that job never materialized; while her husband was away many nights when she knew that Mabel was also not at the home of her parents. Finally came positive proof in the form of a passionate letter from the other woman, which she found in one of her husband’s pockets. The letter was not introduced in evidence hut Mrs. Thompson was allowed to quote from it. Resides ninny other avowals of love, she said that Mabel had said that if she was ever to have any children they would he by John.

The night before the tragedy, Mariam related, John and Mabel were away again all night, and in the morning, she said, her husband confessed to her that he and she had spent most of it in a parked car, outside of St. Joseph. That confession, she testified, was the last straw. Her mind had become a blank from that moment until her husband informed her that Mabel might die of the acid burns. To substantiate this plea of temporary insanity further testimony was introduced.

Other witnesses said that Mrs. Thompson’s grandfather had in recent years become entirely incompetent mentally, but Judge D. D. Reeves remarked that a certain mental degeneration in a man of eighty-four years of age did not strike him as any indication of hereditary insanity.

The dramatic high spot of the trial came when Virgil Rathbun, prosecuting attorney called his star witness to the stand, the victim herself. The spectators gasped as they saw what had once been a gay and pretty young woman, come groping slowly down the aisle. Heavy smoked glasses, such as blind beggars wear, covered her ruined eyes but these did not hide the livid scars where the acid had eaten away the soft skin of her cheeks. With head turned sideways that she might see out of that one remaining useful corner of an eye, Mabel reached the stand. 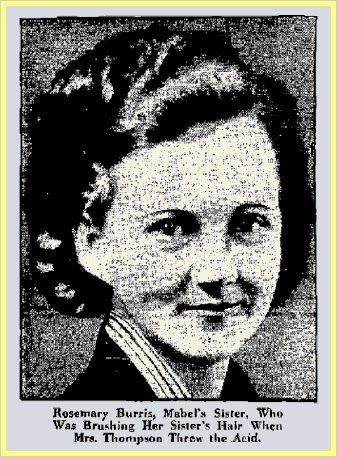 The main purpose she was to achieve was to have the jury see for themselves just what damage had been wrought by Mrs. Thompson’s jealous fury. To do this she would have to take off those black spectacles which meant that everyone else in the courtroom would also see. When the realization came over the wretched woman that probably every young man who had admired and wanted her and every girl who had envied her attractions might be there to stare and shudder, it was too much. Rather than suffer this public humiliation, it would be better to let the woman who had done it get away unpunished. Mabel burst into hysterics and finally had to be carried out of the courtroom.

As usual in a criminal trial, the defendant had the advantage of the law’s technicalities. Mrs. Thompson’s lawyers were free to introduce all the testimony they liked to prove how she had been provoked by her husband’s behavior with Mabel and other women. The effect of this on the jury’s sympathies would be largely neutralized if the state could show that Mrs. Thompson had been equally faithless to her husband. The prosecution proceeded to try to do this but the court struck it out as irrelevant.

The jury, after several hours deliberation, brought in a verdict of guilty, fixing the penalty at only one year in the county jail. Mrs. Thompson heard it apparently unmoved, as well she might. The year will pints quickly enough and she will then emerge, still young, with sight and good looks unimpaired and fully conscious that the women she hales has been sentenced for life to disfigurement and at least a three-quarter blindness. But even that does not satisfy her lawyers, who have appealed the case. 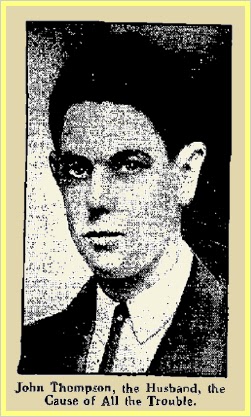 Nevertheless one promising thing is to be noted. At least for once a jury has refused to swallow that threadbare “mind-was-a-blank” story, the most convenient of all defenses. The defendant has only to assert that at a certain convenient moment his mind went blank and remained that way until another equally convenient moment when he became normal again. When the prosecutor asks him questions covering anything in that period which might reveal that it was no act of temporary insanity but a calculated, cold-blooded crime, the defendant glibly answers:

“I don’t remember—my mind was a blank.”

When she conies out of jail, Mariam will have the further bother of defending damage suits which Mrs. Burris and Rosemary have brought against her. Also during that year she won’t be able to keep much of an eye on her husband.

There is something else Mrs. Thompson may worry about. Many years ago Holbrook Blinn produced a one-act play, “A Kiss In The Dark,” in which a discarded mistress blinded her ex-lover with vitriol. Later the blind man lured her into his grasp and evened things up by blinding her in exactly the same way. Then he cried: “Now kiss me – a kiss in the dark!”

That was fiction, but Mr. and Mrs. Isador Meyerson of Brooklyn did the same thing to each other in real life.

First she blinded her husband but escaped punishment on the plea that it was not jealousy hut self-defense.

Years later her husband got hold of her one night, and with a handkerchief soaked in the acid of a radio battery, evened up the score between them, exactly as did the blinded lover of “A Kiss in the Dark.”

Will Mrs. Thompson go to bed every night the rest of her life with the dread of waking to feel groping hands at her face and a burning rain falling into her eyes?