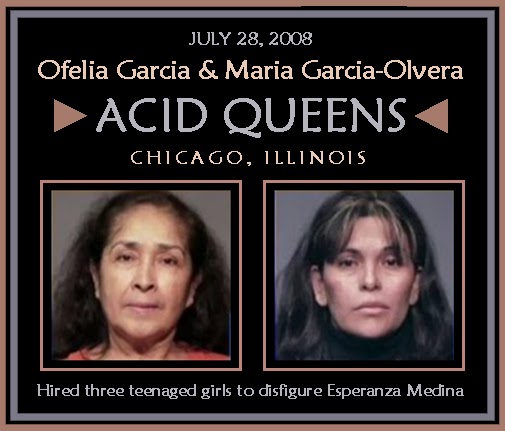 Chicago, Illinois – Mother and former daughter-in-law Maria Garcia-Olvera, 35, and Ofelia Garcia, 58 recruited three teenaged girls to attack Esperanza Medina, a social worker and mother of four, with sulfuric acid on July 28, 2008. The assault left  Medina with burns over 20 percent of her body, severely disfiguring her face. At the time of conspirator’s trial more than two years after the crime Medina had undergone 17 skin graft surgeries.

Medina said she initially thought the caustic acid thrown on her was coffee, but when she saw the look on her boyfriend’s face and heard her neighbor scream, “My God, look at you!”, she knew immediately that the liquid was not coffee.

Garcia, 60, plotted revenge with her ex-daughter-in-law after Garcia’s longtime boyfriend, Gustavo Alvarez, ended his romantic relationship with both women in 2007 in order to live with Medina. The two tracked Medina to her Chicago home and then staked out her apartment three times in the weeks before the attack to learn when she left for work.

They two women recruited three teenagers to douse Medina with a bottle of acid, then hit her with a baseball bat and steal her purse to make it appear as though robbery was the motive.

Garcia-Olvera and Ofelia were convicted on September 29, 2010 of three counts each of heinous battery. The elder of the two was sentenced to 44 years in prison and the younger Garcia was given 42 years. The three girls, whose names were not made public, were, as minors, prosecuted in juvenile court.