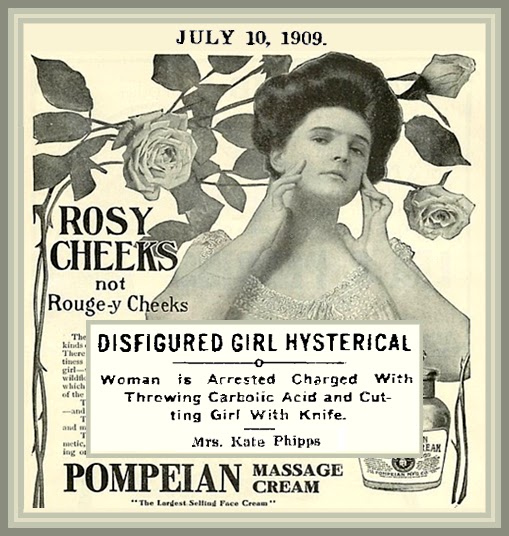 FULL TEXT: Lexington, Ky., July 10. – Mrs. Kate Phipps has been arrested charged with disfiguring Mary Ryan, a girl who was mysteriously attacked in a stable. The girl’s identification of the woman was dramatic.

Mrs. Phipps is a neighbor of the girl and during the latter’s delirium has called frequently to inquire about the girl’s condition. Miss Ryan was in her right mind when Mrs. Phipps called. On sight of Mrs. Phipps the girl screamed and became hysterical. Miss Ryan declared that the woman who attacked her said as she made the onslaught:

“If I can't have rosy cheeks, you can’t. Everybody likes you: nobody likes me.” She then threw carbolic acid in her face and cut her with a knife on the cheeks and hands. Mrs. Phipps says she did not make the attack.