A Feminist Hoax in 1910: The Strategy of Dissimulation Exemplified 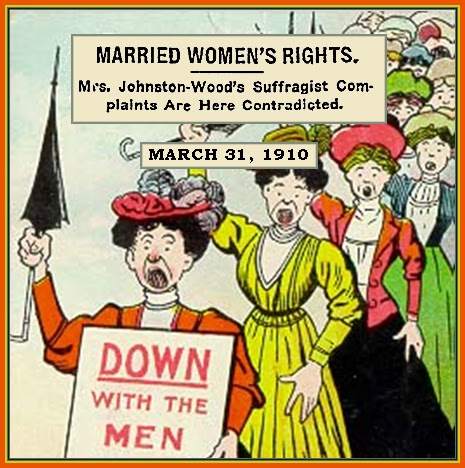 FULL TEXT: It seems desirable, even necessary, to correct two misstatements made in “Laws Discriminating Against Women in the State of New York,” by Hariette M. Johnston-Wood, as quoted in The Times of March 26. Mrs. Johnston-Wood says, “A wife cannot make a binding contract with her husband to pay her for services within or without the household.”

A married woman has all the rights in respect to property, real or personal, and the acquisition, use, employment, and disposition thereof, to make contracts in respect thereto with any person, including her husband, and to carry on any business, trade, or occupation, and to exercise all powers and enjoy all rights in respect thereto, and in respect to her contracts, and be liable on such contracts as if she were unmarried; but a husband and wife cannot contract to dissolve the marriage or to relieve the husband from his liability to support his wife.

Again, Mrs. Johnston-Wood says, “The father’s right to the custody of the child is paramount.” I suppose she refers to Section 80 of the Domestic Relations law, but she omits to quote, and, therefore, fails to make it clear, that when “a minor shall acquire real property the guardianship of his property. *** belongs first to the father, and, second, if there be no father, to the mother.” Section 81, however, deals with the child, and not his property, and that declares: “A married woman is a joint guardian of  her children, with her husband, with equal powers, rights, and duties in regard to them.” And *** “Either the father or the mother may in the lifetime of them both, by last will duly executed, appoint the other the guardian of the person and property of such child during its minority.”

It is not less desirable and necessary to correct the general impression made by Mrs. Johnston-Wood in her compilation of laws regarding women and labeled as discriminating against them, because unless any set of laws is considered as a whole we get those half-truths which are always dangerously deceptive.

The “common law,” on which the law of the State is based, has always recognized the family as the social unit, and hold the husband and father responsible for its welfare. There is in the minds of some persons at present, and Mrs. Johnston-Wood seems to be one of the number, a disposition to ignore, or decline to recognize, this point of view, and to declare that the individual, in contradisctinction to the family, is the social unit. To insist upon reviewing the law as it stands while refusing to recognize the spirit which gave it birth, and to look at it through the distorted medium of deliberate misunderstand, is as foolish and misleading as it is disingenuous, and quite unworthy of even a special pleader. 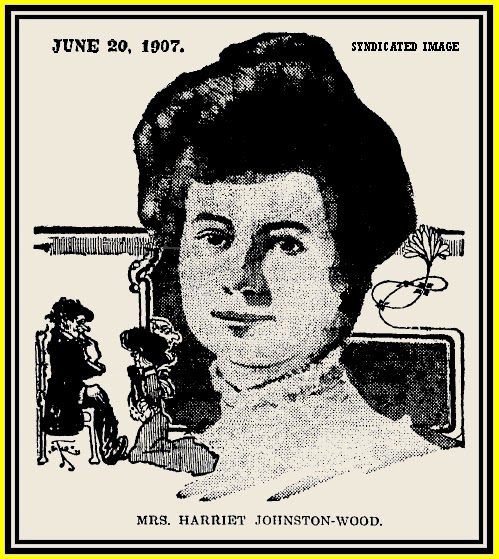 Because the husband and father was and is responsible for the subsistence of his wife and family therefore he was recognized as logically the proper person to administer and inherit the property of the family; but as time wore away the barriers raised for protection became coercive between the family and the world; as individual life began to call women out of the home, and property amassed by the wife was claimed by the husband and used sometimes for his benefit rather than hers, the gradual changes began to take place which have in the last thirty or forty years entirely changed the relation of the wife toward property and the guardianship of her children. this change has all been in the favor of the wife and mother, and one after another the privileges which men had over the property of their wives and the guardianship of their children have not only been lost but many of them have been actually reversed. The legal relations are as though they were unmarried, excepting marriage. The wife cannot release the husband from the obligation to support her.

The italics are mine, as I wish to call attention to the fact that throughout these laws it is assumed as an unalterable condition that when a man marries and makes a woman the mother of his children he thereby incurs the responsibility for her and their support, a responsibility the wife never shares

For over thirty years a woman has been able to hold and enjoy her separate property, however acquired, even when it has been given by her husband, freed from any interference or control by him, and from all liability for his debts. A husband is, however, liable for necessaries purchased by his wife and also for money given his wife by a third person to purchase necessaries, and he is bound to support her and her children without regard to her individual or separate estate. Even when a separation occurs a husband is compelled through the payment of alimony to continue to support his wife, nothing short of infidelity on her part and consequent divorce relieving him of that liability. No obligation, however, to furnish necessaries to a husband rests upon the wife under any circumstances whatever.

A woman may sell, assign, or transfer her real and personal property and carry on any trade or business and perform any labor and service on her separate account, and her earnings are her own sole and separate property. Mrs. Johnston-Wood says that “the joint earnings of husband and wife belong to the husband,” but she forgets to add that out of those joint earnings the wife must be supported, and that if they are large enough to be invested in real estate it becomes impossible  for the husband to sell or devise it except subject to her dower right. Through this “dower right” Mrs. Johnston-Wood complains that a husband is obliged to lease only one-third of his real estate to his wife, and that she has only a life interest in it. On the other hand she can buy, sell, give, or will away her real property as freely as though she were unmarried without any right of interference by him, and without any claim of his upon it. This dower right is a very real and active line upon a husband’s estate, while the so-called “courtesy right,” which is supposed to offset it, is a very shadowy affair, and has been seldom exercised as to make it difficult to find authorities defining its exact limits and privileges. 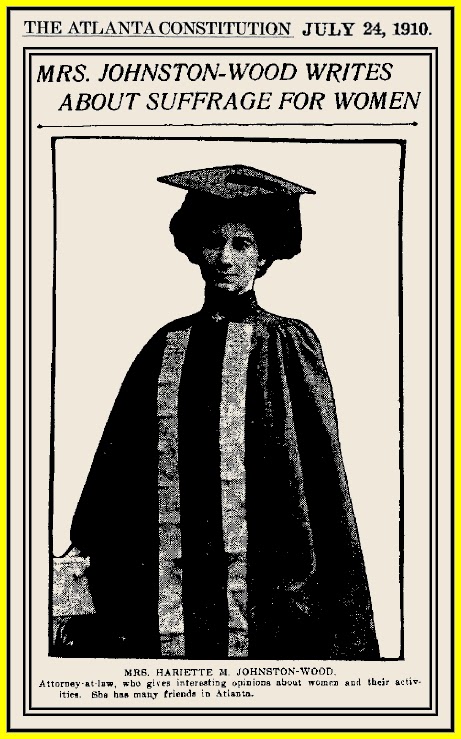 A husband has no right to any of his wife’s estate until after the birth of a living child, and this right is so lightly considered that a wife may absolutely defeat it at any time without the consent of her husband, either by conveying her real property during her lifetime or by devising it by will. Should he inherit through “courtesy” right his, too, is only a life interest.

A husband is not obliged to leave his personal property to his wife, but neither is the wife obliged to leave any to her husband. there is no “discrimination against,” they stand on an equality.

Mrs. Johnston-Wood complains that a woman cannot make a binding contract with her husband to be paid for her services. But she doesn’t have to do so. He is obliged to support her, but she can go into any business she pleases, keep all the profits, and still demand support from him. A husband has no claim against his wife’s estate for having supported her, but if she supports him, as by keeping a boarding house, and he acknowledges the debt, she has a valid claim for reimbursement against his estate.

Generally speaking the rights of a wife against her husband are such as he cannot deprive her of, while his rights against her depend entirely upon her consent, and she can deprive him of them at any time with the greatest of ease. 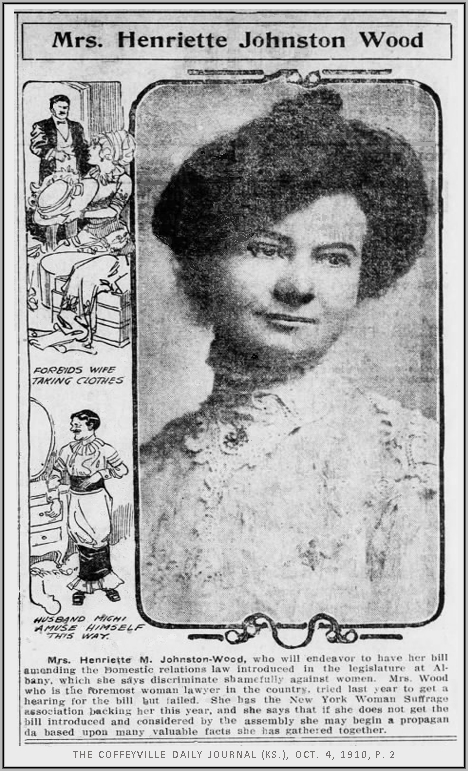 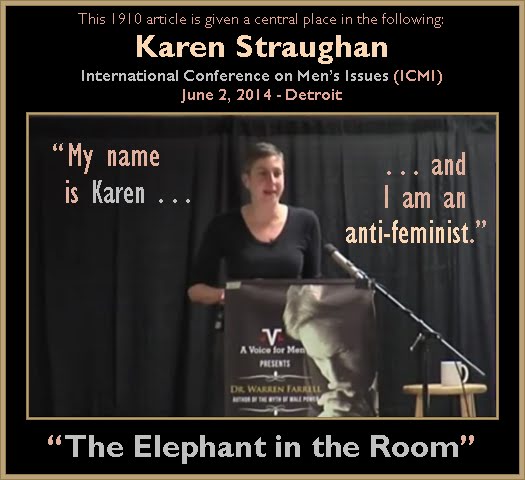 This 1910 article is given a central place in Karen Straughan’s famous 2014 talk at the ICMI in Detroit.