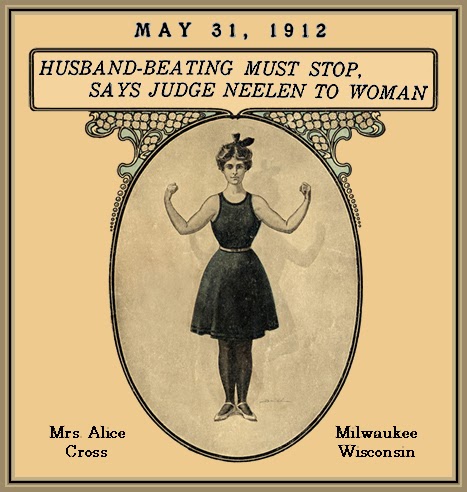 FULL TEXT: Mrs. Alice Cross’s husband, Fifteenth-av, was sitting peacefully in the new rocking chair in the parlor Thursday night, he says, darning his wife’s dress, when the head of the house (Mrs. Cross) became angry, and began to upbraid him.

“Don’t be angry, Allie,” the husband says he pleaded. “Haven’t I always tried to please you in everything?”

This made Mrs. Cross so cross, the husband says, that she gave him a black eye, threw him out of the house, and broke up the furniture. He sought the aid of the police.

Mrs. Cross had retired, but that did not prevent her putting up a battle with three patrolmen, they say, and long deep scratches on their faces were shown as evidence.

‘This husband beating has got to stop,” declared the court. “Here is a poor man doing the best that he can, yet is abused and thrown into the street by a cruel and unfeeling wife. What sort of a wife is it that will treat her poor husband in this manner? I don’t know but what I’m in favor of a whipping post for husband beaters. A big strapping woman abusing a small weak husband like this is a painful sight.”

The court fined Mrs. Cross $1 and costs or ten days. “Sober up and see if you can treat your husband as a good husband ought to be treated,” he said.