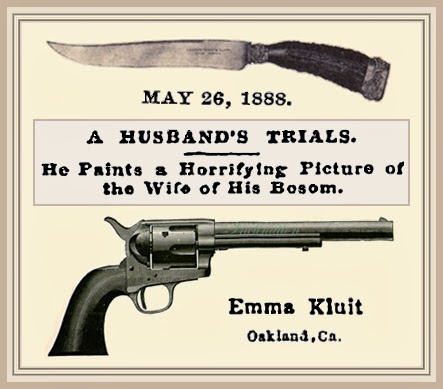 FULL TEXT: The divorce suit of Adrian Provo Kluit against his wife Emma, on the grounds of cruelty, involves some well-known Oakland people. Kluit was formerly a collector for Barnard & Co, coal dealers, but shortly after his marriage suddenly fell heir to $60,000. Mrs. Kluit was formerly Mrs. Frances Emma Cross, and his housekeeper. If Mrs. Kluit’s allegations in his complaint approach the truth, the marriage with Mrs. Kluit was a bigger undertaking than many men would care to enter upon. He says that she had a prevailing hankering to carve out his liver with a knife. Sometimes it was a carving-knife, and at other times her fickle fancy hit upon the long-bladed variety of cutlery. The first time she sought to carve him, he alleges, was in the second month of their love-laden honeymoon, in December 1886. A year afterward at their Haywards ranch, he charges that the carving mania again seized her, and only was her desire unfilled by the averting hand of the Chinese cook. Last month, he says, her weakness took a new form, and pistols as an element in his projected destruction became her favorite. On the 26th day of April, he alleges, her daughter kindly prevented her from boring him with bullet holes. Consequently he is desirous of barring himself out of her reach by a divorce decree.

[Note: Original has a typo, spelling the same as “Kruit” in one instance.]