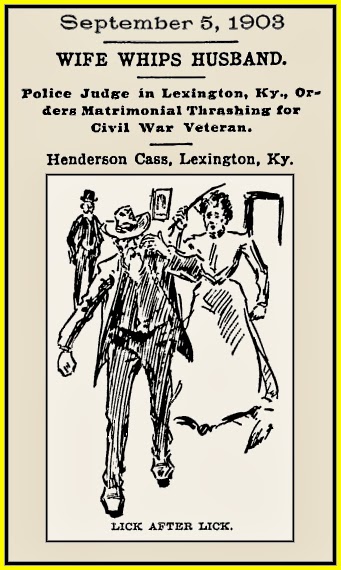 Following is a brief news report which tells a story that contradicts the official “herstory” fairytale narrative of domestic violence in the bad old days.

A wife whose 76-year old war veteran husband spent money on himself because he “wanted to have a good time” is reprimanded by a judge for such “abuse” of his wife. The appropriate treatment of an elderly Civil War veteran accused of such “abuse” was deemed to be having him trashed with a buggy whip in public by the “abused” wife. Makes sense, right?

FULL TEXT: Henderson Cass, Lexington, Ky., aged 76 years, a veteran of the civil war, was horsewhipped in public by his wife by the order of Police Judge Riley. The woman had lodged a complaint against her husband, claiming that he was squandering his pension money and was drunk a great deal of the time. He was brought into court and told Judge Riley that he wanted to have a good time. The Chicago Chronicle correspondent says the judge asked the abused wife why she did not whip him, and she said she could do it all right if he said she might. Judge Riley replied:

He told Patrol Driver Wallace to bring him a buggy whip, and, arming the woman with the whip, he told her to march her husband into the station-house lobby and lay it on him until she got tired. The woman did so.

The husband at first took the matter as a joke and laughed, but soon he began to realize, after the woman began laying on lick after lick with full force that she was in earnest and he begged her to stop. He promised to be sober and a good husband and she stopped.