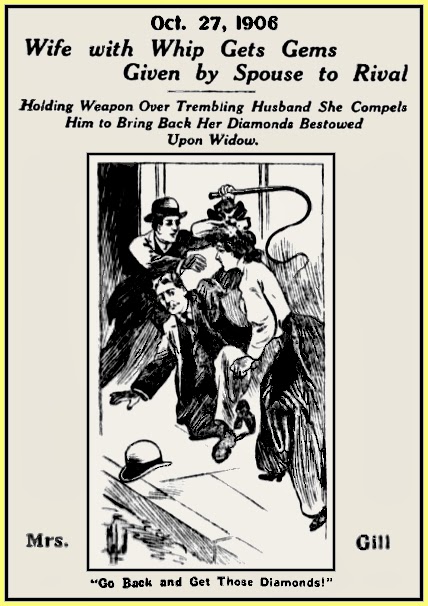 FULL TEXT: Los Angeles. – Holding a horsewhip over her cowering husband, Mrs. George A. Gill, wife of a rich Pasadena man, compelled her spouse to go back into the cottage of Mrs. Maurine Walker, a widow of Redondo, which he had just left, and get diamonds worth several hundred dollars and return them to her.

Armed with the whip and accompanied by a detective, Mrs. Gill patrolled the street in front of the Walker cottage all night awaiting the appearance of her husband, whom she knew to be inside. At seven o’clock Mrs. Gill entered the cottage and attempted to use the whip on her husband, but the officer restrained her in a few moments the three emerged from the cottage – Gill appearing in a disheveled state – and a further scene was enacted on the porch.

“Go back into that house and get those diamonds – my diamond pin that you gave to that woman,” cried her infuriated woman.

Gill obediently entered the cottage and returned, bearing the pieces of jewelry, which he handed over to his wife. Then Mrs. Gill led her husband, pale and trembling, to the car and started for home.

Principals in the affair were reluctant to discuss the case. Mr. Gill even declined he had not been in Redondo, and that he did not know Mrs. Walker.

"I have nothing whatever to say on the subject," she said.

The affair has created a tremendous sensation in society in Pasadena, and Los Angeles. Mrs. Walker is a widow of a former Los Angeles banker. She owns a beautiful summer home at the seashore city. Mrs. Walker and Gill became acquainted when the former lived in Pasadena a few years ago.

[“Wife with Whip Gets Gems Given by Spouse to Rival By Holding Weapon Over Trembling Husband - She Compels Him to Bring Back Her Diamonds Bestowed m Upon Widow.” The Garland Globe (Ut.), Oct. 27, 1906, p. 6]