Equal Punishment for Violent Wives Proposed in Delaware in 1901 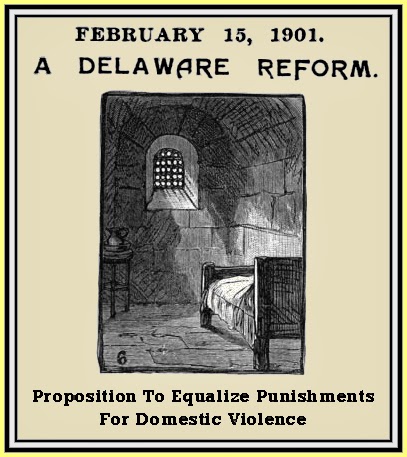 FULL TEXT: While Mrs. Carrie Nation, exulting in the security of her womanhood, is sweeping the East with a besom and raising something like a riot in every town in the State, the legislators of Delaware have under consideration a bill which, if enacted, will startle her worse than the sight of a gin mill in open working order next door to her own house. The Delaware measure is nothing more nor less than a proposition to equalize punishments in that State and to treat vicious wives in the same way that vicious husbands are treated.

According to the reports that come to us the bill provides that “if any person, being the wife of any man, shall, by physical violence, abuse” maltreat or beat her husband, she shall be deemed guilty of a misdemeanor, and upon conviction thereof shall be punished by being whipped at the whipping post with not less than five and not more than, thirty lashes by the Sheriff, or by her husband, at his election.”

To the people of California such a bill will appear nothing more than a legislative josh; but they are treating it seriously in the East. The New York Times notes: “There is a subtle touch of grim humor in the phraseology of the bill, which makes it optional with the wronged husband whether he or the Sheriff shall administer the disciplinary castigation to the virago under correction. There is reason to fear that the Sheriff, having no personal interest in the matter, would discharge his duty in a more or less perfunctory manner; whereas the husband of the person being the wife of any man, who has rendered himself amenable to the penalty of the husband-beating misdemeanor would certainly apply the scourge with no sparing hand, if moved to apply it at all.”

There are reasons for fearing that husband-beating is a too frequent practice; in that part of the country, and that few husbands are safe when their wives are infuriated. There is a tradition that even John L. Sullivan, in the height of his career, once complained in a Boston court that his wife was in the habit of beating him unmercifully whenever he went home too drunk to put up a fight and defend himself. The Delaware bill may therefore be in the interest of wholesome household reform, but all the same the husband who sends his wife to the whipping post will have a just claim upon the sympathy of the world as soon as the dame gets home again.