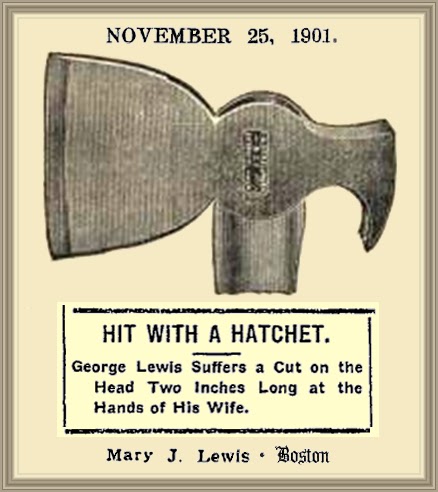 FULL TEXT: George Lewis, who is colored, and a big, strapping fellow, and his wife, Mary J. Lewis, who is also colored and 22 years of age, had a spat at their home, 8 Bradford st, late Saturday night which ended with Mary’s attempt to chop her husband’s head off with a hatchet.

Mrs. Lewis is in the city prison awaiting arraignment on a charge of having assaulted her husband with the hatchet, and Mr. Lewis is in a cell at station 5, where he was locked up shortly after his wife was arrested, and he is held as a witness.

According to the police version of the row Mrs. Lewis thought pretty well of a colored man other than her husband, and so she attempted to put George out of the way. The police say that after Lewis and his wife had indulged in a somewhat lengthy quarrel, George sat down in a chair to think things over, while his wife left the room, declaring she would have no more to do with him. Presently Mrs. Lewis returned, but Mr. Lewis was on his dignity and would not deign to turn his head, so it was easy for her to creep up close to him and bring the blade of a new hatchet down squarely on top of his bare head.

The hatchet cut a two-inch gash in Lewis’ scalp, but it didn’t penetrate his skull. He grabbed his wife before she could hit him again in a more vulnerable spot, and some of the neighbors called in a policeman, who took Mrs, Lewis to the station house and sent George to the City hospital to have his scalp sewed up.

Lewis was taken to the station house, too, after the surgeons got through with him, and he accused his wife his wife of having tried to kill him. The police say she admitted that he was approximately correct in his statement, and to have added that she was sorry she didn’t succeed in her attempt. She said, also, that she bought the hatchet for the special purpose of putting her husband out of the way. It came out, the police say, that Mrs. Lewis has a pretty kindly regard for another colored male person, and when this was suggested to her she remarked:

Mrs. Lewis is said to be a very impulsive person into whose young life have been crowded a number of experiences. Four years ago she got into a fight with another woman, and the other woman threw a lighted lamp struck Mrs. Lewis it broke and set her clothes afire. Patrolman Michael McDonough of division 3 was the man of the hour at that time, for he tore off his uniform coat and wrapped it about Mary, with the result that her life was saved and the patrolman was commended for his gallantry and prompt action.

Email ThisBlogThis!Share to TwitterShare to FacebookShare to Pinterest
Labels: Domestic Violence: Women, Give 'em the Axe