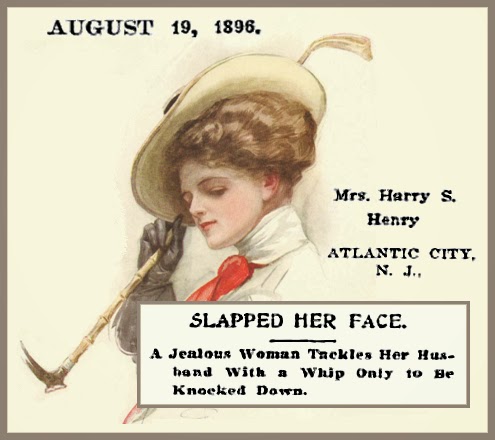 FULL TEXT: Atlantic City, N. J., Aug. 18 – Mrs. Harry S. Henry caused a great sensation early last evening by horsewhipping her husband in the presence of an immense crowd on Kentucky avenue neat the beach. Henry is a woolen goods manufacturer and is also the owner of Penn Valley Stud farm at Morrisville Pa., on which he has expended $340,000 which included $60,000 he paid for the stallion Anteo. For some time past Mrs. Henry has bean jealous of her husband’s attentions to a Philadelphia girl. Mrs. Henry yesterday saw her husband, this girl her sister and a well-known society man of a ‘bus. Mrs. Henry hailed another ‘bus and started in pursuit. The first ‘bus stopped at the Berkeley. By the time Mrs. Henry had come up the two girls had alighted and passed into the hotel. The frantic woman grasped the bridle of the horse and held on until her husband got out of the buggy. A few words passed between them and then Mrs. Henry drew a whip which she ha concealed about her dress and lashed it about her husband’s head and shoulders several times. Henry resented the attack, by striking his to face and knocking her down. He was immediately arrested and taken to police headquarters where he was given a hearing but Mrs. Henry refused to prosecute him.

[The word of “bus” has an apostrophe in this period. The word is an abbreviation of “Omnibus, and the apostrophe has since been dropped in common usage.]