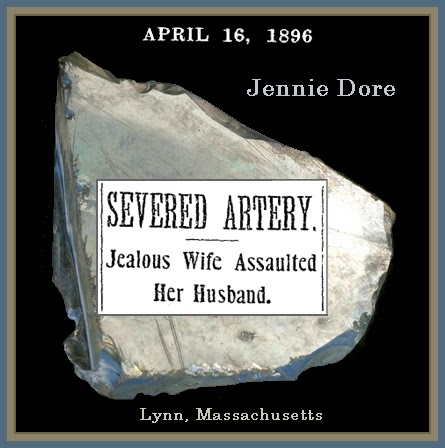 FULL TEXT: Lynn [Massachusetts], April 15  – A sensational assault by which a jealous wife nearly murdered her husband took place in Lynn at a very early hour Wednesday morning. Nothing but skilful surgical action saved the life of the injured man, nor is he at present wholly out of danger.

The victim was Ira P. Dore, a shoe trimmer, employed at Luddy & Currier’s on Willow st. the assailant was his wife, Jennie Dore, with whom he has not lived for a number of months.

A sharp fragment of plate glass, two or three inches square, picked up from the street in a moment of passion probably, was the weapon with which the assault was committed.

Dore received a blow on the right temple. The sharp instrument penetrated the flesh to the bone, severing a large artery. Dr. Little, who attended Dore at his boarding place, 342 Washington st, was not called for about half an hour after the assault, and when he reached the house the patient was nearly dead from loss of blood.

By quick work the physician took up the severed artery and stanched the flow, but he is authority for the statement that had he been 20 minutes later it would have been too late.

Mrs. Dore is at large, but is known to be under police surveillance, although the police refuse to give any information concerning the matter or to admit that it had been reported to them.

The facts of the case as learned, however, are these:

Dore and his wife, both of whom are under 30, have not lived together for a number of months. He alleges that she kept company that was too fast to suit him, and she on the other hand is intensely jealous.

A young woman named Roberts, of whom those who knew her speak highly, takes her meals at the Downs house, but does not room there. Mrs. Dore has been intensely jealous of this young woman, and has on a number of occasions, it is said, threatened to make things lively for her husband if she ever caught them together.

Tuesday night the annual ball of the Lynn letter carriers association was held, and Dore and Miss Roberts attended, although landlord Downs asserts that they did not go together. Mrs. Dore was there also, and while her husband was sitting in the gallery, watching the dancers she approached and accosted him, but he refused to have anything to say to her. miss Roberts and a lady friend who was with her became alarmed and advised Dore to go home, as they thought his wife meant mischief.

Soon after 3 o’clock he started for his boarding house, but, according to the story he tells, he was only a short distance from there when met by his wife and two companions. Dore refused to have anything to say to them.

The trio then left him, but Mrs. Dore followed a little later and caught up with him before he reached the door. Some conversation ensued, and Mr. Downs declares that two of his roomers in the house heard the woman tell her husband that she was going away the following Saturday, but before she went somebody would be a corpse.

A moment later she struck him with something she picked from the street and then left.

He entered the house and aroused Downs and his wife, who, after trying vainly to stop the flow of blood, became alarmed and sent for Dr. Little.

Although Marshall Wells refuses to say anything about the matter Mr. Downs says that the marshal was summoned this morning and took Dore’s statement.

[“Severed Artery. – Jealous Wife Assaulted Her Husband, - Lynn Has on Hand Another Sensational Case. – Injured Man is Not Yet Out of Danger. – Woman Supposed to Have Used Glass. – Is Still at Large, But Under Eye of Police.” The Boston Daily Globe (Ma.), Apr. 16, 1896, p. 7]