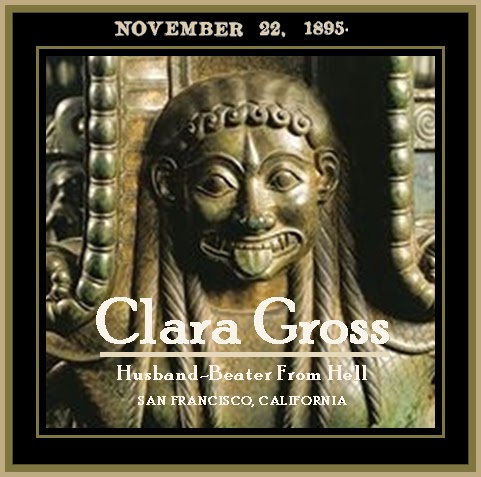 EXCERPT: Scarcely less scathing in the arraignment by Otto Gross of his wife, Clara. Gross is a tailor at 1213 Polk street, and married the defendant in November, 1888. His sufferings have been both mental and physical, and are pictured as recruited from a long -continued course of abuse. Hostilities first commenced one day in July, 1891, when Mrs. Gross is said to have assaulted her husband with a heavy piece of crockery. His head was split open, and hardly had the wound healed before he was bombarded with a lot of dinner plates. He survived this attack, and recovered from his injuries on time to have the head split open for the third time by a blow from a heavy chair. The chair was broken, and Gross feels that it was only providence that saved his much-battered skull from the same fate.

The next act of violence took place in July, 1894, while the couple were living at 2517 California street. On this occasion Mrs. Gross is pictured as having gouged her husband’s face with her finger nails. After this incident there was a lull in hostilities until the 6th of the present month, when Mrs. Gross is said to have turned on the gas in her husband’s room with the view of causing his death. A second attempt of the same kind is said to have been compelled to sleep behind locked doors in order, as he says, to protect his life. His wife made her last violent outbreak a few days ago, when she ran after him with a butcher-knife and threatened to kill him then and there.

Gross ask for a divorce, and that by the decree he be awarded the custody of his two minor children.

(The original article also contains a long account of a similar case plus brief notes on other divorce cases.)