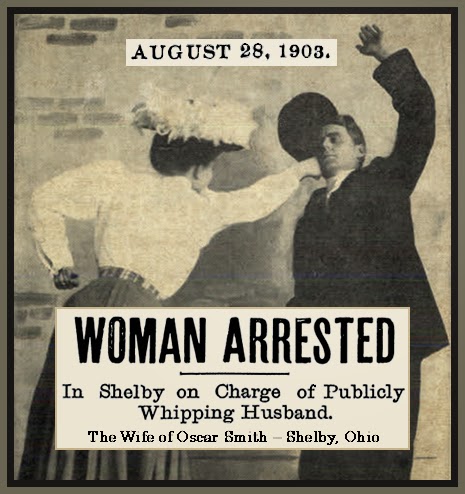 FULL TEXT: The wife of Oscar Smith gave her husband a public whipping on the streets of Shelby, Wednesday night. Today she was arrested and her trial set for 4 o’clock this evening. The streets were thronged at the time of the whipping because of the band concert that was being given. When the fight started some one raised the cry “a fight” and the crowd began to push toward the scene of action. They fell back, however, when they noticed a woman trimming up her husband in the latest approved style. The husband and wife happened to meet on the street and held a short conversation in which the wife seemed to have the most to say. The answer of the husband did not suit the occasion evidently and she gave him a stiff jab in the neck straight from the shoulder as one reads about in championship battles. He did not attempt to strike his wife but immediately made an effort to recover his hat which was knocked off in the first round. His only desire seemed to get away from the punishment and he succeeded pretty well but not until he had received  several upper cuts.