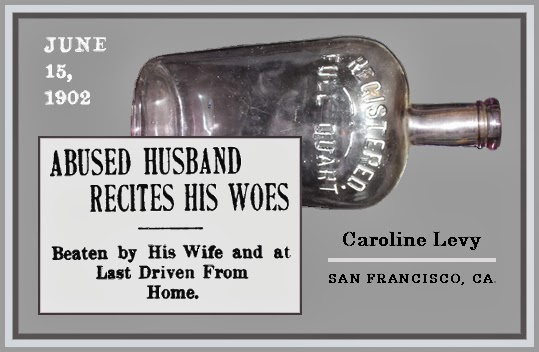 FULL TEXT:  [San Francisco, Ca.] – “There is only one man I love, and I am sorry I didn’t marry him, said Caroline E. Levy to her husband, Seamon Levy, according to the complaint in his divorce suit filed yesterday. “I despise and hate you and am sorry that I married you,” she added. Their marriage took place on August 21, 1900, and he says that almost continuously since then she has been cruel to him. He alleges that she refused to prepare his meals unless he would agree to support her idle and able-bodied brother; that she tore her marriage certificate into shreds, threatened to sell her wedding ring in order to show her contempt for him, used abusive language to him in her fits of rage, and threw a hatchet, pieces of wood and other things at him. On May 20, 1902, she hit him on the neck with a quart bottle, and then tried to cut him with a razor. His relatives prevented her from doing so, whereupon she threatened to cut his throat with the shaving implement during his sleep. She ordered him out of the house, saying, “If you go to bed in this place to-night you will never get out alive.” Levy states that he was convinced of her sincerity, and left home for safety. Subsequently, not being able to repress the emotion of love in his bosom, he pleaded with her again, but she responded, “I have no use for you, and never did have.” The couple have a son 8 months old.

(Note: The final two paragraphs of this article discuss other cases that were heard in the court on the dame day, and thus are omitted.)