Anna Poppert Thought She Had a Right to Beat Her Husband: Chicago, 1908 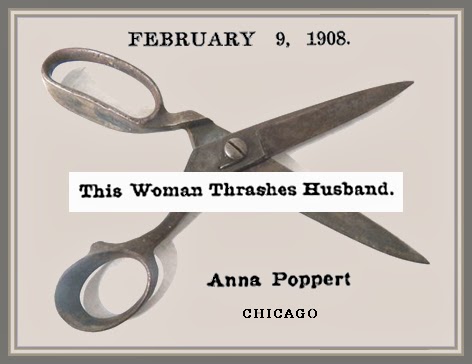 FULL TEXT: [Chicago] – Anna Poppert, according to witnesses who testified before Judge Walker during the day, believed she had a right to beat and kick her husband. John H. Poppert, whenever it pleased her so. The husband held different views and set them forth in the divorce bill on which Judge Walker gave a hearing.

In April, 1906, Poppert asserted, the defendant struck him on the forehead with clothes brush and threw a pair of scissors at him, striking him on the arm. At another time, he said, she kicked him in the stomach, and, when asked concerning this by Andrew Wolski, 353 Cornell street, a friend, she said: “I have a right to kick him or beat him if I like.”

[Note: The original has a typo, spelling the judge’s name two different ways, “Waller” and “Walker.” The latter has been selected as probably correct.]