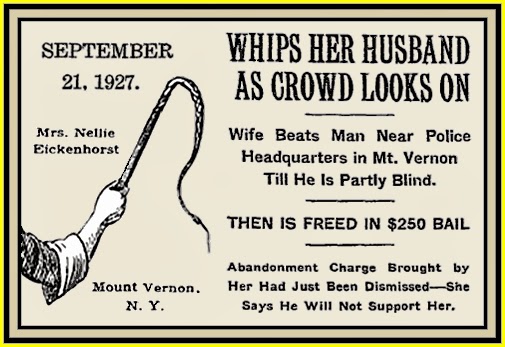 FULL TEXT (Article 1 of 2): White Plains, N. Y., Sept. 20. – Mrs. Nellie Eickenhorst, 42 years old, of 145 West Lincoln Avenue, Mount Vernon, took the law into her own hands this morning, and horsewhipped her husband, frank, 40 years old, in an effort, she said, to make him awaken to a sense of his responsibility toward her. The whipping occurred when she met him in front of Police Headquarters.

A charge of abandonment preferred against Eickenhorst by his wife was dismissed by City Judge Bernstein in Special Sessions Court this morning when Mrs. Eickenhorst admitted that their husband was living at her home. He would not work and support her, she said, and she had been compelled to work as a saleswoman.

Following the dismissal of the charge, Mrs. Eickenhorst went to a hardware store where she purchased a three-foot whip. With this she slashed her husband about the face and body when she met him in Valentine street. Policeman Charles Roehl ran from headquarters and warned the woman to stop. She continued to beat her husband, and finally struck him in the face partly blinding him.

By this time a crowd had gathered, by the sight and by the cries of Eickenhorst, who endeavored to protect himself from his wife’s blows by covering his head with his arms as he lay on the ground before her. Mrs. Eickenhorst was persuaded to stop and surrendered her whip, after which she was arrested on a charge of disorderly conduct. She was released in bonds of $250 for hearing tomorrow morning.

Mrs. Eickenhorst was warned by Judge Bernstein that her activity with a whip must cease.

The whipping followed the dismissal in court yesterday of a charge of abandonment brought by Mrs. Eickenhorst against her husband. she had admitted that he was living with her but asserted she was forced to support herself and that Eickenhorst sat around the house all day. When the case was dismissed she appeared upset and left the court room, going to a nearby store where she a very heavy dog whip.

Meeting her husband she warned him that although he might escape punishment in court he would suffer at her hands and lashed him about the face and body.

Mrs. Eickenhorst appeared penitent this morning in court. Eickenhorst said he was not anxious to press a charge against his wife.