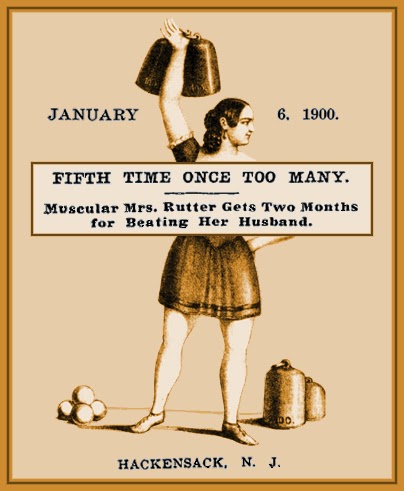 FULL TEXT: Hackensack, N.J., Jan. 5. – Louise Rutter, who was convicted here yesterday of husband beating, was to-day sentenced to serve two months in the county jail as punishment. When she was called to the bar for sentence Judge Zabriskie said:

“Mrs. Rutter, if I am not mistaken, this is the fourth time you have been before me charged with offense.”

“That is wrong; this is the fifth time,” was the cheerful reply.

“We’ll, it’s five times too often,” said the Judge, “and I want to know if you intend to stop having to come before me on this charge.”

“I guess not, so long as occasion demands,” said Mrs. Rutter, complacently.

Judge Zabriskie looked at the woman for fully a minute without speaking. Then he shook his head as if admitting defeat and murmured: “Two months.”

The prisoner was led away not altogether cast down.

Mrs. Rutter is thirty-two years of age, strong, and muscular. Her husband, whom the law is trying to protect, is fifty-five.