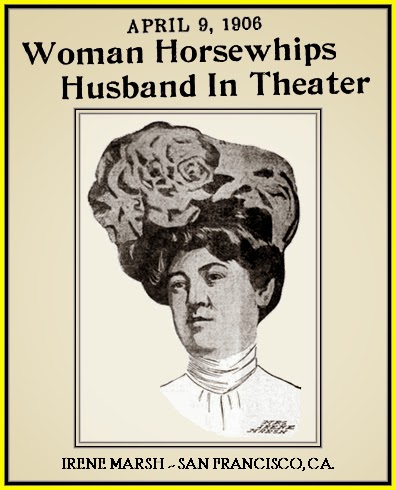 NOTE: The following article describes Mrs. Irene Marsh’s April 1906 attack on her husband, but Mrs. Marsh was a well-document violent woman. On August 13, 1902 she fired four shots at Alice Murray, and on January 29, 1907, again tried to kill her, firing three shots and wounded a male bystander, Hugo Carr. The portrait of Mrs. Marsh  is taken from a 1902 article.

FULL TEXT: San Francisco, Apr. 9 – A feature not down on the program occurred at the Orpheum Theater in this city last night. The performance had hardly started when a woman entered the theater and made her way down the center aisle, carrying a riding whip. Suddenly she produced the dainty lash, and without a word of warning brought it down vigorously on the shoulders and across the face of John W. Marsh. He fled with all the alacrity at his command, and the irate woman turned her attention to the young damsel who occupied the adjoining seat. The whip descended upon the latter and the angered madam followed the man up the aisle. At the door both were requested to step outside which they did. The woman with the whip was Mrs. Alice Murray, upon whom he has lavished his affections.