Henrietta McAvoy, “the best umbrella swinger in the Bronx” - 1921 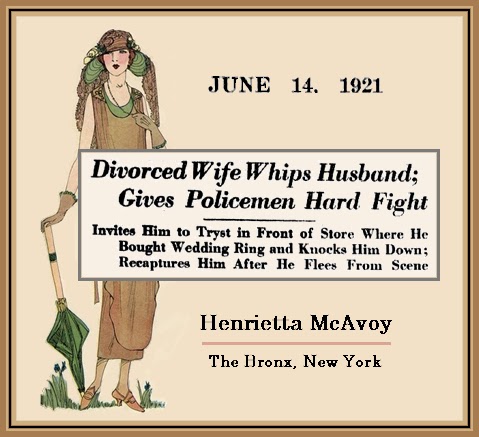 FULL TEXT:  James W. McAvoy is a married man, living at 3178 Park avenue, the Bronx. Five months ago he was separated from his wife, Henrietta, by a civil court. Yesterday evening he was separated from her by three policemen and was assisted to Morrisania police station, where he described himself as an engineer. The police said he looked more like a wreck.

Henrietta is thirty-one years old and the best umbrella swinger in the Bronx. She is now charged with assault. Her husband wanted to make it murder, but by some rare bit of fortune he wasn’t dead.

Whether her alleged attempt to assassinate him was premeditated McAvoy does not know. All he can remember is that when he came home yesterday afternoon he found a letter from Henrietta awaiting him. She said she wanted to meet him at 8 o’clock
at Third Avenue and 149th Street. No mention was made either of weights or weapons. And McAvoy was for the moment deluded into thinking that she merely wanted to look once more upon him.

Accordingly, he dressed himself in his Sunday suit, and went to keep the tryst. He found it to be in front of the jewelry store where eight years ago, he had purchased the engagement ring for her. It was a beautiful thought.

Presently Henrietta emerged from a chop suey restaurant. where she had been taking on sustenance, and asked him for $20. McAvoy informed her he had only $10 and some small change. Henrietta took the $10.

A few words followed and suddenly Henrietta swung her umbrella against McAvoy’s neck, knocking him down. Once down McAvoy continued to stay that way, because every time he tried to rise, Henrietta knocked him down again.

The. noise of battle brought Patrolman George Colby to the scene, Henrietta resented his appearance if for no other reason than because he had not been invited. She paused just long enough to hand the money and the umbrella to a strange woman and to roll up her sleeves. Then she sailed into Patrolman Colby and got over several good body blows and a half dozen kicks to the shins before two more patrolmen arrived.

In the mean time McAvoy had seized the long awaited opportunity to get up and had set off at a wabbly [sic] trot away from Henrietta and everything connected with her. The fact that he reached a distance of a hundred yards from her was due solely to the other fact that Henrietta was occupied with a minor war of her own against the three policemen.

As soon as she could possibly leave them, she did so and overtook her husband. She didn’t hurt him much, because the three cops grabbed her again and because her husband was as badly hurt as he could be without being positively ruined.

At the police station McAvoy charged his wife with disorderly conduct. Then some one handed him a mirror, and he changed it to assault. Mrs. McAvoy refused to give her address, and her husband advised the police not to excite her by insisting upon it. He, for one, would never intrude on her private life, anyway.

[“Divorced Wife Whips Husband; Gives Policemen Hard Fight - Invites Him to Tryst in Front of Store Where He Bought Wedding Ring and Knocks Him Down; Recaptures Him After He Flees From Scene,” New York Tribune (N.Y.), Jun. 14, 1921, p. 7]