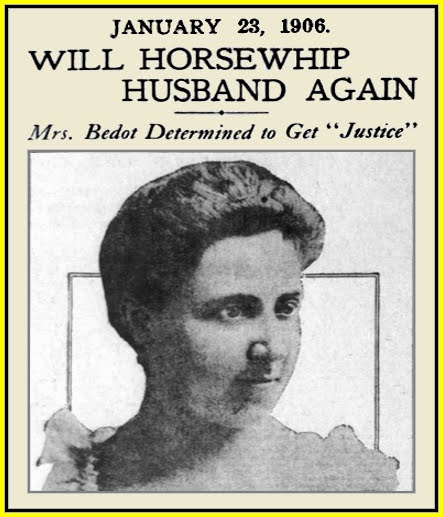 NOTE: Mrs. Emelie Bedot had a vision. She was a strong woman and her feminism was clear and simply stated. She demanded that the government enforce a wife’s complaints against her husband, so that wherever she felt her needs were not being met the government would step in, sieve the disobedient man, tie him to a post, strip of his upper clothing, and slash his back with a horsewhip for all to see. It is a wonder that a husband might consider giving his attention another woman, who would certainly exhibit a character less admirable, less independent, less “strong woman” in nature, less “empowered.” [UHoM]

FULL TEXT: OAKLAND. Jan. 22.—”Of course I horsewhipped my husband and I will do it again whenever I meet him if the law refuses to supply a whipping post to punish men who ill-treat their wives, the women must take the law into their own hands.”

That was the startling manner in which Mrs. Emelie Bedot, her teeth clenched and her dark eyes snapping, admitted this afternoon that she had chastised her erring spouse in the public streets of Oakland. Mrs. Bedot thinks there is no disgrace attached to the publicity of the whipping, she is a wronged wife, she declares, and since the law will not avenge her wrongs she is privileged to seek her own method of punishment.

The whipping of Henri Bedot by his wife was the second instance of its kind in Oakland within twenty-four hours. Saturday night a woman supposed to be Mrs. Mallory horsewhipped a man who said hl« name was Schwartz in front of Fred Ohe’s saloon at Fortieth street and Ban Pablo avenue.

This was followed last night at Twenty-Fourth street and Broadway by the whipping of Bedot by his wife. When seen at the home of a friend on Sycamore street, where she is staying temporarily, Mrs. Bedot to-day said:

I came with my husband from our farm in Glenn County two weeks ago. We quarreled at the farm over a servant girl that I think my husband was paying too much attention to although he declared that I was neglecting his meals. We went to San Francisco and took rooms on Third street, between Mission and Howard. 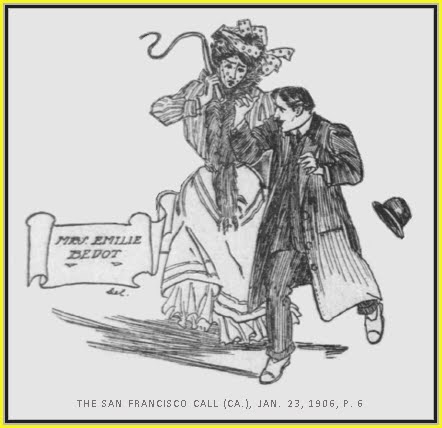 It was our idea in going to San Francisco to sell our property interests and separate. But my husband was reluctant, about coming to a settlement and I learned that he was pending his money on a woman who lived in Oakland. I followed him over here last night and saw him go into a house in Piedmont.

I am not familiar with the streets and don’t know just where it was but I waited for him a couple of blocks away and when he alighted from a car to transfer at Twenty-fourth street and Broadway accented him. When he said it was none of my business what he was doing there I grabbed a whip from an express wagon and gave him a good thrashing.

I’ll repeat the chastisement every time I meet him until he makes a settlement of our property interests and we are legally separated.

Our farm is worth about $15,000 and he has several thousand dollars in a bank at Willows. All I want is justice. I have no fear of arrest, as my husband would not dare to have things I know told in court.

(NOTE: The original text used the spelling “Emelie, while the illustration uses “Emilie.”) 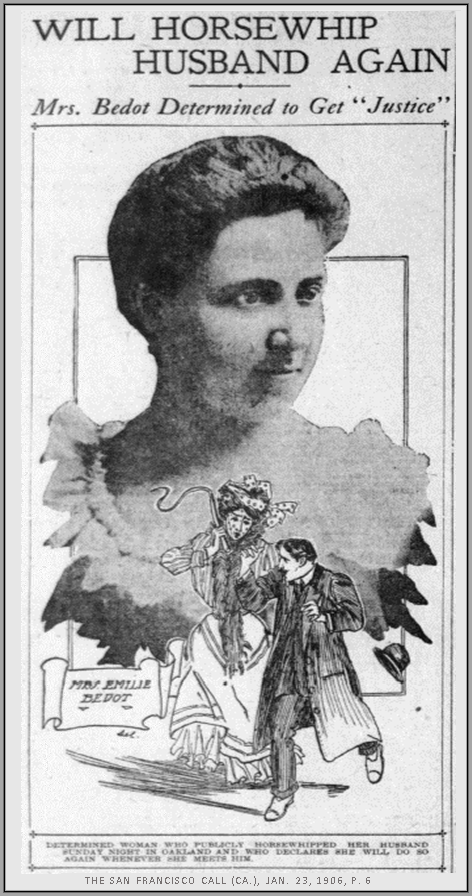