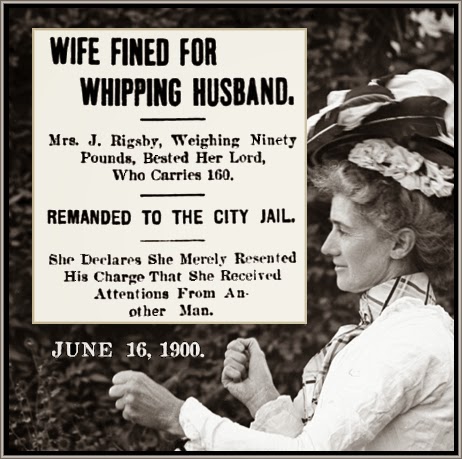 FULL TEXT: [Alton, Missouri] – Mrs. John Rigsby, who weighs ninety pounds, pleaded guilty in the City Court at Alton yesterday of whipping her husband, who weighs 160 pounds. She was fined $25 by Justice R. C. Few of Alton, and, on failing to pay the fine, was sent to the City Jail.

Mr. Rigsby prosecuted his wife, he said, because she “beat him unmercifully several times a day.” The Rigsbys live in a tent on the river bank in that part of Alton known as the “Green.”

A day or two ago, Rigsby asserted, his wife administered a beating to him that was unusually severe, and he decided to appeal to the law for protection. In relating his troubles to the Judge has said that he was black and blue and sore all over from the effects of the beatings administered to him by his spouse. “I am tired of being used as a punching bag for the development of Mrs. Rigsby’s biceps,” he told the Judge.

It was remarked that Rigsby was a pretty big man to fear a beating from alike Mrs. Rigsby.

Rigsby said that he never gave his wife any cause to treat him so. She declares that he came home the other day and accused her of receiving attentions from another man. She resented his charge, she answered, and, to emphasize her indignation, handed him a few mild punches. She succeeded in subduing him to such an extent that he appealed to the law for satisfaction.

The police, it is said, are looking for the supposed other man in the case, but just what charge will be placed against him has not been made known. Neither Mr. nor Mrs. Rigsby, it was stated, would give this man’s name.

[“Wife Fined For Whipping Husband. – Mrs. J. Rigsby, Weighing Ninety Pounds, Bested Her Lord, Who Carries 160. – Remanded To The City Jail. - She Declares She Merely Resented His Charge That She Received Attentions From Another Man.” The St. Louis Republic (Mo.), Jun. 16, 1900. p. 8]