Tuppie Seymour Whipped Her Husband With A Dog Leash - 1937 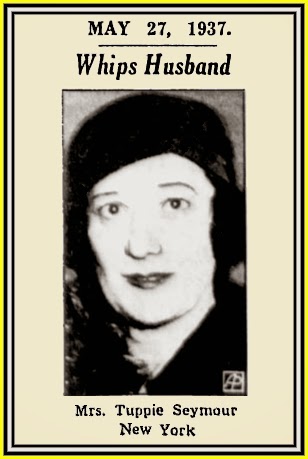 PHOTO CAPTION: Mrs. Tuppie Seymour (above) whipped her husband with a dog leash when she saw a pretty blonde sitting near him in a fashionable New York restaurant. She was booked on a disorderly charge – and her husband posted bail for her. The café manager said a table was upset and expensive dishes broken. This picture was taken at Mrs. Seymour’s court hearing today. Her case was continued.

FULL TEXT: Spring being what it is, for “sentimental reasons” charges of disorderly conduct were withdrawn yesterday against Mrs. Tuppie Seymour, who achieved a certain fame by dog-whipping her husband in a fashionable restaurant.

The charges were withdrawn in Jefferson Market Court, where Mrs. Seymour, 37, of 75 E. 55th Street, was arraigned with her sisters, Mrs. Edith McNab, 55, of 320 E. 57th Street, and Mrs. Robert Adams, 47, of 435 Park Avenue. The elder sisters stood grimly by as Mrs. Seymour flogged her husband William R. Seymour Saturday night after finding him with a blonde in La Rue’s at 45 E. 58th Street.

“The case has been closed for sentimental reasons,” said Sanford H. Cohen, counsel for Peter Ogiletti, manager of the restaurant. “It might have interfered with the relations of husband and wife and caused friction.”