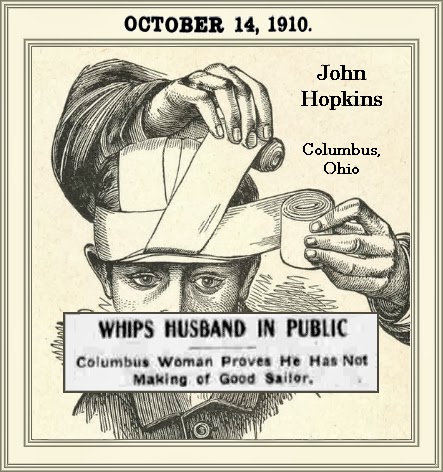 FULL TEXT: Columbia, O., Oct. 14. – When John Hopkins, living on a farm east of Columbus, had passed the physical examination for enlistment in the navy, he called his wife over the phone and told her his action was the outcome of a quarrel they had engaged in.

Then Mrs. Hopkins called the recruiting officer to the phone and requested him not to accept Hopkins’ enlistment until she got there. Thirty minutes later she came like a whirlwind and went after Hopkins. Hopkins yelled for help, but as he is a big man and his wife only weighs about 100 pounds, the officers let them fight it out in five minutes Hopkins looked as if he’d just blown in on a Kansas cyclone, and the woman stood by ready to load him home.

The officers thought Hopkins would not make a very good defender of the nation when a woman had to effectually cleaned him, so they throw the papers in the wastebasket.