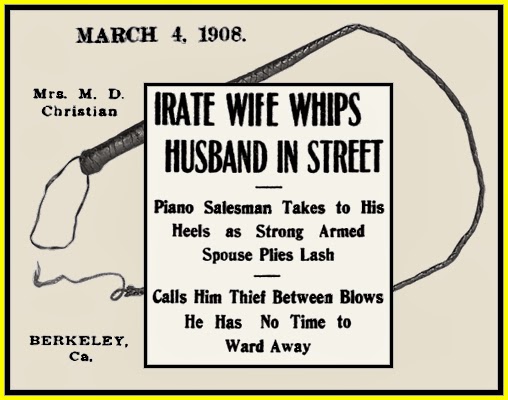 FULL TEXT:  Berkeley, March 3.—”You will steal my money, will you?” shouted Mrs. M. D. Christian, wife of a salesman for the Eilers music company, living at 2142 Sutter street, San Francisco, as she took a horsewhip from the folds of her skirts and showered blows on the head and shoulders of her husband, who, was standing talking with Otto Putzker, an automobile dealer, in front of the police station at 3 o’clock this afternoon. Christian, putting up his hands to protect his face, ran into Putzker’s store at Shattuck, avenue and Allston way, crying with pain. Bystanders, seized the whip from Mrs. Christian, and she and her husband were placed under arrest.

Christian, who has been a salesman for the Eilers company, recently was transferred to the Berkeley office. He was engaged in conversation with Putsker in front of the town hall at Shattuck avenue and Allston way at 3 o’clock, this afternoon trying to sell him a piano. He mentioned, in passing, that he was in financial difficulties and expected trouble with a woman.

“Without warning Mrs. Christian, who had come toward her husband from behind the two men, was seen by bystanders to take a small blacksnake from the folds of her skirts and belabor the shoulders of her husband.

“You will steal my money, will you?” she shouted at the top of her voice as she vigorously applied the whip on the head, shoulders and back of Christian.

She continued to strike him until Otto Putzker seized the whip and allowed Christian the opportunity to escape to the back of Putaker’s store, which is next to the town hall.

Aroused by the disturbance, Policeman J T. Jones rushed out of the police station and placed the couple under arrest and booked them on charges of disturbing the peace. They were released later on the payment of $10 bail each.

Neither would be interviewed at the police station, although Mrs. Christian volunteered the information that her husband was about to leave her and make her pay a number of bills which he had contracted. She admitted that they had frequently quarreled and that she came to Berkeley for the express purpose of horsewhipping him.

[“Irate Wife Whips Husband In Street - Piano Salesman Takes to His Heels as Strong Armed Spouse Plies Lash - Calls Him Thief Between Blows He Has No Time to Ward Away,” The San Francisco Call (Ca.), Mar. 4, 1908, p. 4]