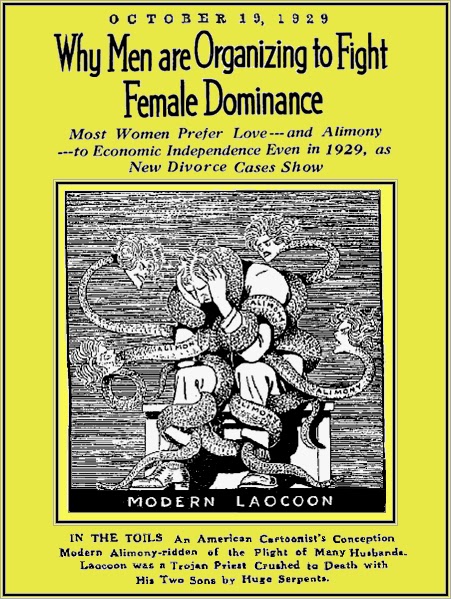 FULL TEXT: No subject perhaps is of more vivid, vital interest to men and women today than alimony. Its ramifications stretch down into the roots of love, marriage, divorce; legal decisions regarding it are as contradictory as they are varied and labyrinthine in logic.

And the attitudes of husbands and wives on alimony are just as different from one another as the textures of their skins, or the clothes they wear.

Ordinarily, a woman who is granted a divorce feels – and the courts generally sustain her contention – that she is entitled to separate maintenance. But there are notable exceptions. For instance, when Carlotta Montgomery – now the third wife of Eugene O’Neill, playwright, and herself an actress of esteem – sued her then-husband, Ralph Barton, wealthy cartoonist, for divorce, she spurned alimony.

On the other side of the ledger we find Mrs. Marguerite Mulready, of San Francisco, asking a divorce from B. J. Mulready on grounds of desertion. She lost the suit and was ordered to pay HIM $750 alimony.

In violent contrast to this suit was that of beautiful Mrs. Evelyn Patterson, wife of the Dayton, O., cash register king, who asked $7,000,000 alimony from her fabulously rich husband.

Sometimes there is a comic side to divorce, as witness the case of Sam Reid, the “alimony martyr,” who spent two years in a California jail rather than pay his ex-wife a cent.

THE World’s League for the Rights of Men [Aequitas Weltbund für Männerrechte] is housed in a palace in Vienna and has 25,000 members. Recently this organization issued an invitation to the downtrodden males of America to attend a convention in Vienna. American men whose wives or ex-wives have left them with enough money to travel to Vienna are still urged to join the league.

The secretary of the league in Vienna showed a newspaper correspondent the membership list. And lo!

There appeared the names of American business men, bankers, and even college professors!

“America is still under woman’s rule,” said the official spokesman of the league, “and it might, therefore, be embarrassing to our new members to have their names published. In America the women mistrust us because they think our object is to reestablish the tyranny of men. In reality, all that we ask for men is a fair deal.” 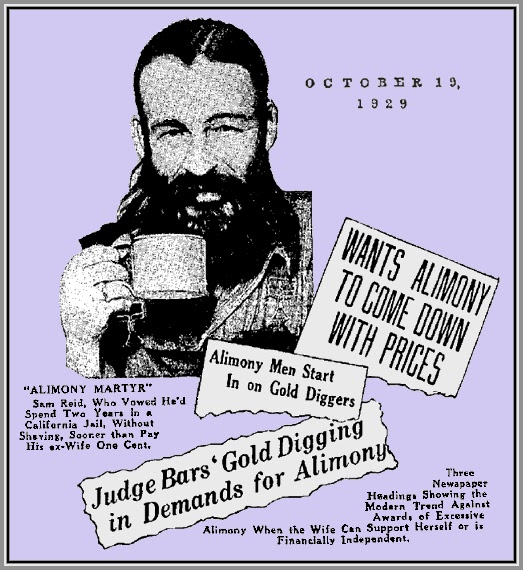 He then went on to explain what the fair deal called for.

FIRST—That divorced women capable of earning their own living or earning a private income should not be eligible for alimony.

SECOND—That no alimony should be payable unless the marriage lasted at least three years.

THIRD—That divorced women should be denied the use of their former husbands’ name.

Though the organization of a league for men’s rights may appear a trifle unnecessary to the average American, it is a curious fact that modern codes of law actually leaned backward in several particulars in their attempt to protect their property rights of a married woman and especially of married mothers. A woman who has separated from her husband can legally compel him to support her. Yet a man separated from his wife usually cannot obtain financial assistance by the aid of the law in most States regardless of how wealthy his wife may be and how little money he himself may possess.

The same is true of divorce and alimony. If a woman obtains a divorce she can usually secure alimony no matter what the real cause of her legal separation from her husband may have been. But if a man divorces his wife for just cause, the man cannot secure any share of the property which he has already given his wife nor can he compel her to pay him alimony no matter how wealthy she may be. What is sauce for the goose, in short, is not sauce for the gander.

Psychologically speaking, how far should a woman be allowed to go in collecting money on marriage when there are no children? The new league for men’s rights maintains that no alimony should be permitted if women are capable of earning their own living or if they possess private incomes. But after all, this is still a man’s world. A deserted wife may be physically healthy. She may even possess previous training and experience as a stenographer, secretary or nurse. But how much do these female occupations pay in comparison to the earning capacity of the average man?

From a psychological viewpoint, equalization of the present rights as between men and women should take the form of giving women an equal break in the economic world. After that, it will be time enough to talk about denying a divorced wife alimony whenever she is able to support herself.

The whole question of property should be excluded from any psychologically sound marriage relationship. And the only way it can be excluded is for women to earn their own living and so be in a position to love whom they please. Then a wife with her own separate income can refuse to love her husband the moment he stops loving her.

It is obviously a fact that many men cease to be captivated by their wives soon after marriage – and when a man does not choose to love his wife and docs choose to love another woman he is free to act according to his choice because he is economically independent.

It is precisely from this fact that the double standard of morality has given up. A wife who lacks the power to support herself and who accepts support from her husband becomes more or less his property, no matter whether she thinks so or not. No man responds emotionally to a piece of property in the same way that he responds to a captivating woman who holds him by love attraction only.

But, you may protest; how about a man’s continued attraction to a gold-digging “vamp,” who makes him pay and pay again for the pleasure of her society? The answer is she MAKES him pay. She can hold any man at arm’s length and love him when and if she chooses. That gives her the whip band and enables her to captivate the man and make herself desirable to him. 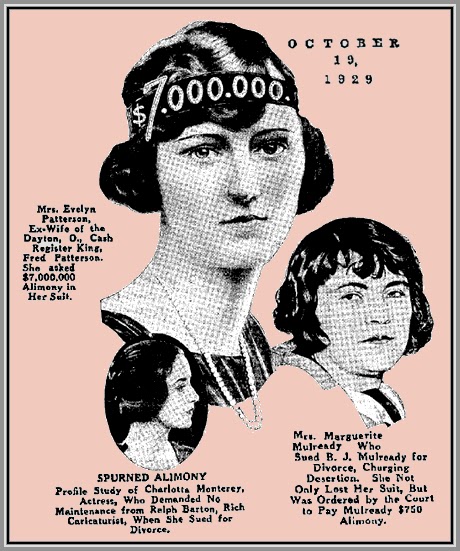 Respectable women seem never to have realized until the dawn of the present century the fundamental fact that they must gain the appetitive power to support themselves and their children if necessary, in order to hold the love of their husbands. To a man anything that is unattainable is worth paying a high price for. And the price which an otherwise unattainable woman should demand for herself is love and not money.

The fundamental trouble with the whole institution of marriage as it existed during the past few centuries that the man owned the woman and not the woman the man.

Woman’s ownership is love captivation, because that is what she enjoys, and that raises love to its highest pinnacle. But to exercise this love ownership women must keep their love a free gift by earning their own living.

The idea that no alimony should be payable unless the marriage lasts at least three years is obviously the male notion of pensioning off a faithful employe. If a woman faithfully serves her lord and master during the three-year period, when her sex attractiveness is at his height, the male sense of appetitive justice is willing to concede that she should be paid for the services she has rendered.

But, after all, we could not expect the average wife-employer to pay alimony cheerfully and happily even after three years of faithful service. Paying money to a woman who is now of no use to him must always seem to a man like paying taxes on foreclosed land. While the property is returning a good income to its owner, or even while the land holds some promise of future return, the average male will pay taxes willingly enough. But when all hope of eventual value has disappeared a man feels no emotional willingness to go on paying for it.

And so it must ever be with alimony in cases where there are no children.

The honest, loving, and courageous women of the present century are facing the problem squarely at last. They are undertaking the painful and laborious task of earning independent livings in a man’s world. Eventually this will put marriage on a new basis, a true foundation. 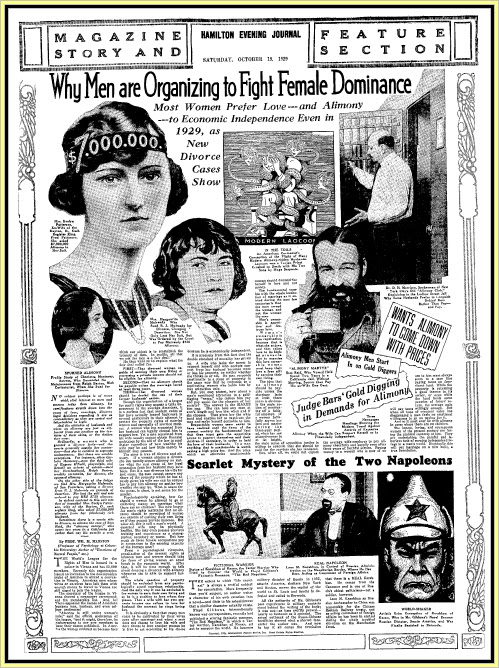 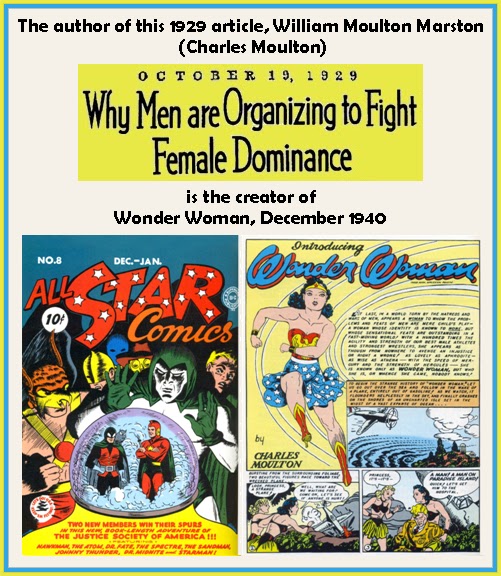