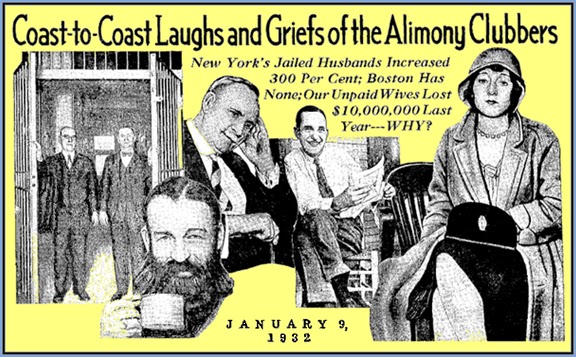 With close to a million of them are getting in the United States alone.

“A perquisite of femininity after matrimony” – to hear the gals tell it.

“Larcenous sleight-of-hand” – to tell hear the boys tell it.

And so it goes. You can sing; it as a round song if you like, after the fashion of “Three Blind Mice,” or “The Farmer in the Dale” as follows:

The husband gets the gate. The lawyer gets his fees. The wife gets her alimony – or the husband goes to jail.

Until the market crash of late 1929, things went quite merrily. Oftentimes husbands deserved no better fate than to be cast aside. Oftentimes it was the wife who deserved that fate, but it was friend husband who chivalrously shouldered the blame. There was plenty of money in circulation. Who cared? 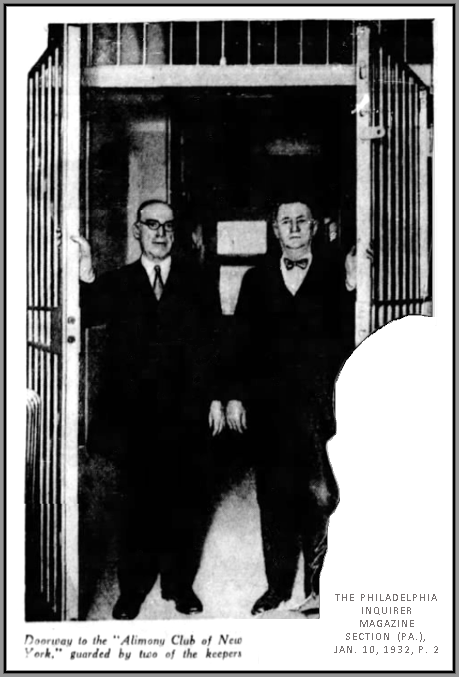 ~ Things Were Different Years Ago ~

Lawyers arranged for quick freedom and husbands cheerfully paid. The jails which provided for alimony prisoners were never crowded. The old Ludlow Street Jail down in the pushcart district of New York’s East Side accommodated no more than a dozen recalcitrant husbands on an average.

Regardless of the equities of the case, husbands reasoned that as long as the alimony levy did not leave them short of pocket money it was cheaper and more pleasant to pay the little woman – bless her! 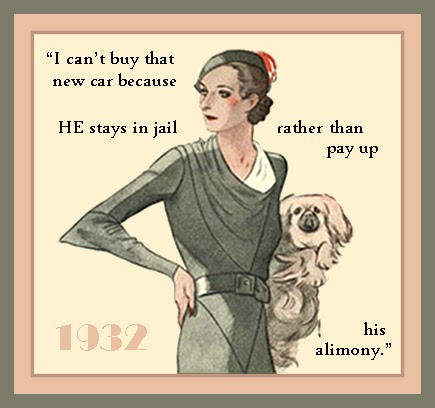 Now, a couple of winters later, the world of the matrimonial “ex’s” appears in a different light. In the foreground we see the old alimony jails (and some newer and bigger ones, too) crowded to capacity. In the same foreground we see notable cases of hardship among ex-wives.

“I can’t buy that new car,” one recently related, “because HE stays in jail rather than pay up his alimony.”

In the background, in a tightly circumscribed world all their own, are the national alimony clubbers. Their number has increased more than three hundred per cent in the past two years. 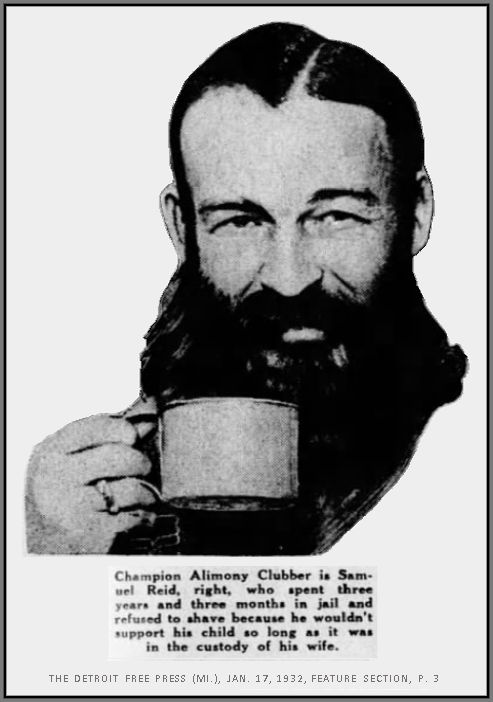 There are fifty-one regular inmates at this writing in a single county jail in New York. Some have been there more than a year. A great many have been there at least six months. With no prospect of steady employment before Spring or Summer, most of them are making the most of the situation and getting fat on the county fare.

Parallel situations are found in Chicago, Los Angeles, Seattle and other large centers of population.

Inside the alimony jails are two separate pictures, one of hilarity and mirth; one of grief and resentment.

Few of them are forced to live in cells. The great majority have private rooms, well-appointed and clean, occasionally with bath. They are furnished with cards, checker boards and checkers, and equipment for playing whatever other game appeals to them. They wear what they please and do practically what they please within the walls of their “clubhouse.”

In New York, the alimony clubbers are privileged to receive visitors on Mondays, Wednesdays and Fridays, each visitor being allowed a half-hour. For these social periods the county provides a large, sunny reception room. 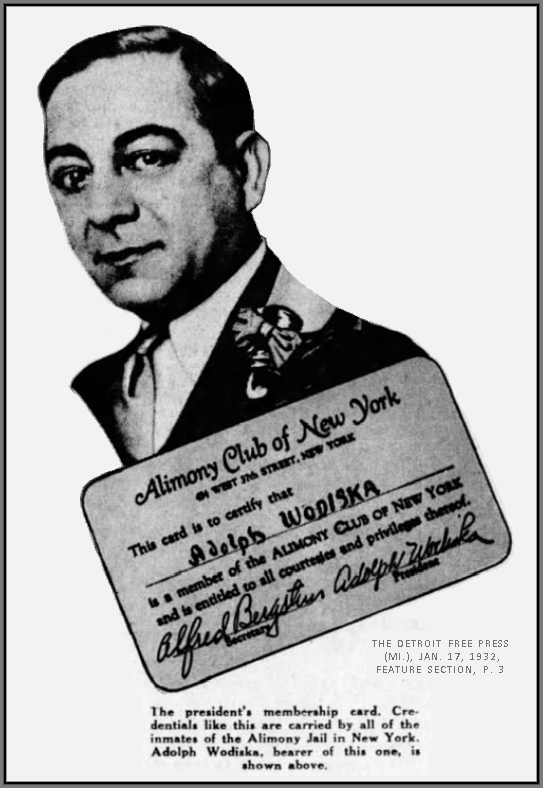 “Who visits the boys?” The question was asked of Under-Sheriff Peter J. Curran of New York.

“None but the little women who put the boys in there,” he answered with a smile. “Anyone who wants to know what funny critters women really are ought to hang around the reception room of the jail on visiting day. It’s too deep for me.”

Grand Master of the New York Chapter or, by his correct title, “President the New York County Alimony Club” – is Adolph Wodiska. He is by trade a diamond merchant. His chief interest at the present time is a campaign of revolt among the alimony brotherhood against present alimony laws.

“There’s one thing all the boys know about when they’ve been in here a few weeks,” Wodiska said, “and that’s the law. Boy, what a bunch of lawyers there’d be in the world if everyone had to do a turn in the clubhouse.”

“They know that under the law when a man has been put in here neither the mayor nor the governor nor the President himself can spring him. Under certain circumstances the governor can release a convicted murderer; he can’t do anything for a delinquent payer of alimony. Neither can the judge who signs the order. It’s not contempt of court, but just plain contempt of wife! And maybe most of the little women don’t know it, but oh, what contempt!”

“Sure we have a good time here. But it isn’t fair, that’s all. At the end of six months you owe just that much more than you owed when you went in. Lots of wives come around and try to coax the boys to kick in on a different arrangement. Some of the boys are willing. Moat of us, though, would rather stay in than kick in.”

“The law for jailing debtors was repeated a couple of centuries ago. That is, it was supposed to be. However, perhaps as the lawyers claim, this is a rabbit out of a different hat. Just a case of the state running a collection agency for friend wife!”

In alimony jails all over the United States, sentiments of club members are about the same.

Divorced husbands who are called upon to pay weekly sums of $300 a month or less in order to keep out of jail find some consolation in the case of Spafford Wyckoff, of Los Angeles, who, although only thirty-nine years old, is paying alimony to four women for the support of four sons, one to each.

But into Los Angeles divorce courts have come signs of the present strained times. In February, 1931, Superior Court Commissioner Larry Doyle decided that no alimony will be granted working wives while their husbands are out of employment.

California’s most famous case is that of “Alimony Sam” Reid, who spent three years and three months in the Glenn County Jail at Widows, during which time he refused to shave, for not paying alimony for the support of his child until the latter was taken from the custody of Mrs. Reid, whose fitness as a guardian he disputed. On October 9, 1928, his buddies of the 363d Infantry paid up the back alimony. Then Sam left jail.

But Reid’s case and that of nearly every other alimony payer in the world appeared slightly trifling in comparison with the staggering verdict of a Paris court in the suit of Mme. Lebaron against M. Francois Coty, her perfume-manufacturing husband. 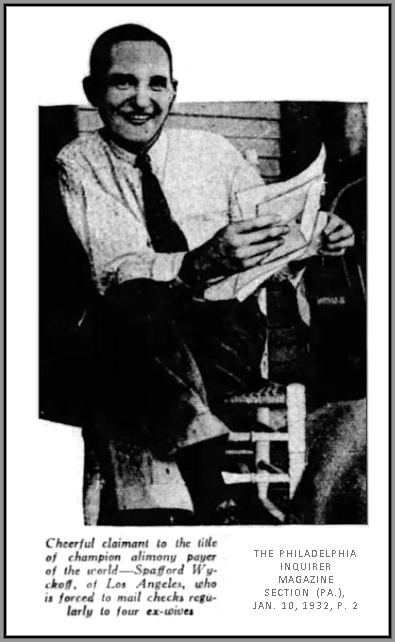 In Chicago, although courts have been loth to jail delinquent alimony payers without clear evidence of unwillingness to pay coupled with an ability to do so—a survey shows that hardly a day has passed which did not see at least one husband sent to the Cook County Alimony Club.

In some circles, Boston distinctly lacks a reputation for tolerance. Thompson Burtis, playwright and author, who was recently released from the alimony jail in New York, undoubtedly has many acquaintances in his profession who would testify to that Boston is rather quick to suppress books it doesn’t like.

But in the question of alimony, Boston has an excellent reputation among the alimony clubbers. Registrar Arthur W. Sullivan of the Probate Court there said when interviewed:

“Not only do the courts of this Commonwealth strongly disapprove of jailing even somewhat stubborn husbands in actual cases of non-support, but our policy is all against alimony as a matter of principle.”

“Our court never allows alimony to a childless wife, feeling that if she is granted a divorce on proper evidence she is getting all she is entitled to.”

“Recently there was a very stubborn case—a man who had been repeatedly warned to keep up his small payments. This individual pleaded inability to pay on grounds of unemployment. However, evidence was produced that shortly before a payment was due he had given a friend a wedding present worth $100. Even after that the court gave him I several chances, but finally the judge felt obliged to incarcerate him for fourteen days for contempt.”

Alimony clubbers have no part in the sedate social life of the club. Elsewhere they are increasingly active.

“Kick, but never kick in,” they resolve. “Be gay, but never pay. With the rest of the world be both tactful and meek – but tell the dear missus to jump in a creek!”

~  “STATE OF THE UNION” – ALIMONIALLY SPEAKING ~

Based on per cent of increase in membership of Alimony Clubs since the stock market crash of 1929, 75% of this amount is in arrears by working of economic law. The demand is greater than the supply. Husbands who can still pay steady ex-matrimonial dividends are at a premium.

The other 25% is owed by jailed “martyrs” – men who have been put in jail for non-payment, and whether they can get the money or not would rather stay in than “kick in.”

LOS ANGELES – From opening of Domestic Relations Court, at 8 A. M. on March 1, 1919, until closing session on November 18, 1931, exactly 100,000 marital cases were handled in this jurisdiction. Many have been handled since. 97% of these were divorce cases, of which 99% involved alimony. Jail for delinquents, with a recent tendency toward tolerance for unemployed men.

CHICAGO – Law similar to that of New York. Policy is to give delinquent husband a “break,” but statistics show that Cook County averages one new alimony prisoner per day.

BOSTON – The Mecca and Valhalla of husbands with domestic troubles. Alimony is never granted a childless wife, even if she wins. Sentences for delinquency in support of children are very rare and when imposed are of only 14 days’ duration. 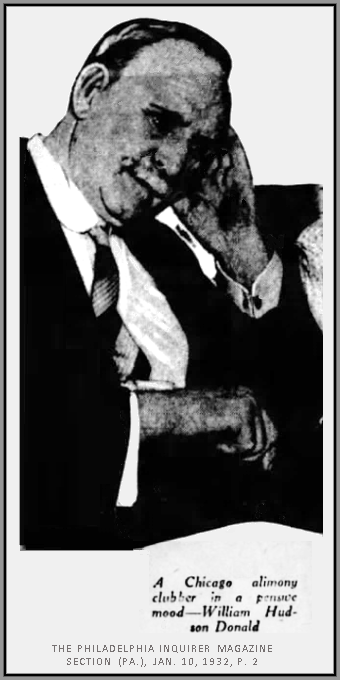 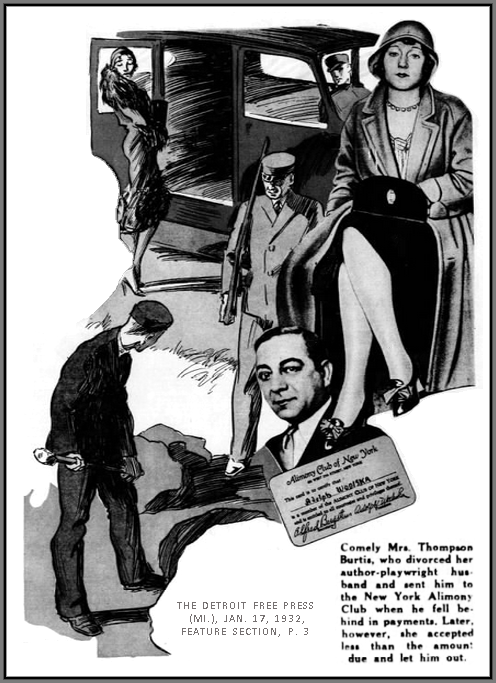 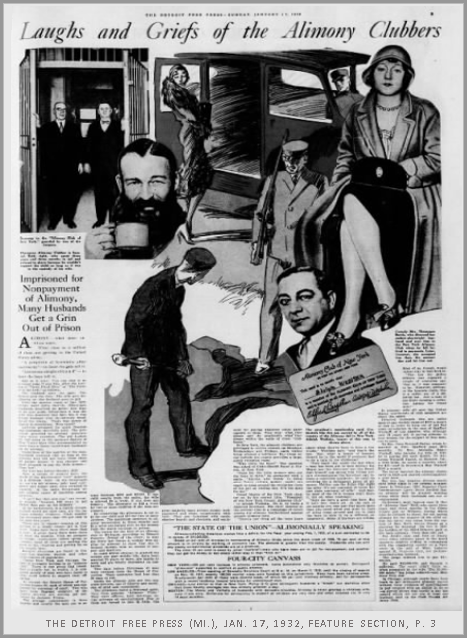 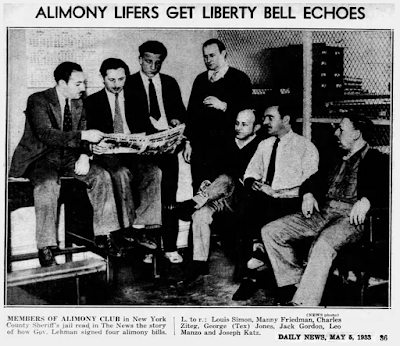