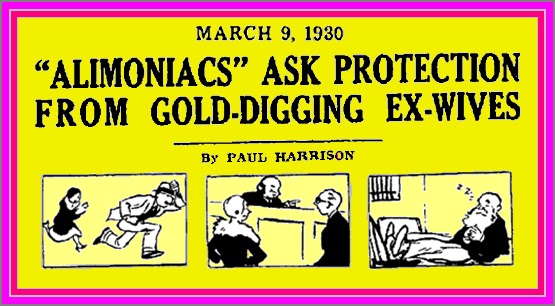 FULL TEXT (Article 1 of 2): New York. Feb. 25.—It was four years ago, which being led to jail, that Dr. A. Dallek decided to do something about the alimony law.

Today Dr. Dallek is head of the legislative branch of the National Sociological League, nee Alimony Payers’ Protective Association. By his efforts three bills which would protect the husband from the gold-digging wife have just been introduced in the New York State Legislature. And the organization born in an alimony jail has grown to unquestioned respectability and national scope.

In New York City alone, there are 2000 members, and the mailing list is ten times as large. It is only natural, one is certain, that Dr. Dallek should feel deeply about this alimony business. It seems that he had been married for 16 years before there was a divorce. He opposed Mrs. Dallek’s request for alimony, but resignedly accepted an order to pay her $75 a week. After all, he had a fairly prosperous practice as a chiropodist in the upper reaches of the Bronx. 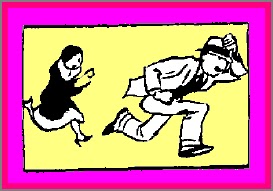 “Well,” he recalled, “I paid for a while and was getting along all right until I became seriously ill. I was away from my office for more than a month, and a month’s absence is very bad for chiropodists.”

“By that time I owed my former wife $350, and was given permission to make up the deficit in three payments. Two of these were made, but when I owed only $115, I had to call her attorney and beg two days of grace so I could make some collections.”

“Within an hour, he had a commitment order signed. I was jerked out of my office and marched to jail.”

In 1929, the various states, and Mexico and France, granted divorces to 203,628 citizens of this country. For every 100 marriages there were 17 absolute divorces and 42 separations. “A Superior Court judge in Chicago, continued Dr. Dallek, calls alimony ‘the greatest curse in America.’”

He says there would not be nearly so many divorces obtained on meaningless grounds if women were not sure they could collect large alimony.

“In a few respects the laws of New York are particularly severe, but they are essentially the same in other states. The usual procedure is something like this:

“The gold-digging divorcee hires the highest-priced lawyer obtainable. Her former husband has to pay the counsel fee, so he probably has to hire a cheap lawyer for himself.” 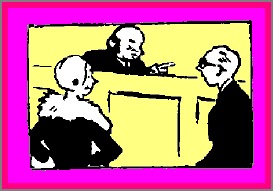 “Usually at the advice of her lawyer, she declares the man’s income to be larger than it really is, and mentions hidden assets which may not exist. The defendant may file a correct answer regarding his income, but only one in 200 ever is granted a referee’s decision.

“Temporary alimony is awarded and the case set for trial. If the man is in arrears on these payments, or has not paid counsel fees, he cannot go to trial. The trial may be delayed for years, and the ex-husband may be sent to jail .in contempt of court.

“So long as he owes a dollar, he has no legal standing and cannot plead his case. Physical disability or loss of his position or business has nothing to do with it.”

For instance, there is the case of one Pojansky. At 74, he is the oldest inmate of the alimony jail. Pojansky hadn’t lived with his wife for 20 years. “For that matter,” he said, “we never did agree.” When they finally separated, the wife was allowed $20 a week alimony. Pojansky paid and paid.

The couple had four grown and self-supporting children, but they offered no aid. Pojansky got old and lost his job. He was called to court. The justice made an unusual decision: two of the children were ordered to support the father; the other two were to pay his alimony to their mother. 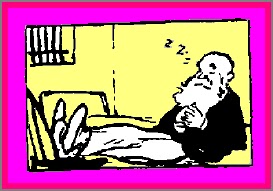 But another court overruled this decision. Pojansky was thrown into jail. He has been there four months now.

Said Mr. Dallek: “All we want – and we’re going to do it this time – is to amend the alimony and divorce laws to the point where both parties involved will be mutually benefitted.  Three bills have been introduced in the State Legislature. They are: demanding proof of a wife’s testimony concerning her husband’s income; affording a husband about to be sent to jail for arrears in alimony a hearing and proper redress if entitled to it; removing the jail sentence as punishment for being in arrears unless the default is willful and inexcusable.”

The youngest alimoniac ever confined in jail was 19. He met a gold-digger one week, married her the next, and the third week found him behind bars.

“This sort of treasure hunting has become a profession now,” said Dr. Dallek. “It is possible for a woman receiving alimony in one state to marry and divorce in another state – and receive money from two men at the same time.” 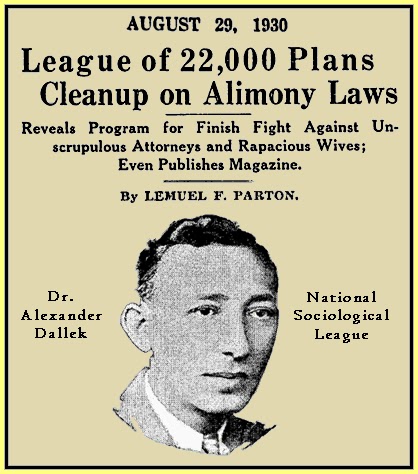 FULL TEXT (Article 2 of 2): New York, Aug. 29. – Speaking of revolutions, here’s the first determined masculine revolt against a woman-made world. When Julius Nicholas Tompers came out of jail Friday, having been imprisoned for nearly a year, it was disclosed that he had the backing of the National Sociological League, and up-and-coming band of alimony payers with 22,000 members, organized nationally “to renovate the alimony laws and break the alliance of unscrupulous lawyers and rapacious women.”

With its headquarters in New York City, the league recently opened offices in Detroit, Los Angeles and other cities, and intends to spreads its works and its gospel over the country. The New York office is staffed and equipped for big business.

The league publishes a magazine called Alimony, has field organizers in several states and is out to rally the nation to an understanding of the evils of “woman-controlled divorce.”

The organization is concentrating in getting bills through legislatures tending to lessen the prevalent hitting and gouging in the matrimonial breaks. While their bill died in committee, at the last session of the New York Legislature, it will be introduced again this year by Assemblyman Harry Samberg. Its main feature is a provision for the granting of only temporary alimony, after an open hearing before a justice of the Supreme court, with a later adjustment of permanent alimony based on the defendant’s ability to pay.

Dr. Alexander Dallek, the league’s secretary, discussed plans of his organization at the league headquarters Friday.

“We’re taking in members as fast as we can take care of them,” he said. “This business of crooked lawyers conspiring with vindictive and hateful women to keep some poor devil in jail is going to stop.

“Take the case of Tompers, just decided,” he continued. “He had been jail for nearly a year, when his wife wanted to have him recommitted, on account of the back alimony which had piled up while he was in jail. It would have been quite possible to have kept him in jail all his life, if it had not been for a decent and sensible judge letting him go.

“How was he to earn money to pay alimony while he was in jail? Here was a man, 56 years old, working as a clerk, and earning $35 a week in alimony, and then they put him in jail when he got behind! There are thousands of cases like this all over the country.” 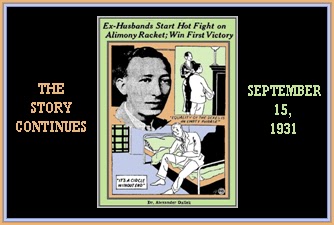