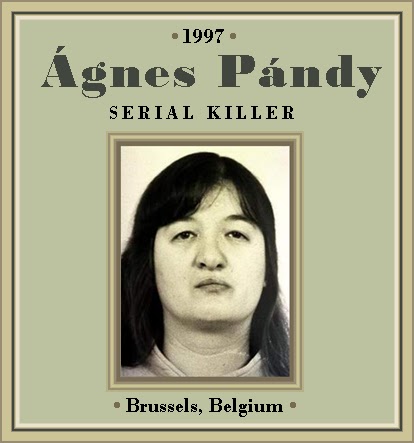 In 1997 Ágnes Pándy turned herself in to the police, confessing the murders of relatives who had begun to disappear in 1986 and disclosed an incestuous relationship with her father, former pastor and suspected serial killer of 13, András Pándy, who was arrested on October 16, 1997.

According to Ágnes’ confession, she was solely responsible for the murder of her mother Ilona (murdered in 1988), and took part in the murder of Dániel, Zoltán and Andrea (13). (She refused to mention Tünde's case (murdered in 1990). Agnes reported victims had been either shot or bludgeoned to death with a sledgehammer, then their bodies were cut up and disposed of either in the environs of their home or by dissolving the pieces in Cleanest, an acidic drain cleaner.

The modus operandi presented by her was, in two cases, murder by a handgun, and head trauma caused by a heavy blunt object. The corpses were then dismembered, partly dissolved in acid in the basement, and partly taken to a local abattoir. [UHoM, based on Wikipedia]