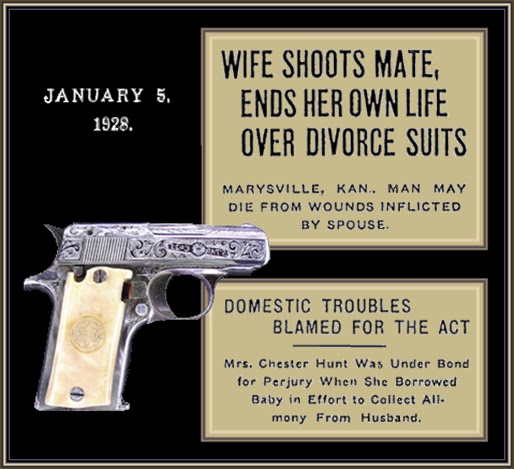 The suicide and attempted murder are the outgrowth of domestic troubles which have been taken to court three times in the last few months.

The Hunts were married. in September 1926 and it is said by relatives, that soon after their marriage domestic troubles developed. Mr. Hunt started suit last fall in the court here, asking that the marriage be annulled. Mrs. Hunt had gone to Atchison to live at the time On Dec. 15 he was told his wife had given birth to a child at a hotel in Atchison and filed suit for a divorce, asking for temporary alimony to support herself and the child.

The alimony hearing was held in Atchison last week. At that time evidence was offered, showing that Mrs. Hunt had not given birth to a child, but had borrowed an infant, in an effort to collect alimony. She was then held for perjury. She was arraigned Wednesday on the perjury charge released on $1,000 bond.

Mrs. Hunt left Atchison Wednesday afternoon for Marysville. When she arrived here she inquired where she could find her husband and was told he was at the home of William Vanamburg, where a group had gathered to go fox hunting. She drove to the farm home of Vanamburg a few miles south of here, went to the house and asked to see her husband who in the meantime had filed another suit for divorce.

When he appeared at the door according to witnesses, she began to curse him, and, pulling a pistol from her pocket, fired directly at him, the bullet striking him in the abdomen. Men, gathered in the home for the fox hunt, ran to the door, just in time to see Mrs. Hunt place the gun to her head and fire, dropping to the floor dead.

Mr. Hunt was rushed to a hospital where, doctors report, he has a slight chance to recover.

Mr. Hunt is the son of Mr. and Mrs. J. O. Hunt of Manhattan. At the time of their marriage he owned considerable property, but of late has lost all until he is practically insolvent.

Mrs. Hunt is the daughter of Mr. J and Mrs. James Walls of Bigelow, Mo.

[“Wife Shoots Mate, Ends Her Own Life Over Divorce Suits - Maryville, Kan., Man May Die From Wounds Inflicted by Spouse—Domestic Troubles Blamed for the Act – Mrs. Chester Hunt Was Under Bond for Perjury When She Borrowed Baby in Effort to Collect Alimony from Husband,” syndicated (UP), St. Joseph News-Press (Mo.), Jan. 5, 1928, p. 8]