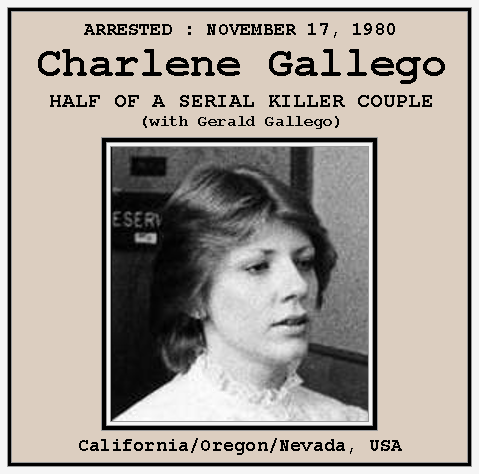 In 1984, Gerald Gallego was tried for murder in both California and Nevada. In both instances, Charlene testified against him. In exchange for her testimony, Charlene was not charged in California and she agreed to plead guilty to murder and receive a sentence of sixteen years and eight months in Nevada. Gerald was convicted in both states and was sentenced to death in both states. His death sentence in Nevada was overturned in 1999 and he won the right to a new sentencing hearing, but the new jury also sentenced him to death. [Wikipedia]

Here is the beginning of Charlene Gallego’s serial murder career from Wikipedia where more detailed descriptions can be found.

On September 10, 1978, Rhonda Scheffler (age 17) and Kippi Vaught (age 16) were shopping at Country Club Plaza in Sacramento County when Charlene enticed them into their van. Gerald and Charlene raped and further sexually abused the two victims throughout the night in rural Placer County. Evidence showed that Charlene bit the breasts of one victim; and Gerald, the other. The next day, the Gallegos drove back to Sacramento County, where Gerald made Rhonda and Kippi get out of the van and walk across a field to a ditch. He hit the girls with a tire iron and shot them in the head with a 25-caliber pistol. As Gerald was walking back to the van, he saw one of the victims (later revealed to be Kippi Vaught) move; the bullet had only grazed her skull. He returned and shot her three more times in the head, killing her.

Charlene would later tell a cellmate how ecstatic she felt during this kidnap-rape.

11 victims: 8 women and teenage girls; one man; one pre-birth infant. 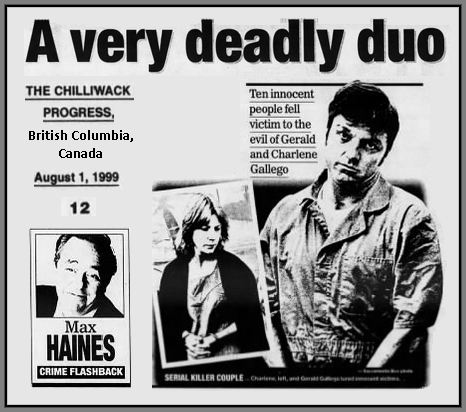 FULL TEXT: Their backgrounds were as different as chalk and cheese. Yet fate decreed thai they would meet, marry and murder.

Gerald Gallego was born on July 17, 1946, in Sacramento, Calif. By the time he had reached his 10th birthday, he had an extensive rap sheet, consisting of burglary and assault. As he grew into manhood, his criminal activity expanded to include rape, sodomy and assault with intent to commit murder. Occasionally he was apprehended, but he only spent a total of six years in prison during his criminal career.

You might say Gerald came upon his violent behaviour honestly. You see, his father was executed in Mississippi's gas chamber for the slaying of two police officers.

Conversely, Charlene Williams was born into an affluent, socially prominent family. She was a beautiful blonde child who gave no early indication of the precarious path she would follow. Charlene, who had an IQ of 160, played the violin with such natural flair that she was invited to study at prestigious conservatories. Despite her family's wealth and her own genius, Charlene began experimenting with drugs when she was only 12 years old. By the time she was 14 she was a heavy drinker.

While seeking drugs in South Sacramento, Charlene met Gerald Gallego. Within a week, the odd couple were living together in a quaint little home on Bluebird lane. A year later, they married.

What was the immediate Gallegos had one thing in common sex. Both had an insatiable appetite for sex, whether it was normal sexual relations or the kinkiest sex practices their active imaginations could conjure.

In 1978, the Gallegos came to the conclusion that they had exhausted every form and type of sex they could derive from each other. They wanted more. The evil pair decided to kidnap sex slaves. They purchased a 1973 Dodge van, which they equipped with a cot, ropes, tinted windows and curtains.

Charlene, who stood only five feet (all, easily passed for a teenager when suitably dressed. She trolled Sacramento's Country Club Plaza Mall until she spotted Rhonda Scheffler, 17, and Kippi Vaught, 16. Charlene had no difficulty starting up a conversation. When she invited the two girls to a party, they were eager to attend.

Sexually satisfied, Gerald struck both girls over the head with a jack handle. As they lay helpless, he fired several bullets into their heads, using the .25 automatic he had brought along for that purpose. The unholy duo returned to their home on Bluebird Lane.

Two migrant farm workers came across the bodies the next morning. Autopsies revealed the horror the girls had endured. Within three days, the girls were identified. Back at Bluebird Lane, Gerald and Charlene relived the thrills of their sexual rampage. They talked about it continually. In fact, they wanted to do it again.

On June 24, 1978, the Gallegos picked up Brenda Judd, 14, and Sandra Colley, 13, who were attending the Nevada Stale Pair. Charlene told the girls they could make placing flyers on the windshields of cars in the parking lot. Instead of earning money, the youngsters found themselves bound and gagged in the Gallegos' Dodge van.

The girls were raped, beaten and sodomized. Gerald hit both over the head with a shovel before shooting them in the head. He had brought along the shovel for a purpose. He dug a grave and buried their bodies. On the way home, he disposed of the girls' purses in the American River. Their clothing was tossed in a dumpster. The girls were reported missing and would remain missing for four years.

Ten months later, on April the Gallegos were on the prowl again. Karen Chipman- Twiggs and Stacey Redican, both 17, were the victims. This time, the girls were driven 300 miles into the Nevada desert before they were savagely molested, killed with a claw hammer and shot in the head.

Their grave was dug deep to keep out wild animals. That didn't deter a camper's pet dog, who began digging that same year at the site until he exposed a human arm. Karen and Stacey were identified through dental records.

In 1980, Charlene informed her husband that she was pregnant. Gerald was ecstatic. They would celebrate with a second honeymoon along the Oregon coast. On the way, they picked up a hitch-hiker. It was 21-year-old Linda Aguilar's misfortune to be picked up by one of the most heartless couples who ever drew breath. They showed her no mercy. Because the killing was not planned, Gerald had not brought along a murder weapon. He strangled Linda with his bare hands and buried her in a shallow grave.

On July 17, 1980 the vicious pair struck again. Virginia Mochel, 34, had just closed up the Boat Inn in West Sacramento when she was plucked from the inn's parking lot. After performing their vicious sexual acts on Virginia, they garroted her to death with fishing line and tossed her body into the Sacramento River.

The Sigma Phi Epsilon fraternity of California State University was having a party at the Carousel Restaurant in North Sacramento. Craig Miller, 22, and his fiancee Mary Beth Sowers, 21, were making their way through the parking lot to Craig's Honda Civic. Suddenly, he was staring down the barrel of a .25 automatic pistol held by a female in a ski jacket. Leaning out a car window was a man pointing a .357 Magnum at his head. The startled couple did as they were told.

As they boarded the Gallegos' vehicle, a friend saw the suspicious movements. After being threatened by the gun-wielding woman, he hacked off and noted the licence number- ROV240 as the Olds sped away. The Gallegos and their captives drove past foreboding Folsom Prison to a lonesome recreation area. Once there, Gerald shot Craig in the head three times. Mary Beth fainted.

The Gallegos returned with Mary Beth to their Bluebird Lane home in Sacramento. They proceeded to ravish their helpless captive for hours. Satisfied, they drove off into the night to a deserted area, where Gerald shot Mary Beth three times in the head with his .25 automatic.

Craig Miller's fraternity brother reported the licence number of the kidnap vehicle lo police. The Olds was (raced to the Gallegos. Police swarmed down on Bluebird Lane, but the suspects had fled.

Charlene's affluent parents, who had often provided funds to their daughter, were kept under surveillance. On Sunday, Nov. I6, they wired money via Western Union to Charlene in Omaha. When she showed up the following morning to claim the money, she was arrested. Gerald was in his vehicle near the Western Union office. He too was taken into custody.

Great pressure was put on Charlene to tell all in return for a guarantee not to be executed. It took more than a year before a deal was consummated. Charlene agreed to testify against her husband after being assured she would receive a fiat sentence of 16 years and eight months imprisonment.

In Nov. 1982, Gerald stood trial in California for the murder of his last two victims. He was found guilty of murder in the first degree and was sentenced to death. The state of Nevada insisted on trying Gallego for the murders of Stacey Redican and Karen Chipman-Twiggs. It took the Nevada jury only four hours to find him guilty of first degree murder. Por a second time, he was sentenced to death.

But Gerald Gallego was not to die that easily. This despicable man has managed to launch an avalanche of appeals in both California and Nevada. As this is written, he is a resident of Nevada State Prison's Death Row, 17 years after he was sentenced to death.

On Jan. 17, Gerald Gallego, Jr., was born in a hospital prison ward. Today he is 18 and holds the dubious distinction of having both his father and grandfather convicted of being multiple murderers. He was raised by his maternal grandmother. In 1997, Charlene Gallego completed her sentence and was released from prison. 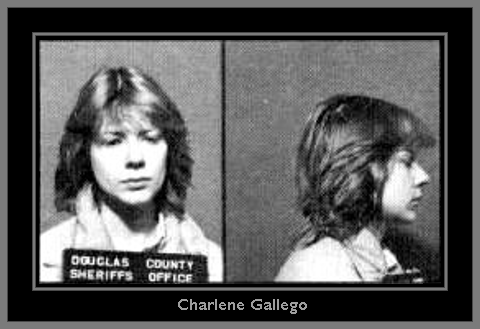 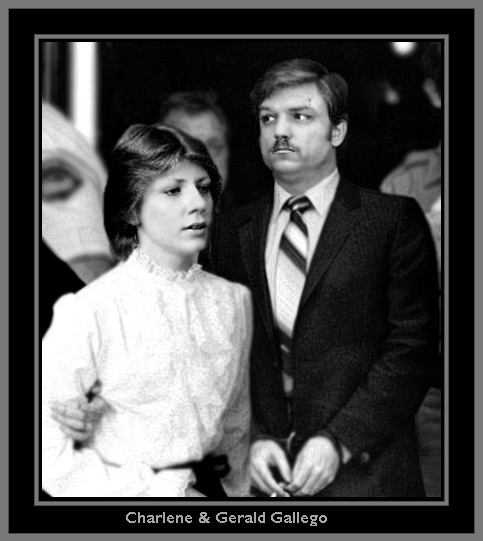 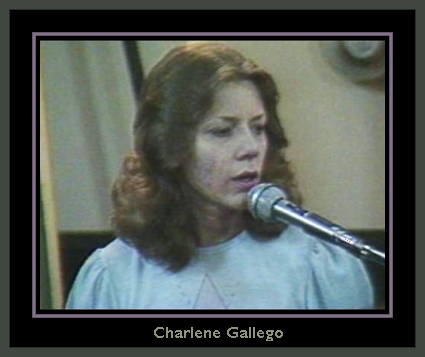 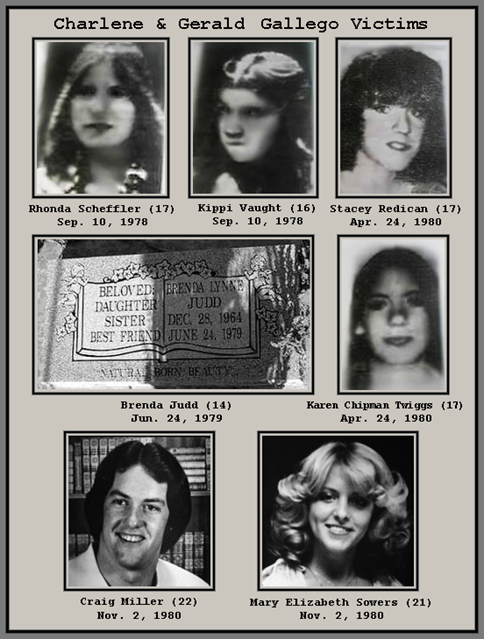 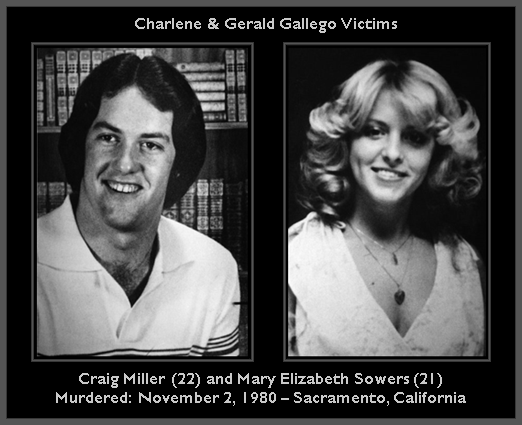 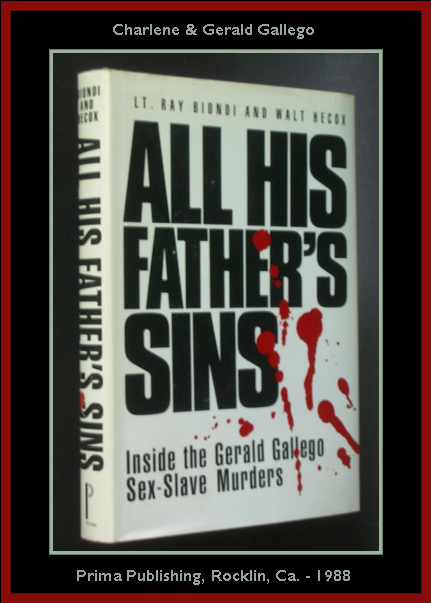 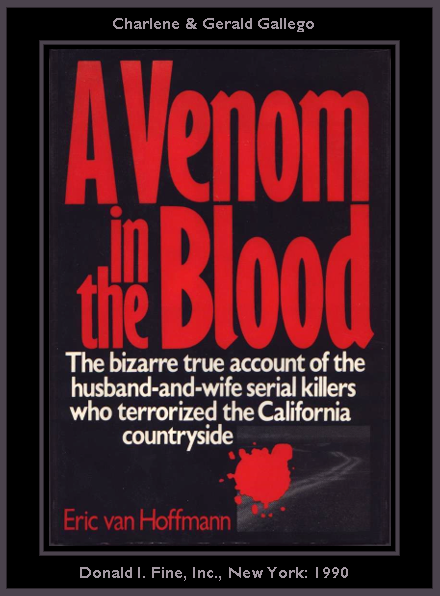 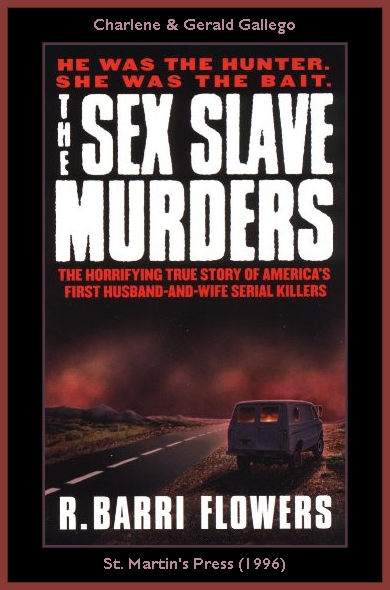