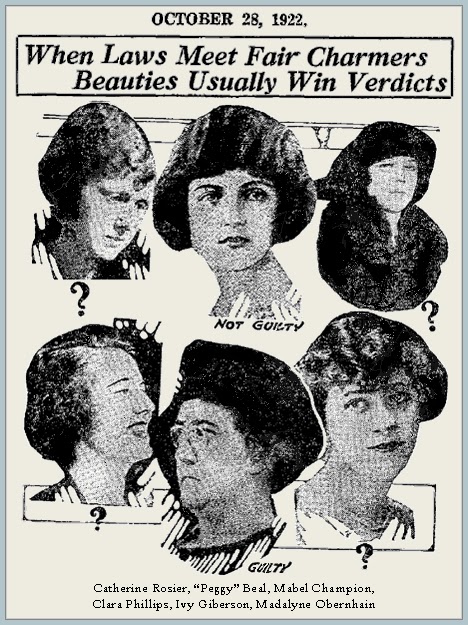 FULL TEXT: Cleveland, Ohio, Oct. 28. – Feminine beauty! Through the ages, kings and kingdoms have fallen because of it, and American murder juries continue to fall for it.

Ask any criminal lawyer. He will tell you that youth, beauty and charm is as valuable to a woman on trial for her life as a rock-ribbed, copper riveted alibi.

Court records from all sections of the country bear out this assertion. It is as difficult to convict a pretty woman of murder as it is for the Biblical camel to pass through the eye of a needle.

The latest instance is the case of “Peggy” Marie Heal, blessed with an abundance of beauty and charm. “Peggy” shot her sweetheart in Kansas City after he had told her of his fifty other loves.

“I did it to save other girls,” Peggy told the jury, demurely glancing at the jurors. A tear, or two, a shudder and the jury broke all records in returning of not guilty.

But in the dingy little courtroom at Texas River, N. J., Ivy Giberson was on trial. She also was charged with murder – for the slaying of her husband.

When she faced the jury, middle-aged, she had lost much of her youthful charm. Her face, wrinkled with care and suffering, was turned to the jury in a mute plea as she finished her testimony.

“Guilty” was the verdict, and Mrs. Giberson now is about to spend her declining years behind the bars of the Jersey penitentiary unless new efforts to lesson the penalty succeed. Three other women, each possessing youth and comeliness, now are on trial in widely separated cities.

Mabel Champion, 22 and decidedly pretty, is facing the death chair in Judge Maurice Bernon’s court here. She is charged with shooting a man to death in a downtown restaurant. Prosecuting her is Edward C. Stanton, State’s Attorney of Cuyahoga County; who has sent more murderers to the electric chair in less than two years than any of his predecessors did in four.

But Walter D. Meals, former appellate judge and her chief counsel, isn’t worrying. Meals is dependant upon his client’s grace and as much charm to his expert knowledge of the law. Meals is a psychologist.

His client appears in court, in gowns carefully designed for the trials, gowns which accentuate her delicate beauty and bring out every physical charm. Her every act in the courtroom has been carefully rehearsed. She is playing a part in a drama the climax of which may be—DEATH.

In Los Angeles, Clara Phillips, accused of the grewsome hammer slaying of Alberta Meadows, is on trial. She also is comely and fair to look upon, and no one will be more surprised than the State’s attorneys if the jury convicts her of murder in the first degree.

Philadelphia also has it’s beauty on trial. She is Catherine Rosier, charged with the killing of her husband and his alleged stenographer-sweetheart in his office. Her acquittal is predicted.

And out in a Los Angeles jail cell is Madalyne Obenchain. She also has youth and beauty. Twice the State has attempted to send her to the death chair for the murder of J. Belton Kennedy, but each time, the jury has disagreed and now she is awaiting her third trial, which is almost certain to result in her acquittal, according to close observers. 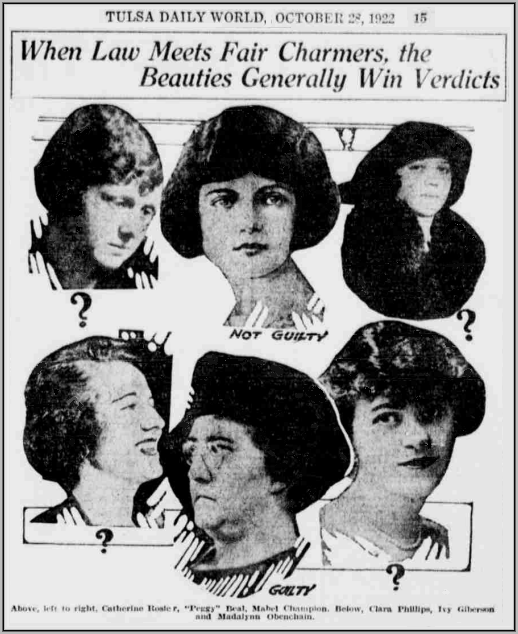