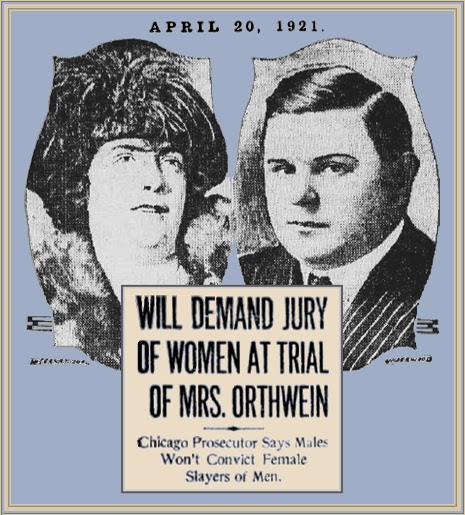 Mrs. Orthwein, charged with in the death of Herbert Keigler, one of the executives of the Goodyear Tire & Rubber Company, was in court to-day for the date of her trial to be set. She collapsed when led into the courtroom by her attorney, Ben Short, and cried incessantly throughout the proceeding. The case was continued until May 16.

Mrs. Orthwein, who said following Zeigler’s death, “I loved Herb, and I killed him,” said she shot him in self-defense when he broke into her “gold coast” apartment. 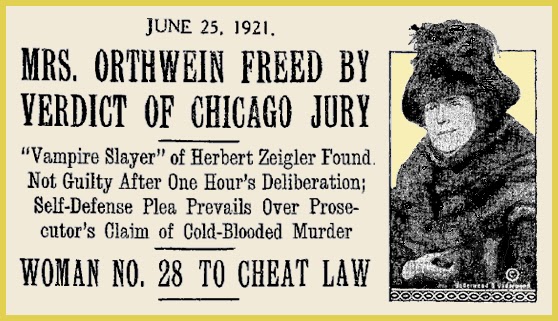 FULL TEXT (Article 2 of 2): June 24.—Mrs. Cora Elizabeth Orthwein was found not guilty by a jury tonight at her trial on a charge of having murdered Herbert P. Zeigler.

The jury reached its verdict after less than an hour’s deliberation. Mrs. Orthwein, when she heard it, thanked the judge and jurors and then fell back in her seat, apparently in a fainting condition. Later she was taken to the home of her sister.

The verdict followed the re-enacting in the court room of the tragedy which took place in Mrs. Orthwein’s apartment on the night of March 1. During the closing arguments, George Guenther, attorney for the defense, donned the bullet-pierced overcoat of the dead man to show how he met his death while attacking Mrs. Orthwein, after having battered his way through two doors to reach her bed room.

Previously Lloyd Heth, assistant state’s attorney, had asked that she be sent to prison. He pictured her as a revengeful woman, who murdered in cold blood because of the jealousy which she had testified pierced her heart like a dagger. He declared that Zeigler was shot in the back while sitting down. 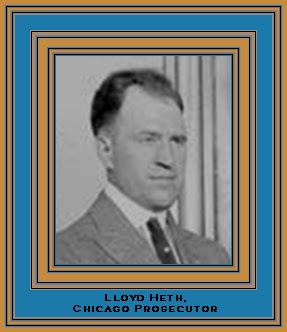 “Her defense is built on lies and lies.” said Heth. “Cora Orthwein violated the laws of God and man. She must be punished for her crime.

“She told you that she was trying to reform Zeigler. Does it look as though she were reforming him when at 8 o'clock the night before Ziegler was killed, she mopped his brow with a towel, combed his hair and placed a bottle of booze in his pocket?

“Look at this woman. The life the she has led has hardened her. She is the ‘I’ll kill you’ type. You can see it in her eyes. You men have to contemplate her as a woman of the world – a woman who knew sooner or later that the alleged love of Zeigler must turn to contempt. She knew the game she was playing.”

Mrs. Orthwein was the twenty-eighth woman acquitted at trials on charges of murder in Cook county in the past ten years. During that period only three women have been convicted. 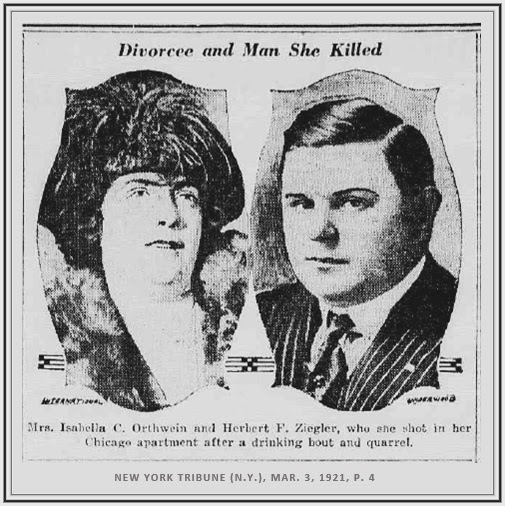