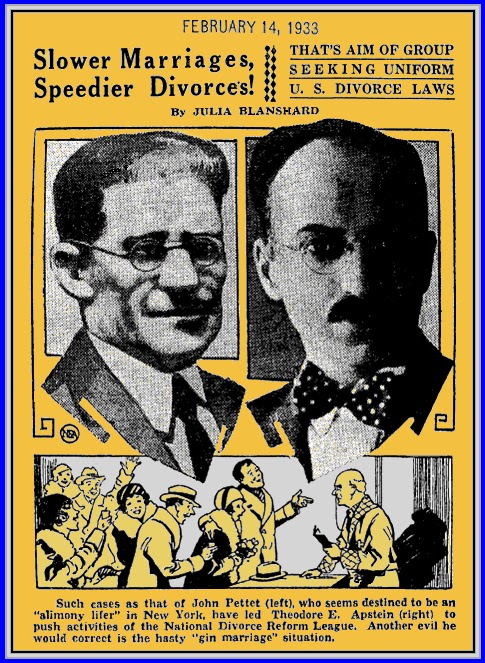 ILLUSTRATION CAPTION: Such cases as that of John Pettet (left), who seems destined to be an “alimony lifer” in New York, have led Theodore E. Apstein (right) to push activities of the National Divorce Reform League. Another evil he would correct is the hasty “gin marriage” situation.

FULL TEXT: New York — Making it easier to get divorce decrees and more difficult to obtain marriage licenses will create more respect for the law and at the same time help to solve one of America’s biggest social problems, according to Theodore B. Apstein, chairman of the National Divorce Reform League. . . .

This January, the first bill looking towards a uniform marriage and divorce law for the entire United States, drawn up by the League, will be introduced into the New York legislature by Assemblyman Brownell. Its claimed aims are to:

-- Prevent diseased, insane, tubercular or feeble-minded from marrying. [Note: This derives the same Eugenics philosophy promoted by American Progressives which was picked up by German National Socialists during this period.]

-- Make divorce easier and alimony depend on financial condition.

Today New York city alone has 80 men who are imprisoned just because they cannot pay alimony. Poverty is no excuse for the law. For instance, 58-year-old John Pettet has all the earmarks of becoming an “alimony lifer.” Seven contempt-of-court orders to pay alimony accrued during his incarceration and his formerly flourishing radio business has been shattered. He has no chance of making money to get him out again.

For every $500 alimony owed, another New York man now gets three months in jail, regardless of the ability of his former wife to support herself, and if the alimony debt goes even one dollar over $500, the man gets a second three months term added to his sentence.

Under the new uniform marriage laws, a man and woman would have to be sure they wanted to get married. It would require a two weeks period between application for a marriage license and its issuance and both parties would be present when it is issued. Applications would be posted and published in the newspapers during the fortnight, thus giving parents, friends and possible present married mates a chance to correct erroneous statements and would prevent wholesale midnight party weddings or “gin” weddings. With the consent of parents, girls 16 and boys 18 could marry, but without parent’s consent they must be, respectively, 18 and 21. And a marriage which is legal in the state in which contracted, would be recognized In all states in the union.

The new law would speed divorce by including in the “grounds” cruel or inhuman treatment, which might mean incompatibility, abandonment or failure to provide for a year, incurable insanity and the commission of an infamous crime. Also defendants must appear in court or be represented. Alimony would be paid by either the man or woman, according to the financial condition, and circumstances of both and the children would be the first consideration, regardless of which has been awarded their custody. No divorced man or woman could remarry within three months.

Apstein also believes that there should be a legal minimum lawyer’s fee for securing a divorce. Today you can shop around, Mexican divorces, without your ever having to go down there, cost $3.50. But they have never been attested legal in the states and so are a relatively unsafe buy. In these hard times when many men and women are staying married only because it is cheaper to run one establishment, Reno offers divorces for $125. New York has them for $250, Lower California in Mexico for $60. Apstein points out that if a minimum fee is posted, shysters will be prevented from claiming to get divorces for next to nothing when such divorces have never been secured legally.

There are thousands of men paying alimony today to women who are able-bodied and could be self-supporting. New York had 300,000 alimony payers in 1929. They range from a few dollars to thousands weekly. Graham MacNamee pays $1,000 weekly to his ex-wife. Charles Levine, first trans-Atlantic air passenger, pays $135 weekly; Captain John Wanamaker, jr., $27,000 yearly. One millionaire Westchester yachtsman was sued last summer simultaneously by Wife No. 1 and Wife No. 2 for non-payment of alimony.

The National Divorce Reform League, though only a little more than a year old, now has 22,000 members, 25 per cent of whom are women.