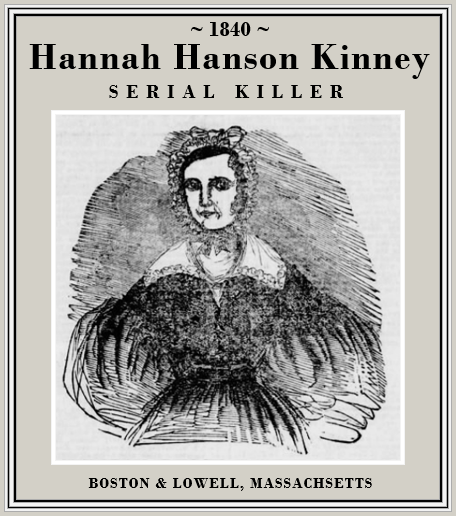 FULL TEXT: A coincidence has occurred, which, as Pepys would have said, “it is pretty to observe,” while Madame Laffarge in France, and Mrs. Cutts in England, have been charged with poisoning their husbands, we learn by the American papers that a similar accusation is preferred against a Mrs. Kinney, at Boston. Mrs. Kinney, whose maiden name was Hannah Hanson, was first married to a Mr. Witham; from whom, after having given birth to four children, she was divorced, and married to Mr. Freeman, a clergyman. Mr. Kinney, it is said, assisted in procuring the divorce; and after the second marriage, he was in the habit of visiting Mrs. Freeman’s house. During one of his visits, Mr. Freeman was taken ill, and died; and his symptoms have since been supposed to indicate that he had been poisoned. Mrs. Freeman was thus free to marry a third time. It is observed as a suspicious circumstance, that soon after she married Mr. Freeman, her husband’s father died suddenly, while the newly-married couple were on a visit at his house. Freeman's body was exhumed in August; and it was found to be in a remarkable state of preservation. Mrs. Kinney is in custody; and an investigation, to which she is said to have opposed no obstacle, is shortly to take place.

Excerpt from a book on the history of Lowell, Massachusetts, published in 1868.

“The Minister’s Wooing” had deeply exercised the ladies of the First Baptist Church, long before that subject employed the pen of Mrs. Harriet Beecher Stowe. Church Committees, Ex Parte Councils and Mutual Councils were again and again appointed to consider the scandals growing out of the courtship of Rev. Enoch W. Freeman and Hannah Hanson. Mr. Freeman was, of course, sustained; but there was still an undercurrent of discontent in the church, on account of his connection with this remarkable woman. She was a native of Lisbon, in Maine, was the cousin of Mr. Freeman, and had had some tender correspondence with him in early life. In January, 1822, she was married to Ward Witham, at her father’s house in Portland. Four children were the fruit of this marriage, which proved anything but a happy one. In February, 1832, the Supreme Judicial Court, sitting at Boston, granted her a decree of divorce from the bond of matrimony, on account of the criminality of Witham. A correspondence between Mr. Freeman and her soon afterward commenced, which culminated in their marriage, September 23rd, 1834. For six months they boarded with Mrs. Charlotte Butler, whose son Benjamin—the future proconsul of New Orleans — was at that time intended for the Baptist ministry.

As Pope sighed “How sweet an Ovid was in Murray lost,” so may others lament that a Boanerges of the pulpit was spoiled in Butler. In March, 1835, Mr. and Mrs. Freeman made a visit to the father of Mr. Freeman, in Maine. During that visit, the elder Freeman suddenly died, exhibiting the same symptoms which were afterward observed in the case of his son.

Mrs. Freeman continued to be the subject of scandal after her marriage, en account of her supposed intimacy with George T. Kinney of Boston, who had assisted her in obtaining her divorce, and to whom she was said to have been engaged. It was said that Kinney was a frequent visitor at Mr. Freeman’s, house, and that he was there on the morning of Sunday, September 20th, 1835. On that day, after morning service, Mr. Freeman became suddenly ill, and experienced repeated vomitings. He, however, returned to his pulpit, and commenced the afternoon services, but was unable to proceed, and returned to his house. He continued to grow worse, suffering intense pain internally, until five o’clock on the morning of the following Tuesday, when death released him from his sufferings. He was thirty-seven years of age, and had been married exactly one year. He was a most uxorious husband, and on his death-bed requested that all his wife’s children by Witham should adopt his surname. If he really died by poison administered by his wife, his last words to her—” Never feel alone; I shall always be with you”—must have come home with terrible emphasis to her depraved soul.

Just as he closed his eyes in death, he was asked whether he had any advice to leave to his church. He replied, “Tell them to be humble, faithful, zealous and united in love.” A post mortem examination showed his stomach to have been highly inflamed, but the contents were not subjected to a chemical analysis—no suspicion being then entertained that the death was caused by poison. Mrs. Freeman appeared to be deeply affected by her bereavement. One week subsequently, she was confined. She remained for some time in Lowell, keeping a milliner’s shop on Merrimack street. She afterward removed to Boston, from whence she sent a weeping willow to be planted by the monument erected over Mr. Freeman’s grave. On November 26th, 1836, she was married to George T. Kinney, a man five years younger than herself—a drunkard, a roue and a gambler. On August 10th, 1840, Kinney died in a manner similar to Mr. Freeman; and a coroner’s jury found that his death was caused by poison administered by his wife.

Long before the death of Kinney, suspicions had been entertained in Lowell that there had been foul play with Mr. Freeman—that his wife had been guilty of the “deep damnation of his taking off.” In consequence of these suspicions, one week subsequent to the death of Kinney, Mr. Freeman’s remains were exhumed in the Middlesex street burying-ground and found to be in a remarkable state of preservation. Many a subject has been used to illustrate anatomical lectures, which was more decomposed than the body of Mr. Freeman.

Immediately after Kinney’s funeral, Mrs. Kinney made a visit to some of his friends in Thetford, Vermont. There she was arrested and taken back to Boston to stand her trial for murder. On her way thither she stopped at Lowell, arriving here on Sunday afternoon, August 30th. After a few moments’ delay, at the American House, she again left in the stage for Boston, in the custody of an officer. Just as the stage was leaving, the congregation to whom Mr. Freeman had ministered, and among whom she had once moved in all the dignity of a pastor’s wife, poured along the streets at the close of their afternoon services. With what emotion they gazed on the weeping prisoner, and with what agony she met their gaze, it is easier to imagine than describe.

The trial of Mrs. Kinney for the murder of Kinney began December 21st, 1840, and closed on Christmas Day. The defence was conducted by Franklin Dexter and George T. Curtis. Although she was acquitted by the jury, there have always been persons among those who knew her, who have persisted in believing that she was guilty, — that she poisoned two husbands and one husband’s father,—in short, that she was an American Lucretia Borgia. But while the deaths of the three supposed victims are most easily explained upon the hypothesis of poison, the total absence of motive on the part of the accused, envelopes each case in the gravest doubt. [Note: The compulsive killer’s motive – deriving pleasure for killing – is different, much less logical from the point of view of the ordinary person, than the purely instrumental killer, but this was unknown at the time.] 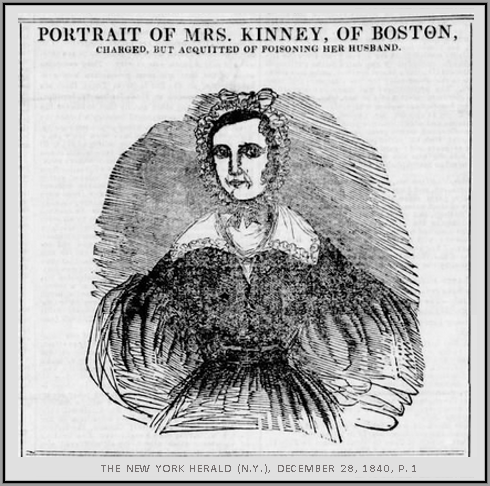 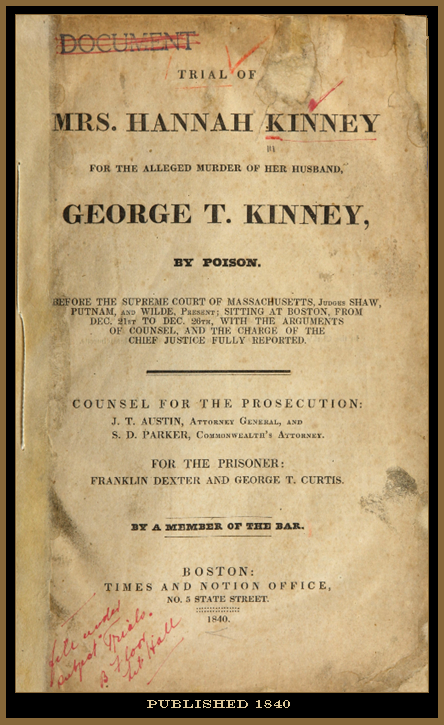 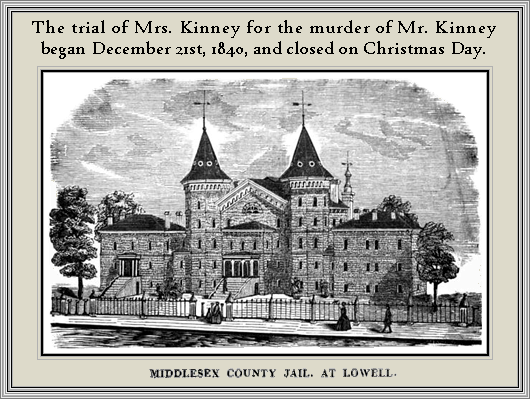 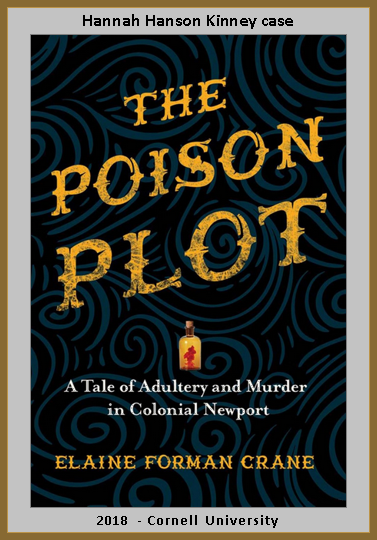