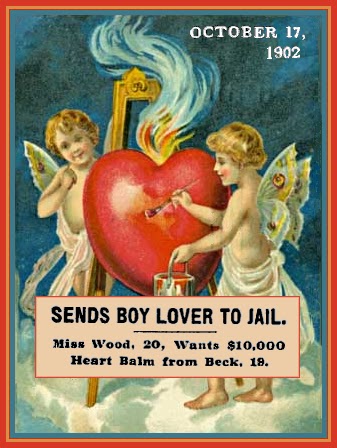 FULL TEXT: A nineteen-year-old boy named Michael Beck was locked up in Ludlow Street Jail yesterday because of his inability to furnish $2,000 bail in a suit brought against him by Matilda Wood, twenty years old, for breach of promise of marriage. She wants $10,000 damages.

Miss Wood avers that she met Beck in January 1901, and that he immediately professed the most ardent love for her. She says he visited her daily and wrote her fifty fervent love-letters in as many days. On June 16, 1901, Beck, she declares, asked her to marry him, and she assented. They went to Portchester to a clergyman's, but Beck being only eighteen and she nineteen the minister refused to perform the ceremony.

Then Beck’s love cooled and he wrote breaking the engagement.