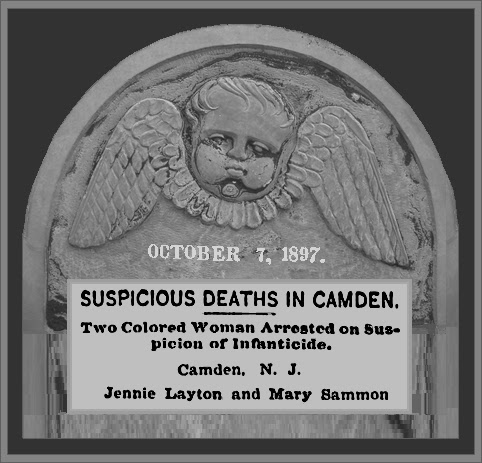 FULL TEXT: Camden, N. J., Oct. 7. – Mrs. Mary Sammon and Mrs. Jennie Layton, two colored women, were arrested on suspicion of being concerned in the deaths of three children, all of whom died under suspicious circumstances requiring a coroner’s certificate. The matter first came to Coroner Lippincott’s attention yesterday when he was called to the women’s home in connection with the death of Joseph Beckinridge, aged 2 years, a foster child of Mrs. Sammon. The boy’s lips and hands showed what looked like carbolic acid burns. Mrs. Sammon said the boy had been treated for diptheretic sore throat, and denied having administered any poison. In view of the past deaths at the house and the present suspicious circumstances the coroner ordered the arrest of both women.

From an investigation it was learned that all of Mrs. Layton’s five children had died, and a coroner’s certificate was required in each case. The coroner said he was first called to the house on Sep. 17, and gave a certificate in the case of Joseph Layton, aged 2 years. Four days later Erastus Layton, aged 2 months, also died suddenly. Yesterday a post mortem examination on the Breckinridge boy was made, but before arriving at a decision it was decided to submit the heart and lungs to a chemical analysis. The remains of the two Layton children may be disinterred.