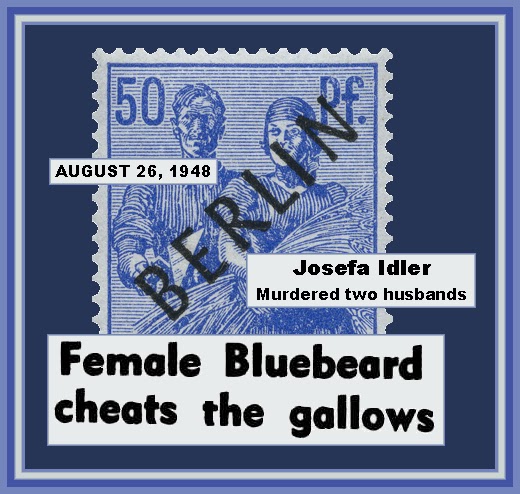 FULL TEXT (Article 1 of 7): Berlin – Josefa Idler, Polish-born 58-year old female Bluebeard, who had been condemned to death for poisoning: her third and fourth husbands, was found dead in her cell yesterday.

Detectives said that she kept a “perfect household,” but got rid of her husbands because they had failed to support her in comfort.

It was said that she had killed her second husband and had put the body in a sack on the wall of a Berlin cemetery.

This charge was dropped 12 years ago because the case could not be proved.

In the court on Tuesday, however, Josefa, small, stout, and thin-lipped, her greying hair drawn tightly back from her broad, heavy-featured Slav face, impassively heard witnesses tell how her first marriage had embittered her for life against men.

She was arrested after the step- daughters of the last marriage had asked for an autopsy of their father’s body.

Arsenic was found in the bodies of the third and fourth husbands. Police said yesterday that a post-mortem would be necessary to ascertain the cause of her death.

FULL TEXT (Article 2 of 7): Berlin, Aug. 24. – Josefa Idler, 58-year-old charwoman, known as the “female Bluebeard,” today was sentenced to death for the murder of the last two of her four husbands.

After her last husband died in January, 1947, his family became suspicious. His body, with that of husband No. 3, was exhumed. Both were found to contain large quantities of arsenic.

In 1936, the woman was arrested when the body of her second husband was found cut to pieces and sewed up in a sack a few hundred yards from her home. She was held for three months, but released for lack of evidence.

Her first husband is believed to have died a natural death.

FULL TEXT (Article 3 of 7): Berlin, Aug. 26 – Police today ordered an autopsy in the death in her prison cell yesterday of Josefa Idler. She was sentenced to death Tuesday [Aug. 24] for the poison slaying of two of her four husbands.


FULL TEXT:  (4 of 7): Berlinn – In the person of the 58 year old Josefa Idler now Germany has its own female Bluebeard. The jury trial began last Monday. Mrs. Idler is charged with poisoning her third and fourth husbands. She specialized in getting small pensions following the deaths. Idler was sentenced to death. She objected to the conviction.

FULL TEXT (5 of 7): Berlin – The 64-year-old Josefa Idler, Berlin’s female Bluebeard, who was sentenced to death for poisoning two of her four spouses on Tuesday, was found dead in her cell yesterday. The court ordered an autopsy of the corpse. 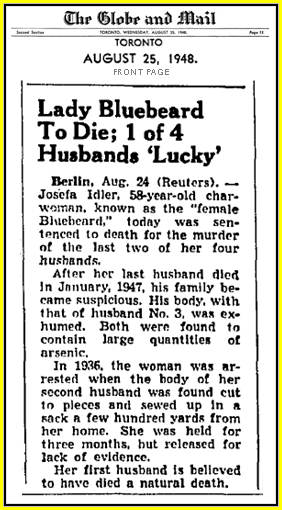