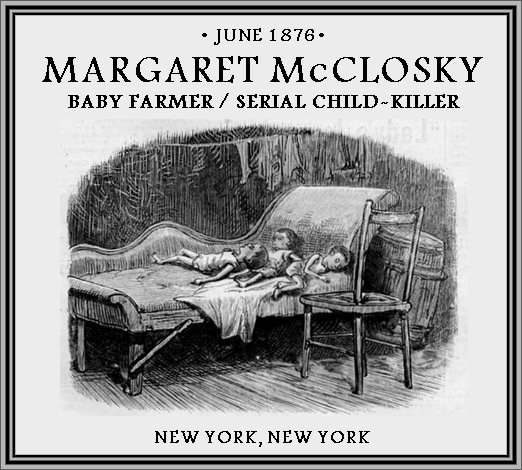 FULL TEXT: The cries of infants on the first floor of the house at No. 324 East Twenty-fifth street have for some time past been heard by two neighbors day and night. The apartments are occupied by Mrs. Margaret McCloskey, who advertises herself as a “wet nurse.” Mrs. Elizabeth Clifford, of No. 123 West Third street, hearing that the infants were improperly cared for, visited the floor, and discovered that they were sickly, weak, and apparently dying. She reported the case at the Eighteenth Precinct Station-House, and Officer Alexander Gerner, of the Society for the Prevention of Cruelty to Children, was ordered to investigate the matter. He went to the place with Police Officer Goldwait. At the house they found six small children, most of them only a few months old, though one was about 3 years of age, lying about the room in a most pitiable condition of neglect, some of them apparently dying for lack of food. There was only one cradle.

Two of the children were held by the women in the room, of whom there were three, two of them servants out of situations. The third, Catharine Conklin, had lived with Mrs. McCloskey for three or four months. The babies appeared neglected and dirty, the legs and arms of some of them being no thicker than a man’s thumb. The officers sent for ice, food, and a physician, and left the children for the night in charge of the woman who owned the house. Mrs. McCloskey herself was not at home, but came during the night and carried away one child. She called upon the mothers of two others, who reclaimed their children. 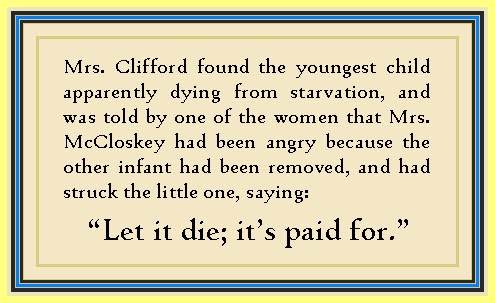 Officer Gerner arrested Mrs. McCloskey yesterday afternoon, and took her to the Fourth District Court in Fifty-seventh street, where she was held for trial in $1,000 bail. Catherine Conklin was held for examination. One of the servants said that Mrs. McCloskey had kept an establishment on Second avenue, between Thirty-first and Thirty-second streets until about two weeks ago, but the neighbors were curious to know why there were so many children there, and the woman had moved to her present residence. Mrs. Clifford stated that an English friend of hers who had been deserted by her husband, left her two children, one a few weeks old, the other 14 months old, with Mrs. McCloskey, while she filled a position as wet nurse, agreeing to pay $18 a month for their board. During the last two weeks Mrs. Catharine French, of No. 123 West Thirty-third street, visited the babies, and last Friday, seeing that the oldest one was failing, took it away.

On Monday Mrs. Clifford found the youngest child apparently dying from starvation, and was told by one of the women that Mrs. McCloskey had been angry because the other infant had been removed, and had struck the little one, saying: “Let it die; it’s paid for.” Mrs. McCloskey says she moved to No. 324 East Twenty-fifth street about a week ago; and that she lived on Second avenue, above Thirty-first street, for the six weeks previous, and before that she had kept a servants’ boarding-house, took children in board, always taking good care of them. She is a slim woman, neatly dressed, of medium height, with black eyes and hair and thin face. 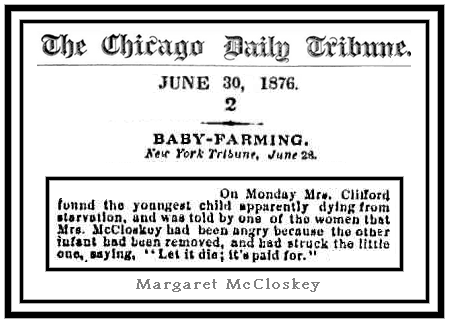