The Origins of Divorce Court Corruption - 1805 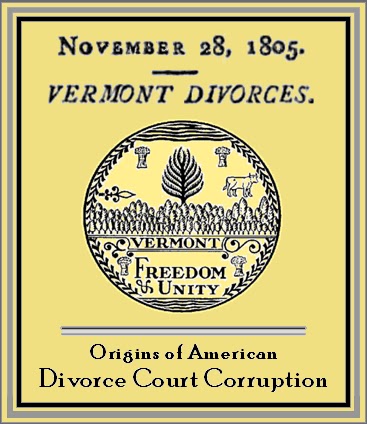 The following article, whose text was in 1805 excerpted from a longer article (“The Rutland Letters, Letter X – and Last,””) originally published on Aug. 6, 1805 in The Post-Boy and Vermont & New Hampshire Federal Courier (Windsor, Vermont), was widely reprinted throughout the nation. Although this piece is of great importance in aiding us to understand the development of family law in the United States, it does not appear to have been discussed by any legal historian.
The practice of filing out-of-state divorces by one spouse without honestly giving notice to the other became epidemic by the mid-nineteenth century, providing great revenue to judges, lawyers and hotel-keepers. This in turn led to an increase in alimony scams and parental kidnapping.
FULL TEXT:
~ VERMONT DIVORCES. ~
It cannot denied that the facility of obtaining bills of divorce, has greatly tended to render us contemptible in the eyes of our neighbours; and the little respect our Judges entertain for the sacred institution of marriage, has encouraged the dissolute of both sexes in every quarter of the union, to repair to our state, and make our laws subserve their wicked and immoral purposes.
Every libertine who is tired of his wife, or who from base and corrupt motives, is desirous to transfer his property and worthless affections to another woman; and every woman, who is infamous enough to abandon her husband and children, may fly to Vermont; and by circulating a libel in the form of a Petition, as far as a country paper will convey the notice, and paying the necessary fees (which constituted a very considerable emolument to our judges) can obtain a decree of our court, dissolving the bands of matrimony. The statute indeed requires that one of the parties should have resided in this State, at least one year; previous to granting a divorce; but there are several instances on record, of bills without even requiring proof to establish any previous residence. We shall soon have business enough of this kind in our courts, when it is known to the people of Carolina or any other, remote State, that a short visit of two months from home, will be quite sufficient to free a man from a disagreeable companion, and the incumbrance of a family, during the remainder of his life.
“Do we not publish a citation say our judges in some of our news-papers; and afford an opportunity to the other party, to appear and resist any improper attempt to impose on our Courts.” Pretty reasoning this! – How shall an innocent wife, five hundred miles distant, living perhaps in the interior of the country, become acquainted with every advertisement in every one of our Village papers? The first sight of the advertisement is perhaps accompanied with a copy of the record of that decree, which strips her of property; deprives her of a husband; and separates her from her children? – On this solemn, this awful subject, it is impossible for a wise or virtuous man to reflect without being agitated by alternate emotions of horror and indignation.
It is really opening Pandora’s Box, and giving wings to every evil that can poison the felicity and morals of society. It casts a ridicule on the sacred institution of marriages; produces a confusion of progeny; creates discord in families; corrupts public and private decency; and introduces a depravity of manners, which every man of feeling and sense, ought to repel as an enemy to the honour and happiness of his wife and daughters. In such a state of things where shall we look for that faithful and dutiful devotion of the heart, which is the most powerful inducement to a state of wedlock? – where find that perfect confidence and security, which are inspired by a belief, that, death only can sever that religious bond which reunites individuals of different sexes together, and impels them by the irresistible influence of affection, and the consciousness of a common indivisible interest, to maintain all the tender relations of father, son and brother?
[“Vermont Divorces,” New England Palladium (Boston, Ma.), Aug. 16, 1805, p. 2]
***
[960-11/12/21]
***
Posted by St. Estephe at 7:25 PM