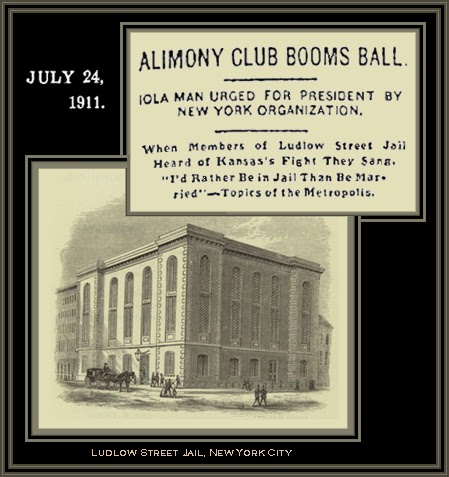 NOTE: Despite the reference to an “Anti-Alimony Association of America” in this article it would seem that this organization was an unrealized dream.

FULL TEXT: July 26—If Peter Ball of Iola, Kansas, will come to New York and visit the Ludlow Street Jail he will be given a reception by the Alimony Club there which will excel anything the happy organization ever has done in the way of paying homage to a hero.

Ball recently was released from the Allen County, Kansas, jail, where he spent twenty two months for refusing to pay alimony. He paid the court costs of the action brought against him, amounting to $191, but not a cent of alimony did he jar loose from.

The news of Ball’s great victory reached the Ludlow Street jail last night immediately the president of the Alimony Club called the members together in the ballroom and informed them of what Ball had done. When he cheering ceased the president, suggested that if Ball could de induced to visit New York and the Ludlow jail a grand reception would given him. The other members were immensely enthusiastic over the idea.

“Will we show him the respect due him?” said the president, when asked about the matter. “Well, let me tell you — if Mr. Ball visits us we’ll meet him with lard in our hair. Never — never — has one of our ilk won as grand a victory. Beyond the remotest possibility of a doubt he will be elected national president of the Anti-Alimony Association of America at the 1912 convention. We are, thinking seriously of petitioning President Taft to appoint him and alimony commissioner of the United States.”

The story of Ball’s fight for twenty-two months was read to the members if the Ludlow Street Alimony Club by the president. At the conclusion the club gave three cheers for “Brother Ball” and dispersed after the alimony quartet had sung the club song “I’d Rather Be In Jail Than Be Married.”