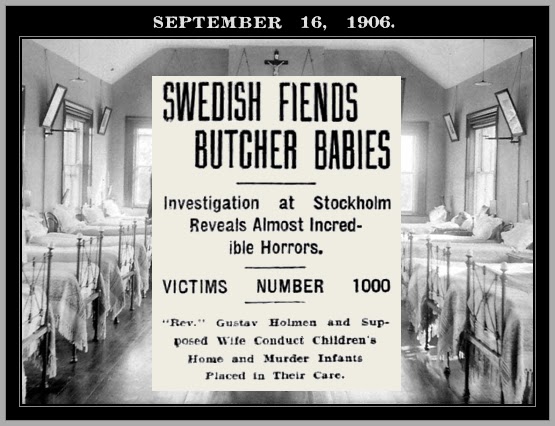 FULL TEXT: Stockholm. Sept. 15. – Revelations concerning the “National Children’s Sanitorium” have just been announced after an investigation by the authorities, which has been going on for some weeks. It appears that the alleged sanitorium was simply a baby-farm on in immense scale and that wholesale murders of babies were committed.

The authorities are trying to trace the Rev. Gustav Holmen and the woman who passed as his wife. They were the heads of the sanitorium. It was situated on a little island in the Lilla Vartan, to the south of this city. There the man and woman established themselves some years ago in a group of farm buildings. He posed as a minister of the gospel and she as a trained nurse and specialist in children and their bringing up. Their very audacity in coming to the capital and in making their appeals to the highest in the land made their scheme successful.

They secured numerous contributions in especially handsome amounts were subscribed to the building fund, it is true that some building was done, but these were in the nature of additions to the farmhouse and other buildings and did not entail much expenditure.

The couple advertised extensively. It was generally understood that babies orphaned or with parents too poor to look after them were received free. Parents who, on account of work, found their babies for the time being in the way. also sent them to the sanitorium. It has been discovered that very few children were received free and that various sums were extorted either in a lump sum or by installments. A specialty was paid to babies brought by domestic servants and other girls who had been endowed with illegitimate offspring. These or their lovers all had to pay heavily for the privilege of finding a home for their babes. It is calculated that in the three years the institution has been running over 1000 babies had been received.

Yet only 13 babies are alive and well. These were the healthiest, fattest and prettiest of those received, and were used as decoys or show babies. They were shown to mothers and to all visitors and their pictures were sent out on the literature used.

The investigation was the result of the visit of a young girl whose mother love was too strong for her. She had taken a baby to the place and surrendered it as a good way to get rid of it. Some few days later her lover yielded to the entreaties of the young mother and married her. She rushed off to reclaim her infant. The proprietress at first refused, but as the girl grew stronger in her demands a baby, one of the show 13, was brought to her. She denied it was hers and created a scene. She saw the whole 13 and refused them as not hers.

Then the Rev. Gustav and the woman commenced to turn ugly and said she would be kept prisoner on the Island until she became tractable. The girl replied that her husband knew where she had gone and what her errand was and that if she did not return on time he would come with the police to search for her. The couple were frightened and let her go. She went at once to the police, but it is thought she was tracked, for when the police went to the island some hours later the “Rev. Gustav” and his female companion had fled. They had secured practically all the funds from the bank and taken everything portable of value. The few servants employed on the baby farm were arrested, but after a lengthy examination were discharged. They knew nothing of the happenings that threw very much light on the subject. It is believed that the guilty couple fled to the United States, or at least that the “Rev. Gustav” went there. It is also thought that he may have abandoned the woman and sailed alone with the plunder, for an anonymous letter was received from Hamburg in her hand writing giving some details too horrible for publication.

From the servants it was learned that 73 babies were received the last month. The place where the bodies of 60 were buried has been discovered.

The Infants had apparently been murdered soon after being received and probably immediately after those who brought them had left the island. It is thought that at the first the babies were simply drowned, but that it was a dangerous practice, for the bodies were washed ashore and turned over to the police. The “Rev. Gustav” was a skilled butcher, according to the anonymous letter, and some of his methods of getting rid of the children were too ghastly for publication. 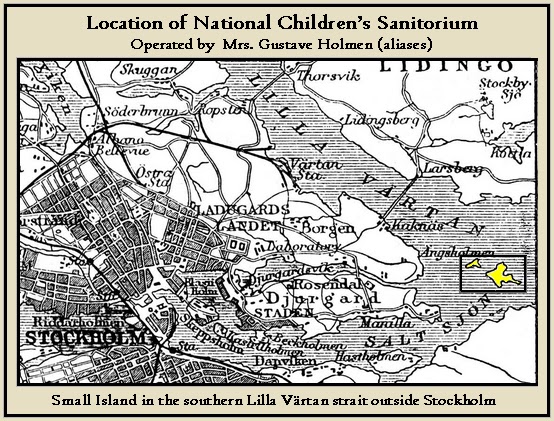 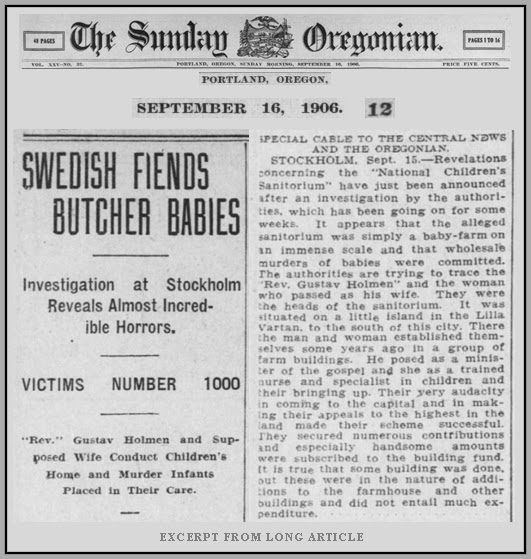