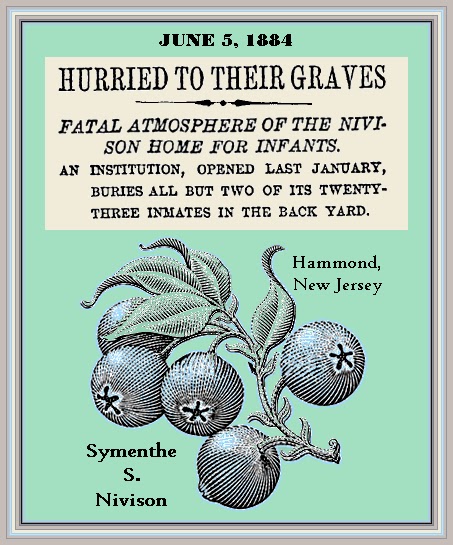 FULL TEXT (Article 1 of 4): Philadelphia Pa – In the yard of the Nivison Home in Hammonton, New Jersey, the bodies of twenty-one children have been discovered in rude pine boxes. The home was started by Miss Nivison in January. Circulars were sent out couched in language of pity and philanthropy.

Since then twenty-three babies have been received and of that number only two are alive Ezra M. Hunt Secretary of the State Board of Health discovered that the children had been buried without permits. An inquest was held to-day. The verdict was that the children had died from neglect and improper treatment.

Nothing could be done with Miss Nivison except to proceed against her for violation of the burial laws. It is said the infants were mostly the children of wealthy women.

***
FULL TEXT (Article 2 of 4): Hammonton, N. J., June 6. – Miss S. S. Nivison of the Nivison Home for foundlings at Summit? Grove Place on the outskirts of this town, where the bodies of twenty-one infants were found buried, having died, it is charged, from improper treatment and lack of care, was found the Home yesterday. She was very indignant at the stories published and emphatically denied their truth. “A false, malicious statement,” said she, “has been circulated. The babies were all doing well when the measles developed and several died. All were more or less affected. The more sickly infants suffered the most. Secondary and pneumonia symptoms then set in and more died in one week, apparently from exhaustion. All were bottle-raised babies, especially delicate and only a few days or weeks old when they were received. There was an abundance of milk of the best quality and good nourishment provided. Twenty-one have died since the institution opened in January. All had been baptized and were tenderly buried with appropriate religious services at Summit Grove Place burying ground, previously set apart and consecrated. There has never been neglect nor secrecy in the care or burial of the babies. I say, emphatically, that it was entirely the reverse, as scores of visitors and attendants can testify. The infants and children surviving the epidemic are all doing well.”

May’s Landing, June 6. – The excitement of the people for miles around still prevails over the finding of the twenty-one dead babies at the Nivison Home near Hammonton. Criticisms of a harsh nature are freely expressed. It is charged that at least three fourths of the dead infants were the illegitimate offspring of wealthy Philadelphia and New York people in good society. Miss Nivison has not yet been arrested. Prosecutor Thompson of Atlantic county will take charge of the case, and in all probability order the arrest of Miss Nivison.

[“Miss Nivison’s Denial - Indignant At The Charges Against Her Home. - She Says That the Babies Died From Measles and Pneumonia, and Were Buried With Religious Ceremonies  Whose Offspring the Infants Were.” The Evening Herald (Syracuse, N. Y.), Jun. 6, 1884, p. 8] 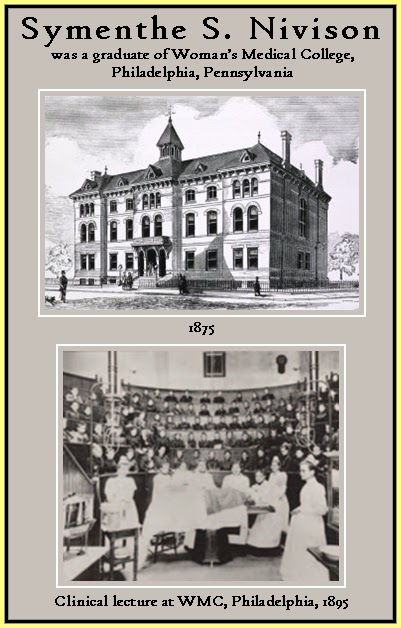 
FULL TEXT (Article 3 of 4): Hammontown, N. J., June 4. – This town, and, in fact, the whole country round about, has been thrown into intense excitement by the discovery that out of 23 infants which had been consigned to the care of the Nivison home, situated in the outskirts of the town, all but two had died: the fact of their deaths had been concealed and the little bodies buried in rude boxes in the yard back of the building. The Nivison Home for Foundlings is an annex to the Sanitarium for Invalid Women which has been in operations last January, under the direction of Miss Symenthe S. Nivison, said to be a graduate of the Women’s Medical College of Philadelphia.

Miss Nivison flooded the country with circulars setting forth the purposes of the Home couched in language of piety and philanthropy. What other methods she took to get the little ones into her care is not yet clear. But since the Home opened 23 have been received and 21 have died and been secretly buried. The first hint that there was anything wrong at the House was received by Dr. Ezra M. Hunt, Secretary of the State Board of Health, a few days ago. He visited the Home and found that the 21 little ones had not only died recently but had all died suddenly and without medical attendance other than that of Miss Nivison. In a number of cases even she did not attend the dying infants. The rough boxes in which the little bodies were buried were found in the house or were made on the  premises for the purpose. Several of the boxes contained two bodies each. There had been no certificates of death issued, and the bodies had been buried without permits. A funeral service had been said over only one of the victims, the Rev. Mr. Lewis, of the Episcopal Church, Chaplain of the institution, officiating.

After making these startling discoveries Dr. Hurt laid the fact before Prosecutor of the Pleas Thompson and, in the absence of the Coroner of the county, Mr. Thompson brought the matter before Justice of the Peace Clark P. Hill, who summoned a jury and held an inquest. Yesterday the testimony of the Home and expressed much sorrow that he had been misled into giving the institution his moral support. The Home for  Foundlings he said, was started last January, and in response to the circulars sent out by Miss Nivison, 23 infants were secured from New-York, Philadelphia, and other cities. Some time ago he visited the Home while Miss Nivison was absent, and finding an alarming mortality prevailing, urged the woman in charge to call in a physician. This she refused to do.

Miss Nivison herself was examined at great length. She is about 50 years old, tall, stout, black-haired, and rather imposing  in her manners. She answered the questions put to her as if she was teaching a class of pupils the proper way to care for her infants. She declared that the institution was conducted in a humane way, and the deaths oif the infants were merely a great misfortune. She said the measles caused most of the deaths. When told that several  autopsies made by Dr. Ingersoll had shown that no such disease had prevailed , she said that there were some cases of diphtheria and of other diseases perhaps.  As to the failure to take out permits for burial, she said she did not know they were necessary. The infants were buried in the yard, she said, because that was the burial ground she had selected for the institution. She said she was absent in New-York from May 13 to May 27, and during that period 11 of the infants died. While at the Home she was the physician in charge, and when absent she received daily reports of the sickness and deaths. She made no provision for medical attendance while she was away. During her absence her adopted daughter, Miss Martine, was in charge.

As to the medicines given to the infants, Miss Nivison testified that she made use of aconite. Belladonna, and morphine principally. It was, she swore, her theory that infants could be raised on milk and tea, combined with such medicines. Sge was so convinced of this that she was willing to make the experiment, and did so fearlessly. The morphine was administered according to this formula: “One grain of morphine in two-thirds of a cup of black tea, to be given as needed.” The chief food of the infants was milk and Irish moss. The washer-woman of the Home testified that the infants were improperly care for. The milk was watered until it was almost worthless, and there was no other food used to give the nourishment required. The infants, she said, were kept in cold rooms without enough clothing to keep them warm.

The jury visited the grounds and exhumed a number of the bodies. The verdict was:

“That the 21 children came to their deaths from natural causes, aggravated by improper sanitary conditions, negligence on the part of Miss S. S. Nivison in leaving them without proper medical attendance, and by incompetency on the part of the nurses.”

Miss Nivison was not arrested. She was left in charge of the two surviving infants. Her adopted son, whose name is Holiday, buried the infants in the yard. He went West yesterday before the inquest was begun. Miss Martine, the adopted daughter, also left here yesterday. Miss Nivison made it a condition that all the children put under her care should be completely surrendered. In her circular she made no mention of any plans for their welfare after they should grow up. After the inquest she said to a reporter that her sanitarium for invalid women had been in successful operation for seven years, and that she was well known. In her prospectus of the Home, which was started last January, and which she says is a charity to which thus far she has been the only contributor, she embodied letters from the from the Episcopal Bishops of Central New-York, Michigan, and New-Jersey. Among the Trustees of the Home, she says, are A. S. Barnes, the New-York publisher, and S. V White, the Wall-street broker. She claims that the children died from an epidemic. She says that some of them came from New-York hospitals and others were brought by their own mothers, who gave her a full surrender, and have never inquired for them since. Miss Nivison says she has herself borne the whole expense of the institution.

Nothing definite was learned as to the parentage of the little victims. The Prosecutor of the county has brought suit against Miss Nivison for a fine of $100 for violation of the law in regard to burial permits.

PHILADELPHIA, June 4. – Miss Nivison, whose Infant Home at Hammonton, N. J., has been the scene of such shocking mortality, came to this city for assistance when she was about to open that institution. She received much encouragement and material assistance from benevolent people. Prominent among these was Mrs. Martha Kimball, who has for years been identified with charitable works. “Every one is supposed to be innocent until they are proved guilty,” said Mrs. Kimball last evening, “I am shocked, however, to hear such a report. I have from the first advocated the interest of the home in this city, and feel grieved that such a rumor should be current, whether true or not. Miss Nivison was introduced to me by Miss Annie McDowell, a lady who writes much for the newspapers on subjects interesting to women. Miss Nivison has in her possession letters from the best people of the clergy of both New-York and Philadelphia. I furnished the home and George W. Childs contributed $100 toward its maintenance. The home, since its inception, has been supported by private subscriptions. Bishop Stevens, of the Episcopal Church, refused to have any money devoted to the best people have been interested in it, and also many in New-York. At one time Mrs. Astor, at her own expense, furnished the institution with a trained nurse. I have not been able to visit the home since I furnished it, on account of sickness in my family.”

[“Hurried To Their Graves. – Fatal Atmosphere Of The Nivison Home For Infants. – An Institution Opened Last January, Buries All But Two Of Its Twenty-Three Inmates In The Back Yard.” New York Times (N.Y.), Jun. 5, 1884, p. ?]

FULL TEXT (Article 3 of 4): Miss Nivison, the baby farmer of New Jersey, paid her fine for burying bodies without a permit, and so escaped hearing on a charge of causing the death of twenty-two infants.

NOTE: Hammonton is nowadays regarded as the “blueberry capital of the world.”

“A Refuge For Foundlings; Building A New Home Under Protestant Auspices. The Institution Planned By Miss Nivison, Where The Little Ones Will Be Brought Up In Pure Surroundings.” New York Times (N.Y.), Jan. 4, 1884, p. ?

“Hurried To Their Graves. – Fatal Atmosphere Of The Nivison Home For Infants. – An Institution Opened Last January, Buries All But Two Of Twenty-Three Inmates In The Back Yard.” New York Times (N.Y.), Jun. 5, 1884, p. ?