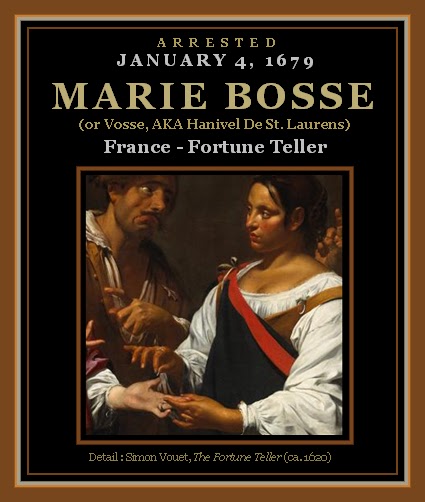 Wikipedia: Marie Bosse, also known as La Bosse (died 8 May 1679), was a French poisoner, fortune teller and alleged witch. She was one of the accused in the famous Poison affair. It was Marie Bosse who pointed out the central figure La Voisin.

Bosse, the widow of a horse trader, was one of the most successful fortune tellers in Paris. Unofficially, she was also a poisoner, who provided poison to people who wished to commit murder. By the end of 1678, Bosse attended a party held by her friend Marie Vigoreaux, the wife of a dressmaker, in the Rue Courtauvilain. During the party, she became drunk and boasted freely that she had become so wealthy by selling deadly poisons to members of the aristocracy that she would soon be able to retire. At the time, the Paris police was investigating poison sales in Paris. A guest at the party, the lawyer Maitre Perrin, reported the conversation to the police. The police sent the wife of a police officer to Bosse to ask for poison to murder her husband, and Bosse provided her with what proved to be deadly poison.

On the morning 4 January 1679, Marie Bosse was arrested with her daughter Manon and her sons, Francois and Guillame. Her older son was a soldier in the royal guard, the younger one was recently released from a working house. According to the report, when the family was arrested they were found in the only bed in the house and had committed incest. Marie Vigoreaux was arrested the same day, and was found to have close ties to the family, as she had sexual relations with all of the members of the family. Their confessions revealed that the illegal sale of poison in the capital was handled by a network of fortune tellers. This led to the arrest of the central figure La Voisin and the opening of the Poison affair. Marie Bosse confessed of having provided the poison used by Marguerite de Poulaillon in her murder attempt on her husband. Marie Vigoreux died during interrogation under torture 9 May 1679.

Marie Bosse was condemned to death by burning and executed in Paris on 8 May 1679. Her children and associates were also sentenced to death.


Marie Bosse, or Vosse, also known as Hanivel of St. Layrens, was involved in the infamous Poison Affair of the French Royal court in the late 17th century, the central figure of which was Deshayes Catherine Deshayes (“La Voisin”). Bosse was arrested January 4 1679 and executed May 10 of the same year. A huge quantity of “white powders” and mercury were found in her home. Following Bosse’s arrest her relatives provided police with a list of her clients. One client was a Lady Ferry whom Bosse has supplied with arsenic-coated shirts used to murder her husband. Other witnesses would testify regarding Bosse’s poisoning activities that had “been mixed up in it for twenty years” and that “she has broken fifty marriages.”