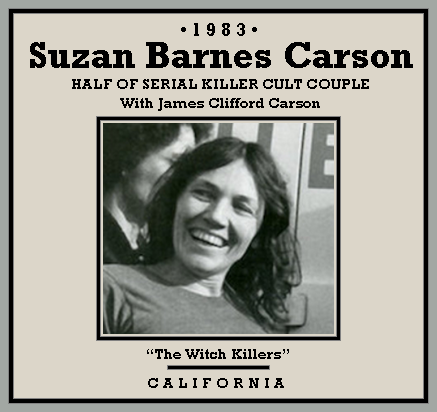 Wikipedia: James Clifford Carson (aka Michael Bear Carson) (born 1950) and Suzan Barnes Carson (born 1942) were serial killers reported to have been active in several countries and regions in the late 1970s and early 1980s - particularly, in the San Francisco Bay Area.

They were involved in the counter culture movement. Their crimes emerged from a shared missionary philosophy to exterminate individuals they believed to be "witches". The pair reportedly kept a list of targeted individuals including celebrities and political figures such as Johnny Carson and then-president Ronald Reagan.

After their arrest in 1983, they held a news conference confessing to murders, including those of Karen Barnes, stabbed and bludgeoned to death in her home in Haight-Ashbury in 1981, Clark Stephens, murdered and mutilated (dismembered and set on fire) in Humboldt County and John Hillyar, who was stabbed and shot on the side of the road in Napa Valley. They were also suspects in 9 other murders in Europe and the U.S.

“Witchcraft, homosexuality and abortion are causes for death,” said Michael Bear Carson, who with his wife, Suzan, described the killings during a five-hour interview Wednesday with the Chronicle and  KGO-TV.

Homicide inspectors from the San Francisco police and the Sonoma County sheriff’s office were also present.

The couple, who say they are vegetarian Moslem “warriors,” face trial in Sonoma County Superior Court in Santa Rosa over the January 1983 shooting death of Jon Charles Hillyar, 30. but they also said they had killed 23-year-old Keryn Barnes in San Francisco in March 1981 and Clark Stephens in Humbolt County in 1982.

Carson last month wrote to Chronicle columnist Herb Caen, complaining that his murder trial had received “no publicity in the more important press.”

“We insist on pre-trial publicity,” the bearded long-haired man said Wednesday, complaining that he hadn’t been allowed to air his opinions during a preliminary hearing last week.

Carson, 22, described Suzan as “a yogi and a mystic with knowledge of past, present and future events.” He claimed she had been sexually attacked by Stephens and abused by Hillyar, who said she was a “witch.”

“Susan ordered each killing,” he said as his wife sat beside him, half smiling.

The two said they had led a wandering life, from San Francisco’s Haight-Ashbury district to Europe, the American Southwest and other portions of California. They said they developed feelings of pacifism, came to practice yoga and vegetarianism and then converted to a form of the Moslem religion.

Mrs. Carson complained that Miss Barnes, who shared an apartment with the couple in 1961, faked a conversion to Islam and in fact was draining Miss Carson of her health and yogic powers.

During a hitchhiking trip home from Arizona, the Carsons were staying in an Oxnard motel room when Suzan “got orders” in her mind to kill their roommate.

“Each time Suzan said it, the thunder would clap,” Carson said.

After arriving back in San Francisco, Carson said, he bashed Miss Barnes on the head “as hard as I could, three times” and when she still made a sound, he stabbed her in the neck with a small knife.

Stephens, who allegedly worked on a marijuana farm near Garberville with the Carsons, was slain near the town of Alderpoint, Mrs. Carson said he was “a demon. He had to be killed.”

Carson said he shot Stephens twice in the head and once in the side and then burned the body and buried it beneath some chicken fertilizer.

Carson said Hillyer, whom the couple met while hitchhiking, “abused Suzan sexually” and therefore had to be killed. He said that was “part of the Koran.”

“You kill that demon or I will.”

Mar. 1981 – Karen Barnes (23) (no relation to Suzan), murdered; stabbed thirteen times and her skull crushed before being wrapped in a blanket and hidden in the basement.

Mar. 10, 1983 – Couple arrested; “The only way Michael and Suzan would confess, however, was via a press conference. A press conference was held, and it got pretty weird, pretty fast. The pair ranted about George Orwell’s 1984, President Reagan as the devil, and why witches needed to be killed. They said that Allah told Suzan where to kill the witches and Michael was the executioner for them. After six hours of ranting, the two were arrested for three counts of first degree murder amongst other crimes.

Date? – they were convicted of the murders of Stephens and Hellyar, for which they received sentences of 50 years to life and 75 years to life, respectively.

1989 – First District Court of Appeal, affirmed their third conviction as it had previously done on the other two convictions. 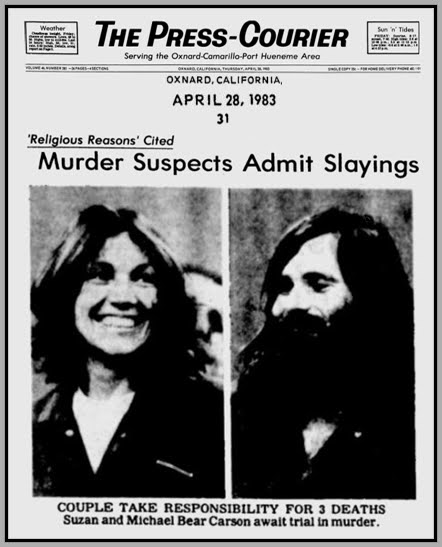 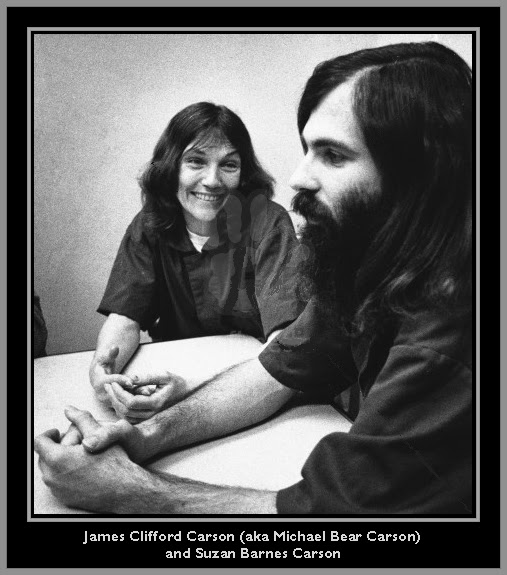 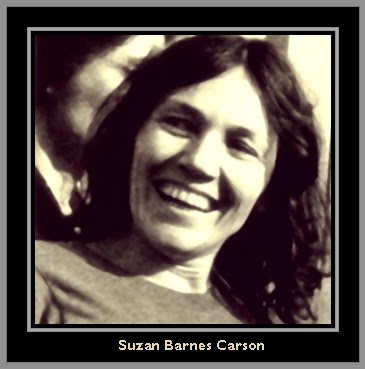 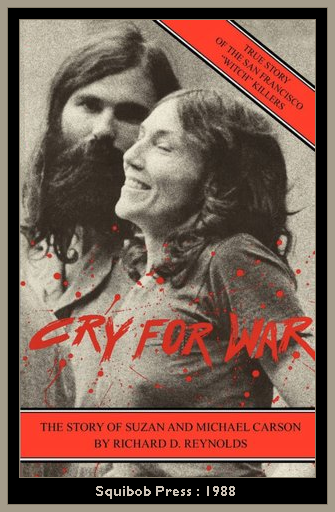 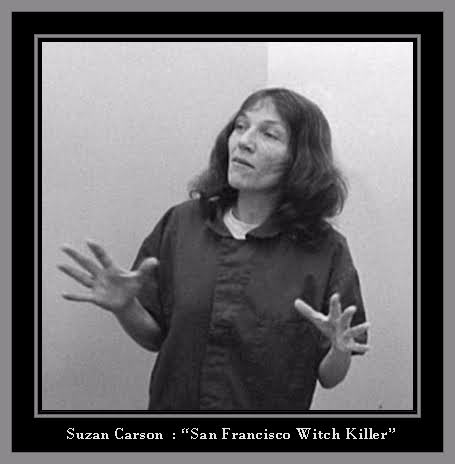 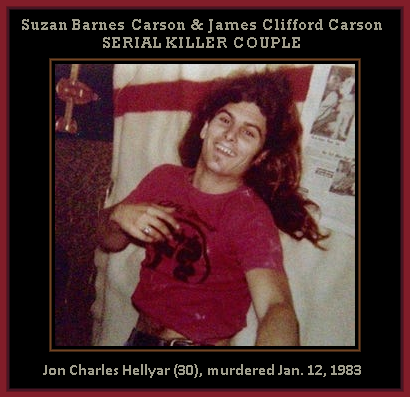 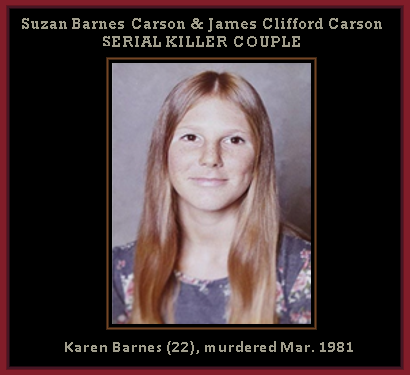 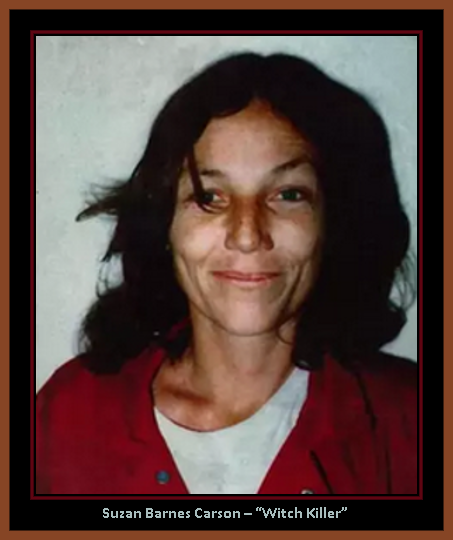 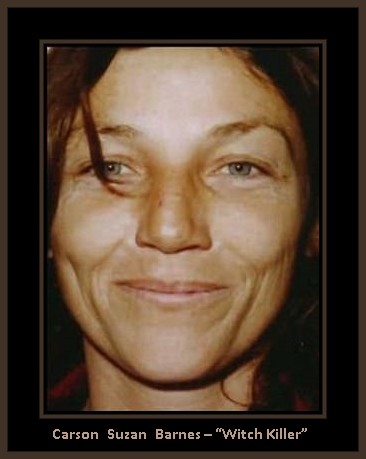