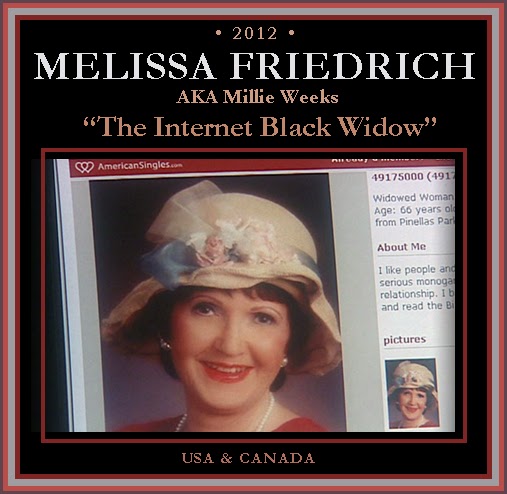 On September 30, 2012 in Nova Scotia, Fred Weeks, 75, almost died from poisoning. He was on his honeymoon, having been married to Melissa Weeks, 77, two weeks earlier. Melissa was arrested the next day. Melissa was a truly accomplished woman, “a busy little gal,” as one of her many victims remarked following her gazillionth arrest on Oct. 1, 2012, at the age of 77, for the poisoning and attempted murder of Fred Weeks, her newest husband of two weeks. It is believed she was born May 16, 1935, and was named Melissa Ann. Married for the first time in 1955, she was charged with over thirty counts of fraud and forgery between 1970 and 1985 and spent 5 years in prison. 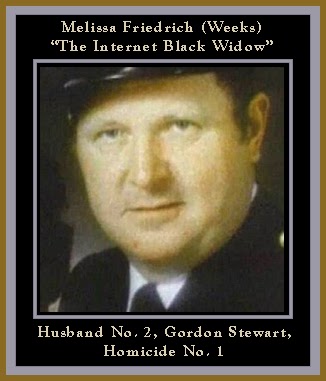 In 1988, still married to her first husband, Russell Shepard, she had an affair with Gordon Stewart, got a divorce and in 1990 Shepard became husband number two. On December 23 he was poisoned with benzodiazepine (valium and restoril) but survived. The couple had a number of fights and reconciliations – including a jail sentence for assault against Melissa – and on April 27, 1991 Melissa used her car to run over and kill her husband on a deserted road. Three hours later she reported his death. Non-prescribed benzodiazepine is found in his system. It was considered to be of a quantity sufficient to cause his death. She claimed she had been sexually assaulted by her victim but medical examination showed no evidence to back up her assertion. Melissa applied for pension money, benefits deriving from the dead man’s decades of work.

The remorseless widow returned to husband number one, Russell Shepard. On May 26, 1992 Melissa was convicted of manslaughter for Gordon Stewart’s death in Halifax and was sentenced to 6 years in jail. While serving time in Prison for Women in Kingston, Ontario she formed a support group for women. A documentary film “When Women Kill,” which prominently features Melissa and her battered women support activity is released in 1994 and her performance wins her a full parole. She continues in her new role as women’s advocate and in May 1996 Melissa sets up a toll free counseling line females in prison, called “Project Another Chance.” 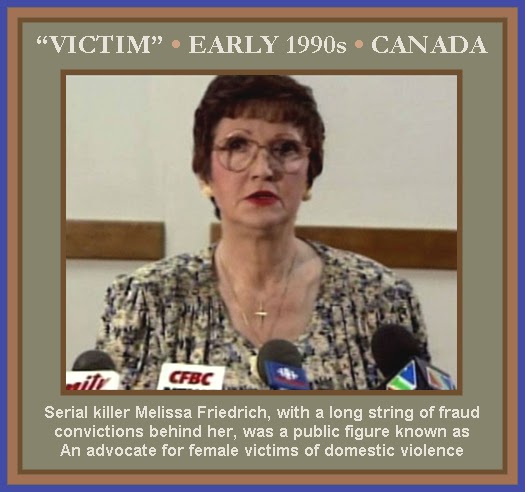 At a Christian retreat Melissa meets grieving Florida widower Robert Friedrich and soon after proposed to him. Friedrich became husband number three, wedding on June 23, 2000 in Dartmouth, Nova Scotia. Melissa starts slow poisoning Robert putting him in the hospital on several occasions. His son who filed a complaint against his step-mother. Melissa, however, has managed to get her sick husband to change his will making her his sole beneficiary. Then she finished him off. He died December 16, 2002. But her illegal acquisition of the prescriptions for the drugs she used in the crime and her manipulation of social security system, so she would receive benefits of the man she killed lead to investigations.

In 2004 Melissa discovered internet dating and jumped right into an updated version of the old lonely heats racket, contacting numerous men in search of her next prey. By the time the Royal Canadian Mounted Police are prepared to charge her for fraud, Melissa has left the country to connect with her next mark: Alex Strategos in Pinellas Park, Florida and moves into his house the same night, November 5, 2005. Later that night Alex was taken to hospital after falling down and hitting his head. Over a two-month period, Alex is hospitalized eight times and while hospitalized Melissa coaxed him to sign power of attorney over to her. Soon after, Alex Strategos’ son Dean saw unprescribed drugs (benzodiazepine) in his father’s medical report and blood tests. He also discovered around $18,000 missing from his father’s bank account. 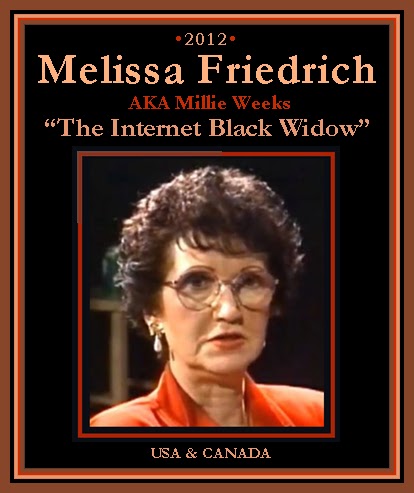 Mr. Friedrich died of cardiac arrest one year after marrying Melissa. Further investigation revealed that she had emptied his bank account of $400,000, and continued to receive his social security checks.

On March 14, 2005 Melissa Friedrich pleaded guilty in Florida to seven charges related to the Strategos case, including three counts of grand theft from a person 65 years or older, two counts of forgery and two counts of using a forged document. As part of a plea agreement, she was sentenced to five years in jail. Melissa was released from prison in Florida on April 4, 2009 and deported to Canada.

On September 28, 2012, Melissa Friedrich, now 77, married Fred Weeks, a 75-year-old from New Glasgow, New Brunswick. While honeymooning a few days later on Cape Breton, Nova Scotia, Mr. Weeks fell ill at their bed and breakfast, and had to be hospitalized. After nurses noticed signs that the patient had been injected with something, hospital personnel alerted the police. On October 1, Fred Weeks left the hospital a weaker but wiser man.

The day after her brand new husband walked out of the hospital, the police arrested Melissa on the charge of administering a noxious substance. The judge, at her October 5, 2012 bail hearing, denied her bond. 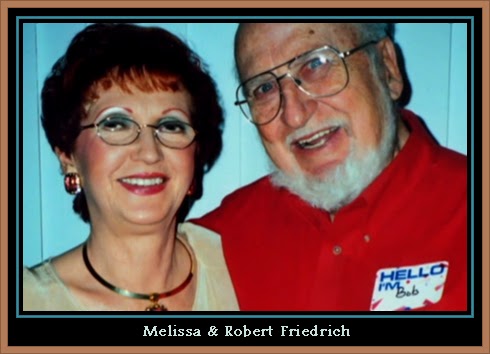 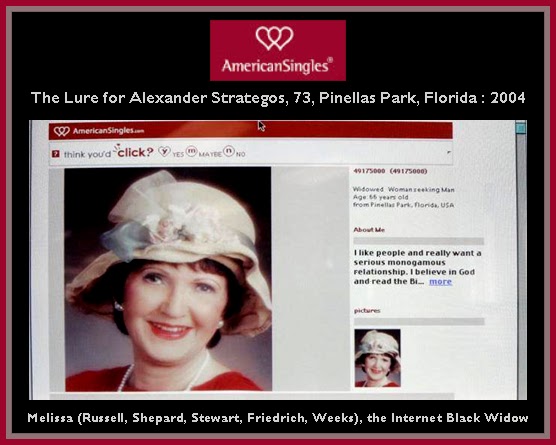 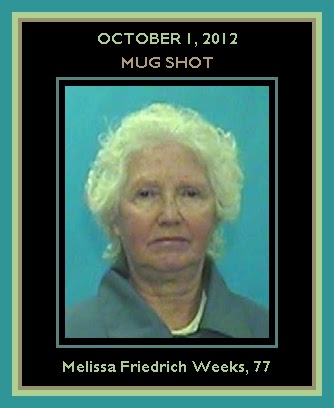 May 16, 1935 – Melissa Ann Russell, born, Burnt Church, New Brunswick, Canada.
1955 – Married Russell Shepard, husband No. 1.
1977 – Melissa has her first major scrape with the law, according to her criminal record. She's sentenced to 11 months in a P.E.I. [Prince Edward Island province, Canada] jail for forgery. Between 1977 and 1991 she spends more than five years behind bars for more than 30 separate fraud convictions.” [“Melissa Friedrich: Internet Black Widow,” CBC News Online Mar. 14, 2005]
1988 – still married to her first husband, Russell Shepard, she had an affair with Gordon Stewart.
Apr. 1990 – Divorces Shepard, marries Stewart.
1991 – Gordon is charged with and pleads guilty to assaulting Melissa. He serves time in jail. She visits with him in jail.
Mar. 26, 1991 – A probation order for Gordon stipulates that he is to have no contact with Melissa. Over next few weeks, she initiates contact upon several occasions.
Apr. 20, 1991 – Melissa and Gordon Stewart relocate to Dartmouth, Nova Scotia.Apr. 27, 1991 – Melissa runs over with car and kills her husband, Gordon Russell Stewart (44), on a deserted road.
1991 – The remorseless widow returned to husband number one, Russell Shepard. Investigators in Florida discovered that Melissa “had 13 aliases, several different birth dates, and at least two social insurance numbers.”
May 26, 1992 – convicted of manslaughter for killing Stewart, in Halifax; sentenced to 6 years in jail.
Apr. 1993 – first meeting of P4W Peer Support Team for battered women, Under the supervision of chaplain John Hess. The program was conceived of by Melissa.
1994 – “Melissa is featured in the National Film Board of Canada documentary Why Women Kill, about battered woman syndrome. She receives a grant from the Ontario government to set up a hotline for abused women.” Later, Melissa is paroled after serving two years of her sentence at Kingston Penitentiary.”
Jun. 1994 – released on “day parole” [M. S., Journal of P & P,1997]
Apr. 1995 – Melissa sets up a toll free counseling line for women called “Project Another Chance.” Incorporated in Apr. 1995 [Melissa Stewart, “Prison for Women's Invisible Minority,” Journal of Prisoners on Prisons Vol. 8 No. 1&2 (1997)]
Dec. 1995 – official start of “Right on Line.” Melissa had informally begun it in May 1995. [Melissa Stewart, “Prison for Women's Invisible Minority,” Journal of Prisoners on Prisons Vol. 8 No. 1&2 (1997)]
1996? – Barb McKenna article; Melissa sues the journalist.
1997 – Article published by Melissa: Melissa Stewart, “Prison for Women's Invisible Minority,” Journal of Prisoners on Prisons Vol. 8 No. 1&2 (1997)]
June 23, 2000 – marries Robert Friedrich, Husband No. 3, in Dartmouth, Nova Scotia.
Dec. 16, 2002 – Friedrich (84) dies; cause: cardiac arrest. The body was hastily cremated before his body could be autopsied.Melissa emptied his bank account of $400,000, and continued to receive his social security checks.
2004 – Melissa (69) discovers the internet dating process, contacting numerous men.
Nov. 5, 2004 – “After moving back to P.E.I., Melissa meets Alexander Strategos, 73, through an online dating service (AmericanSingles.com). She shows up unannounced at his home in Pinellas Park, Fla., and moves in.” “Neighbours say she introduced herself as one of Strategos' relatives from Canada. She told another neighbour that she was his wife.” [CBC]
Jan. 6, 2005 – Pinellas Park Police arrest Melissa and charge her with exploitation of the elderly, theft and forgery. Police say she coerced Strategos to give her power of attorney and then she siphoned off his money into her own bank account.
Feb. 1, 2005 – Nova Scotia RCMP issue a warrant for Melissa's arrest. She's charged with defrauding the government of Canada of $30,348.54 over a four year period.
Mar. 14, 2005  – Melissa pleads guilty in Florida to seven charges related to the Strategos case; sentenced to five years in jail.
April 4, 2009 – Melissa was released from prison in Florida and deported to Canada.
Sep. 25, 2012 – Fred Weeks nearly drove his car off the road (drugged by wife).
Sep. 28, 2012 –  Melissa Friedrich, now 77, married Fred Weeks, a 75-year-old from New Glasgow, New Brunswick.
Sep. 30, 2012 – Fred Weeks, 75, almost died from poisoning; Nova Scotia.
Oct. 1, 2012 – Melissa arrested.
Jun. 11, 2013 – sentenced to 3 ½ years in jail, less time served, for administering a noxious thing and failing to provide the necessaries of life.
Mar. 20, 2016 – released.
Apr. 12, 2016 – arrested; charged with 3 counts of parole violation. 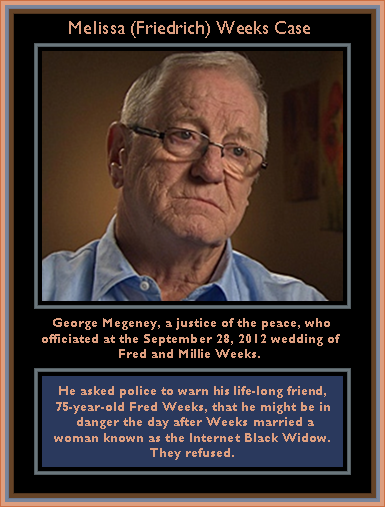 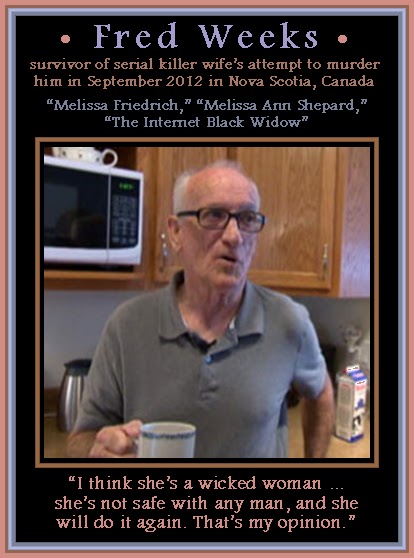 EXCERPTS: “She just wanted to know if I was lonesome the same as she was,“ “Yeah, she was very nice to talk to,” said Weeks. “She had a little religion in there, she was talking like she was always religious. That was the first lie.”

“Just exactly what she did,” he said, “she was trying to kill me … there’s no doubt in my mind.” “I think she’s a wicked woman … she’s not safe with any man, and she will do it again. That’s my opinion.” 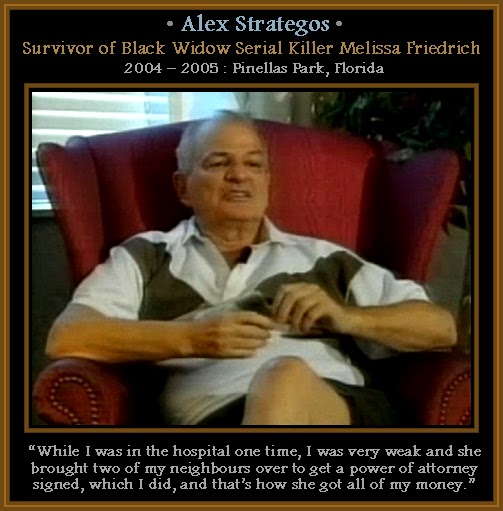 EXCERPT: Alex Strategos: “While I was in the hospital one time, I was very weak and she brought two of my neighbours over to get a power of attorney signed, which I did, and that’s how she got all of my money,” he said, adding the amount was $18,000. He said the bank reimbursed him later. [Jane Taber, “How a smitten man came face to face with the ‘Internet Black Widow,’” The Globe and Mail (Canada), Oct. 2, 2012] 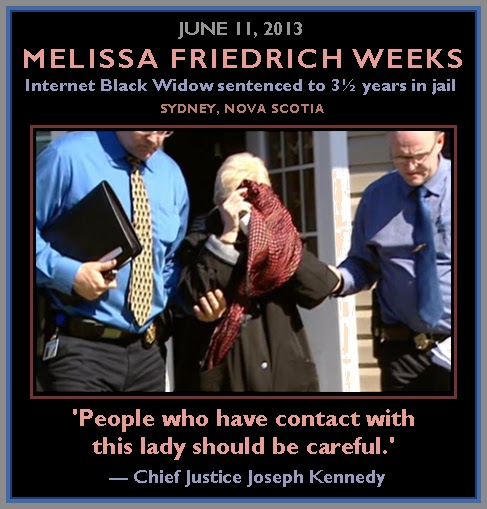 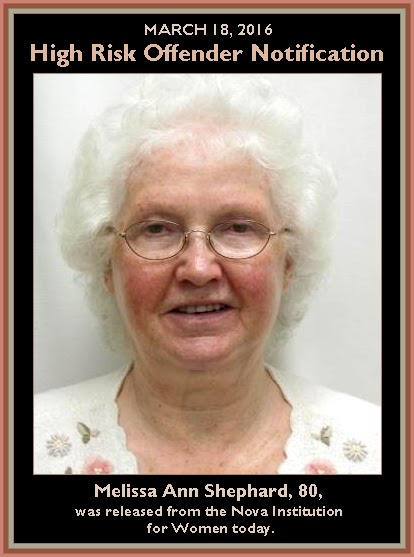 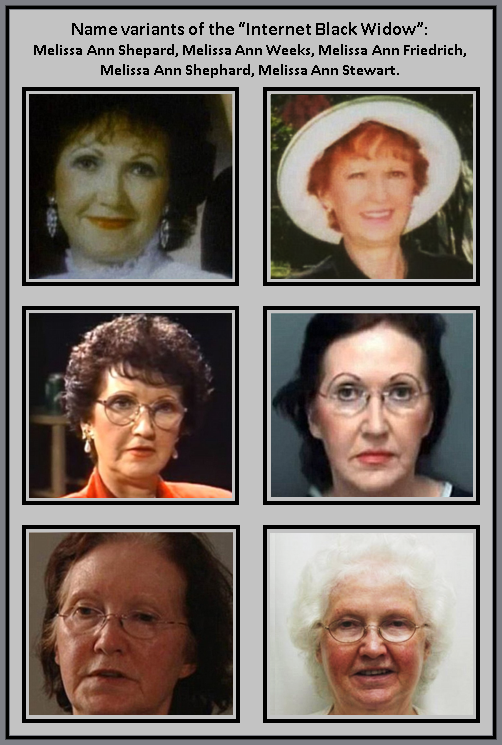 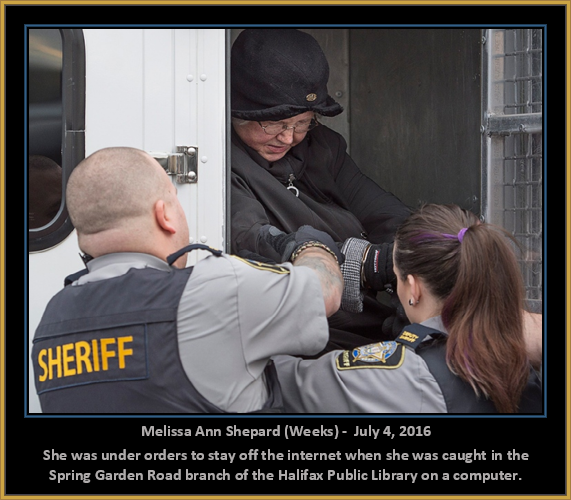 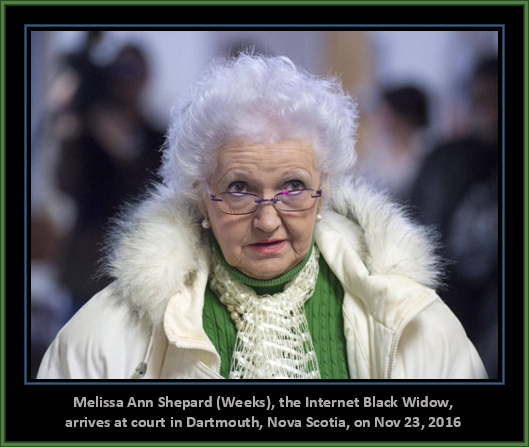 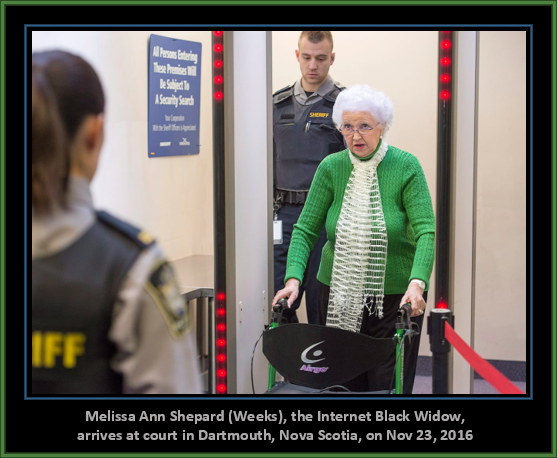 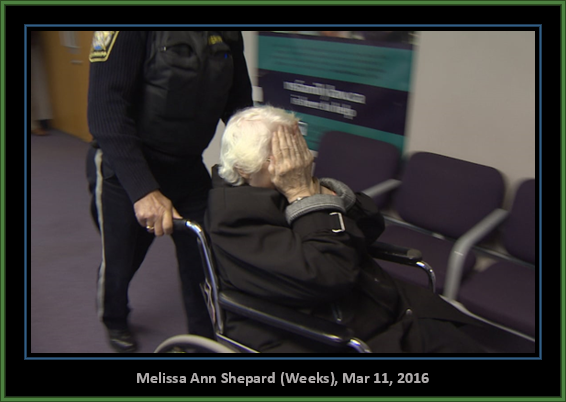