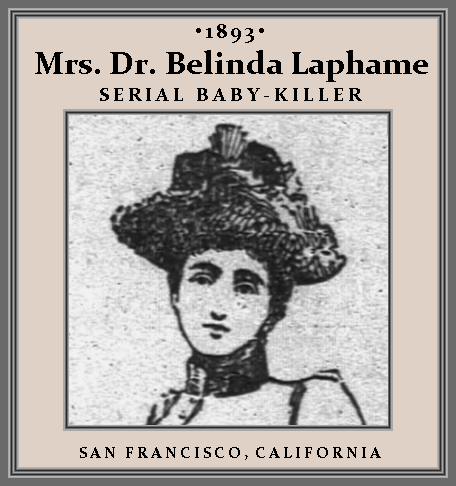 NOTE: Belinda Laphame (alias Mrs. Dr. Godfrey, alias Belinda Rozet, alias Dr. Goodman, alias Dr. Mary Goodwin, alias “Gypsy Queen.”), a midwife, was tried for three separate murders and acquitted each time. Two of the trials followed the deaths of abortion clients. One of them was for the murder of a two-day-old baby.

FULL TEXT (Article 1 of 3): San Francisco, May 3. – Lottie Watson, the young woman whose infant daughter Mrs. Belinda Laphame, the Geary street midwife, is accused of murdering, gave sensational evidence at the preliminary examination this afternoon. She said Mrs. Laphame kept in the house three small babies, which had been killed by her. Their little bodies were preserved in alcohol and the jars were kept in her room. When questioned by Judge Conlan she said the babies were all well developed and according to Mrs. Laphame’s remarks to witness had been born alive. They had been murdered by her because she could not get any one to adopt them. 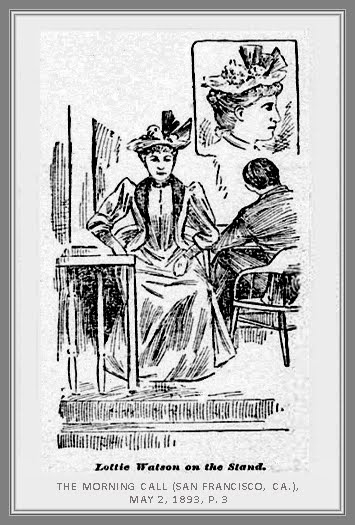 From the inquest testimony of Mrs. Watson, mother of the baby whose dead body was found to have contained opium.

EXCERPT (Article 2 of 3): “At home I have seen many new-born babies and I know that mine was weak and sick. Several weeks ago I hurt myself in stepping from a buggy, and I was afraid I should lose the baby. It didn’t cry much.”

The doctor said it was very weak. It would not nurse, so the doctor fed it from a bottle, but it only took a little.”

“I had it with me, but it got cold, and so she took it downstairs near the stove. I bad it with me some of the time— not half though. I don’t think — I liked to have it; but she said it was better downstairs. Besides I was awfully weak, and suffered pain all the time.”

“On Monday she brought me in a bottle of that stuff they say the baby died of. She said it had been bought for the other lady.

She gave me doses of it for a while. When she brought it to me it was empty from the bottom of the label up.”

“I saw my poor little baby about two hours before it died on Tuesday. After she told me it was dead I asked her to bring it up, but she said I had better not see it.”

“She cried some herself. She was always gentle and kind to it, and to me, too. I am awfully sorry for her.”

“Did you tell Dr. Laphame that you wanted the baby put in a foundling asylum?”

The girl smiled faintly. “Oh, no, I was for takin’ it away with v«. I wanted the baby. It’s my first baby.” She smiled again. 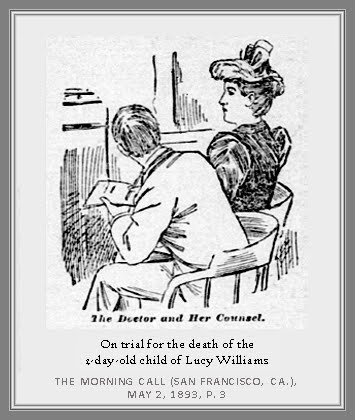 FULL TEXT (Article 3 of 3): There were some sensational developments in the Laphame murder case in Judge Conlan’s court yesterday afternoon when the preliminary examination was resumed. Attorney Ferral recalled Mrs. Mary Ann Watson, mother of Lottie Watson, who give birth to the murdered babe.

In answer to questions she said she never saw Mrs. Laphame give medicine to the child, but saw her give it to her daughter out of the bottle handed in in evidence.  The medicine was only given her daughter once while she was suffering pain and the bottle was left on a small table in the daughter’s room.

Judge Conlan, at this stage, said to Attorney Ferral: “I wish you would endeavor to control your client. Her unseemly levity will only hurt her case.” The rebuke had the desired  effect.

Mrs. Watson continued her evidence. She saw the child alive over an hour and a half before it died in the kitchen. She was not sure if any grown-up person was there at the time. She advised her daughter to get the baby adopted, as she did not wish to take it to Brentwood.

Lottie Watson was recalled by the prosecution, and gave some startling testimony.

“When the Coroner called at the house,” she said, “Mrs. Laphame came to my room and she had three or four babies from four to five months old in her besom which were preserved in alcohol in jars, and which she said she had taken out of the jars as she was afraid the Coroner might in his search discover them. She said she wanted to shield herself for fear of the detectives.”

“Why did you not testify to this before?” asked Judge Conlan.

“I didn’t remember at the time. A young lady had a baby on the Wednesday I was there, and it was also preserved in alcohol.”

This testimony created a profound sensation in court, and the defendant glared savagely at the witness.

“Do you think you could recollect anything else if you had more time?”

“Have you talked with any one about the case?”

“I might have spoken to my own people. I spoke with Mrs. Burmeister, my brother and mother about it.”

“Did any one speak to you about it?”

“Yea. Mrs. Maynard asked me why I had not told about the babies.”

“When did you first see the babies in the jars?”

“The first day my brother and I went to the house on April 8. We had been talking for a little, and then she showed them to me”

Attorney Ferral asked her to draw upon paper the size and shape of the babies, but as an artist Lottie was a signal failure.

“She said why did I not come sooner, and she could have attended me, and she then showed me the babies in the jars as an illustration of her process with other girls. I never asked Dr. Popper or any one else if that could be dime. The babies in the jars were in a closet in the dining-room downstairs where she kept her medicine bottles, and she told me if I had taken some of the medicine I wouldn’t have had any trouble at all. I told Detective Rogers about the babies to-day.”

Attorney Ferral pressed her hard with questions as to why she had not told the detective or others about the babies before, to all of which Lottie answered, “I didn’t like to tell.”

“I think it right to tell it now to save others from the same trouble. Mrs. Laphame showed them to me wrapped up in a cloth the day the Coroner was at the house, and she said she was going to burn them that night. She was crying and nervous at the time and afraid of being arrested.”

“Who was the first person you spoke to about the babies in the jars?”

“Mrs. Williams, the other patient in the house, as she bad also seen them.”

“On the Wednesday before I had my baby Mrs. Laphame showed me a baby which had been prematurely born that day.”

This closed the case for the prosecution.

C. L. Barrington, chemist, who made the analysis of the babe’s stomach, was the first witness for the defense, but he simply repeated the testimony he had already given.

Mrs. Amanda M. Brunkall, a dressmaker, testified to having known the defendant for the past three months. She saw her last on April 18 at her house. Mrs. Hogan and Mrs. Watson were, there in the kitchen.

“I went there,” said the witness, “at a quarter to 1 in the afternoon, stayed till a quarter to 7, left and came buck at a quarter past 7 and stayed till 8. A few minutes after I first entered Mrs. Laphame asked me to look at the two babies and said she thought one of them was dying. I said, ‘Don’t they (meaning the mother and grandmother) feel bad about it?’ and she said, ‘No, I don’t think they care; they won’t look at it.’ The grandmother came in and I spoke to her about it dying, and she said, Well, it will be better off.’ The baby died shortly before 8 o’clock that night.” 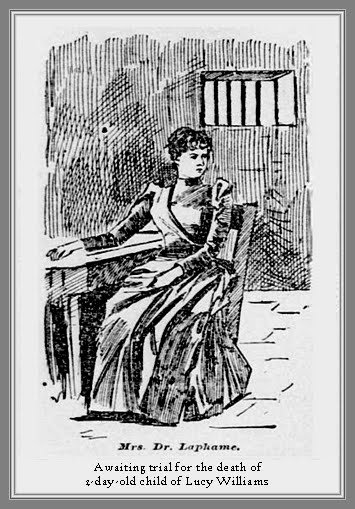 “I was in her house.” she said, “on April 18. I went about 5 p. m. and remained till 6. Mrs. Laphame told me to look at the two babies. One was very sick and in spasms. I helped her to bathe the sick baby in warm water.

“Mrs. Laphame said to me, ‘What will I do if it dies?’ and I said to send to an undertaker’s and get it buried. I then left, and immediately sent my boy to the United Undertakers on Fifth street. It seemed to be a nice healthy looking baby.”

In answer to Prosecuting Attorney O’Keefe the witness said: “The baby wasn’t dead when I left and I immediately sent to the undertaker’s.”

“Do you mean to say,” said the Judge, “that you sent to the undertaker’s before the babe was dead ?”

‘Yes, I saw it was going to die. It was getting black and blue.”

“Is your husband Pete Hogan, who was in my court to-day on a charge of vagrancy?”

Dr. O’Brien cave some evidence as to the result of the autopsy on the child’s body. Mrs. Laphame then took the stand and she proven a most unsatisfactory and intractable, witness. She was cautioned again and again by her counsel to only answer the questions put to her, but she branched off always and kept it in hot water all the time.

She said Lottie Watson told her the rather of the child was dead, and subsequently said she was to be married in the end of May to the son of a Baptist clergyman.

The man, who proved to be Lottie’s brother, told her to be very careful of his wife, meaning Lottie.

Defendant denied that she had ever shown Lottie any dead babies and never showed her the closet in the dining-room.

She denied giving Lottie any medicine out of the bottle produced in evidence and never made the remark, “What’s good for the mother is good for the child.” She would not give tincture of opium to any child or, in fact, anybody.

She denied taking the babies to Lottie’s room the day the Coroner was there, and never told her to say nothing about the babies or hew her own baby died. All she told Lottie was that she needn’t give her true name, as she and her mother were afraid of publicity.

She talked about knowing an undertaker named O’Connor on Mission street who buried her own child, but was stopped by her counsel.

There was no cross-examination. Mrs. Hogan was recalled by Judge Conlan, and said she called at 5 p.m., on April 18, and left at 6. The baby was then not dead, but had spasms.

The Judge wanted to satisfy himself as to the contradictions regarding the time the babe, was supposed to have died.

“This is not one of the usual preliminary examinations for murder,” said Judge Conlan.

I must say the conflicting testimony and the contradiction; of the witnesses are remarkable on both sides.

“Lottie Watson and her relatives are shielding each other as much as possible and it is the same with Mrs. Laphame and her friends.

“It is not worth while for me to review the testimony. The judgment before the. Superior Court on the charge of murder.”

Mrs. Laphame became quite hysterical. She kissed Mrs. Brunkall, laid her head on her shoulder and sobbed bitterly, she also kissed Mrs. Hogan and went below sobbing and crying as if her heart would, break. 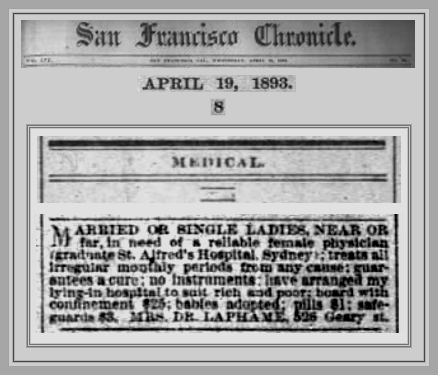 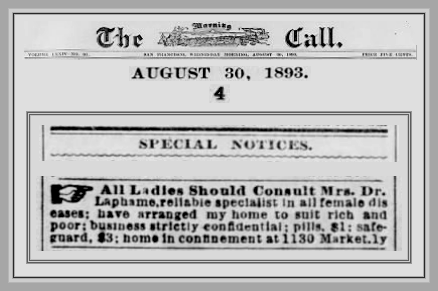 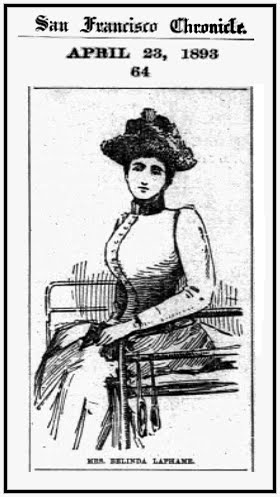