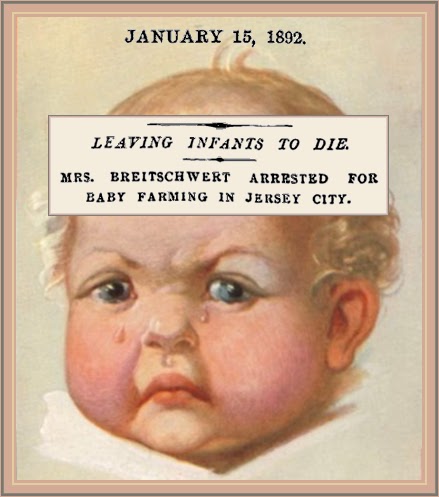 NOTE: This article reveals four actions which deserve to be described as premeditated attempted murders even though 3 of the 4 victims discovered were rescued before they perished.

FULL TEXT:  Mrs. Christiana Breitschwert, a midwife, living on l’alisade Avenue, Jersey City Heights, was arraigned before Police Justice Davis in that city yesterday on a charge of abandoned a babe in the street. The frequency with which little children have been found on the streets, where they had been evidently left to die, aroused suspicions that someone was conducting a baby farm in that city. One was found in a gutter on Tonole Avenue with not a stitch of clothing on it one cold and rainy night recently. It was rescued in time to save its life, and sent to Snake Hill [Hospital]. A second was discovered a few nights later on Bowers Street. It too, was nude, and exposed to the atmosphere of a bitter night. Its death from pneumonia followed soon after its discovery. A third, with hands and feet frozen, was afterward discovered on Prospect Street. It was sent to the Christ Hospital, nursed back to health, and is now in the almshouse at Snake Hill.

Police Captain McNulty detailed Detective McNalty to investigate the matter. The detective’s suspicions were directed at once to Mrs. Breitschwert, and a careful watch was set on her. her learned a day or two ago that she was to receive a baby for care from New-York. It came. A night or two later it was found lying on the sidewalk on Prospect Street. The clothing found upon it was identified as some that had belonged to the midwife, and the midwife herself had been seen in the vicinity of the place where the little one was found an hour or two before its discovery. The result was her arrest.

In court yesterday she vehemently denied her guilt, and begged the court not to bring disgrace upon the gray hairs of her parents and upon her daughter just budding into womanhood by sending her to jail. Her aged father cried with her, and her daughter pleaded with her to be brave, because she knew she was guiltless. Justice Davis consented to accept bail in $1,000 for the woman’s appearance for further examination to-morrow morning.