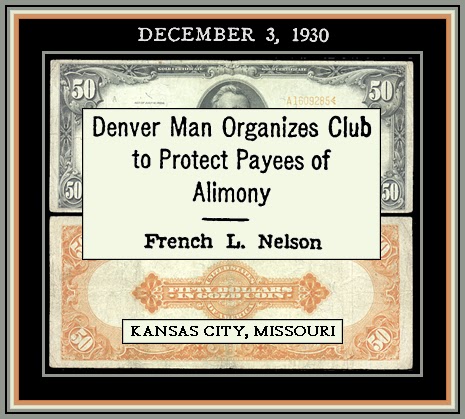 NOTE: The ambitious program outlined by Mr. Nelson was never realized. Nevertheless, knowledge of such unsuccessful efforts as this one helps us to understand the cultural climate of this period, left out of the history told by gender ideologues.

FULL TEXT: If the divorced men of America are looking for a Moses to lead them out of the wilderness of alimony and allied discomforts, French L. Nelson of Kansas City is willing to take the job.

Nelson, vice president of a steel tank company, is organizing the D. A. M. Association – its full name, he hastens to add, being the Divorced American Men’s Association. He is getting an attorney to draw up a charter, and he expects it to be nation-wide in its scope.

To be eligible for membership, one must be a divorced man. Remarriage will not disqualify a suitably divorced candidate, provided that the candidate is continuing to pay alimony or meet other obligations on account of a former wife.

Nelson says the chief purpose is to “uplift all men who have severed the relation of marriage.”

It is only fair to state that it started as a joke. But Mr. Nelson got so many letters from divorced men who wanted the thing taken seriously that he reconsidered.

One of the aims of the association will be to get legislatures to modernize divorce laws and revise alimony statutes, especially in states where husbands are penalized severely by the courts in the matter of supporting their ex-wives.

The D. A. M. Association will have chapters in all principal cities, Nelson says.

“All we ask,” observes its founder, “is that we be taken out of the class of galley slaves and be given our rights. Like Patrick Henry, we demand our liberty.”

He says the group will pay especial attention to providing legal and fraternal aid to divorced men in the first year of separation from their wives.

“Then is when a man has trying times,” he says. “Later, he adjusts himself to conditions and does not find it so hard to get along.”